In Quest of the Roman Numeral

(A Comment Concerning the CMP Workshop at Eastman, June 1969)

[As the title suggests, this is an article dealing with the concepts of tonal analysis, as well as an expression of concern for too much academic coverage at the lower level, allowing too little time for the development of aural and keyboard skills within major and minor tonalities. In SYMPOSIUM 9, in "A Report on the CMP Workshop at Eastman," William J. Mitchell says (p. 77):

. . . Roman numeral analysis was faulted for several reasons: It is incomplete and misleading when employed as a sole analytical device; its applicable limits stylistically are severe; within these limits, it creaks badly when the chromatic idiom dominates; it is introduced to students in too great detail and too exclusively, thus blocking the study of other constructive features of tonal music and other non-tonal or para-tonal styles.

From my own vantage pointhaving logged twenty years of teaching a correlative program of music theory on the lower level as well as the upper level and graduate courses, among other experience in theoretical problemsI am intrinsically aware of the large body of material particularly pertaining to music theory that must needs be thoroughly covered at the lower level. This is tonality, from the aural, analytical, and applied aspects. There is unfortunately too much vacillation among faculty regarding its importance. The trend now developing is to underestimate its values and write it away under "common practice." Because tonality involves a vast amount of technical materials, as well as several style periods contained within its history, more not less time must be given over to it. Required also is a correct and meaningful symbol system (Roman numerals) to store this data. A system such as is briefly outlined in this article would lend itself well to the new APL computer systems. Author.]

While the development of the comprehensive musician has been considerably broadened in its concept and scope through various efforts within the past decade, it would seem that, as a result, too much of our musical heritage, past and present, is being forced into the proverbial Freshman and Sophomore years of the Baccalaureate degree in music.

Some recent two-year texts, as well as published pilot syllabuses, reflect open-endedness to the extent that the whole gamut of music history, literature, theory, counterpoint, fugue, composition, form, analysis, and styles, from the chant to electronic music, is now amalgamated into a package deal.

With such a vast coverage there remains little time (if any) in the laboratory or classroom, or space in the text for the inclusion of the science of music theory and its pedagogy, to say nothing of the absence of materials suitable for the development of aural skills more advanced than mere melody, intervals, and rhythm.

It cannot be denied that the whole system of tonal functions, harmonic textures, chromatic alterations (or scale mutations), modulations to related or distant keysthat body of musical materials from the period of 1700 onward to the dissolution of tonalityis an important and vital area for study and observation. Yet it is also one which is, for some, problematical and too consuming of time. Obviously, more than two years of the undergraduate program must be required to adequately observe also the history of the science of music theory as it progressed from the modes and linear textures to major-minor tonality with the clarity of its functional chords, nonharmonic tones and form, finally to atonality. It would be a travesty to regard any of this theoretical investigation as being stodgy or pedantic.

The vertical structures within clear tonal areas are constant and orderly enough to allow classification of them. That is to say, it is possible and profitable to decipher the phenomena of the diatonic and altered functions in tonal music. The functional chord, somewhat comparable to the erg in physics, is distinguished by the work it does in its key. Functional chords establish either a forward motion to the tonic (normal progression), or a reverse motion away from the center (retrogression). Normal progression occurs when chord roots move by the interval of the perfect fifth in the direction of the tonic. Thus, four distinct classifications exist (See Illustration 1a). While only triads are shown, each chord in the classification may function also as a seventh or a ninth chord.

ILLUSTRATION 1a. Normal Progression of Diatonic Chords in Major and Minor Keys.

Chordal functions containing one or more altered scale degrees exhibit normal progression when their roots move by perfect fifth intervals in the direction of the tonic (See Illustration 1b).

ILLUSTRATION 1b. Normal Progression of Altered Chords in Major Keys.

It should be noted, however, that a great many more altered functions are contained in major keys than those shown in the illustration, and they are present, in lesser numbers, in minor tonalities.

Within major keys certain chords, such as the subdominant and dominant, assume functions in other classifications when altered scale degrees are contained in their spellings. Even the tonic chord, when altered, admits of classification. For example, the I with raised fifth (C-E-

in C-major) and I with lowered seventh (C-E-G-

) are contained in the third classification and usually progress to the second class subdominant. The V7 with raised fifth (

-B-D-F) becomes a remote fourth class function and its root moves stepwise upward to the root of the third class submediant chord. The augmented triad (F-A-

) is also displaced to the third classification. Within major keys alone, some eighty diatonic and altered functions are found to exist with a certain degree of frequency. Included are triads, seventh chords, and ninth chords of various intervallic components, as well as the first and second classification augmented sixth chords.

Quite to the contrary, Roman numeral analysis is not incomplete nor misleading, especially when the chromatic idiom dominatesas it does in much music of the Romantic period. If the classification movement of the chords is observed, and the placement of the altered scale degree occurs with the numeral analysisfor example,

/IVa much greater sense of the grammar of tonality obtains. Of more importance to the analyst is the existence of the raised fourth scale degree in a functional chord, not the attending information that the chord in its isolated state is also the dominant-of-the-dominant. Tonality is exclusively a product of functional chords, diatonic or altered, at work within a specific key. Not all tertian constructions are functional. If a thorough study of the phenomena of tonality begins early enough (preferably in the freshman year) and is well correlated with dictation and keyboard, students do not consider the observation as stodgy and pedantic, but rather, a highly exciting experience. They too, find they can improvise or compose stylistic syntheses. 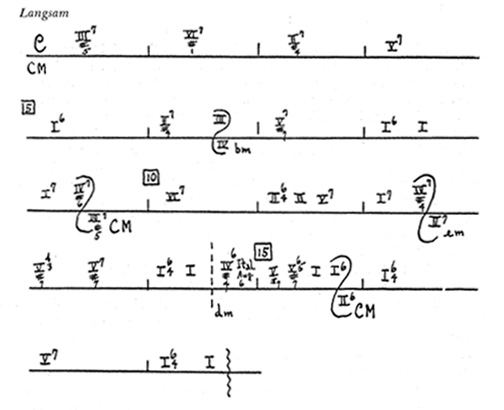 Each segment is equal to one measure. The harmonic rhythm (the rate at which chord functions progress) is basically slow with about one function per measure. The song is constructed in a modified strophic form (A1bridgeA2extension) and the material of measures 1-16 recurs, with a slight melodic modification, in measures 19-34.

In section A1, the tonal centers CbCedC are clearly established through the progression of each chord according to its classification, and each of these movements culminates with the tonic chord. Not only does the classification of the chord (diatonic or altered) delineate the key, it also clarifies the exact point of modulation. The tonic chord of measure 5 progresses to the second class supertonic with raised fourth scale degree on the first beat of measure 6. Instead of continuing its normal progression to the first classification, there occurs a retrogression to the mediant, a remote fourth class chord. Measures 7 and 8 contain forward motion to first and second class chords, and finally the tonic of b-minor, a foreign key. Therefore, the mediant triad in measure 6 no longer continues functional progression in C-major, but assumes the second class function of IV in b-minor. At measure 9, a diatonic chord terminates b-minor and at once becomes the remote fourth class altered chord of C-major. The related key of e-minor is also attained by functional common chords (measure 12), and again, clearly evident are the movements of second classification to first classification to tonic. Of most interest, however, is the appearance of the Italian augmented sixth chord (measure 14) arrived at by the chromatic movement of G, the third of the e-minor tonic, to

, the root of the augmented sixth chord. A glance at the forward motion (containing the chords A-

-E and D-F-A, measure 15), indicates immediately that the Italian sixth chord is functioning as a second class chord in the key of d-minor.

Indeed, if the frequently occurring altered scale degrees are known, and even more importantly, how the tertian constructions containing them are classified, the analyst and trained listener as well speed up their perception of the presence of tonality (or the absence of it), and modulation is more rapidly and correctly determined.

Perhaps it is not the Roman numerals, functional harmony, and all else that is implied, which have faulted, but that too much of the advanced academic work of the specialized fields of concentrationparticularly music history, composition, modal counterpoint, and musicology (in effect, material coverage clear through the doctorate)has mixed and filtered down into the requirements of the lower level of the Bachelor of Music degree. This situation, perforce, necessitates that only the Ph.D. or D.M.A. professor is fully qualified to teach these lower level courses. An even more startling question poses itself. How open-ended may course offerings and degree requirements be, and yet maintain the specific music degrees which exist? Will this blending of skills and subjects eventually lead to the following catalogue course descriptions: Music 131; Music 231; Music 331; Music 431; Music 531; Music 631 (Thesis)? Only time will tell.