There are over five hundred electronic music studios in this country, a studio being defined here as a space containing electronic music production equipment and specifically set aside for electronic composition. Most of these studios were installed within the last five years; most of them are in colleges, conservatories, or universities and can, therefore, be classified as "academic studios," as opposed to private and commercial installations. Academic studios are used for teaching, composition, research, and many peripheral functions such as acoustic recording, public demonstration, tape copying, and listening. Most of these studios contain only analog equipment and are housed completely within one room. Having lived with these studios for a little time, we may begin to evaluate them. Is the average one-room studio efficient in concept, and can it do the job required of it by the latest generation of users?

Five years ago use of the academic electronic music studio was limited largely to musicians. There were a few well-equipped centers of electronic music production and research worldwide; however, many of these were fashioned along the lines of the famous "classical" European studios at Cologne, Paris, Utrecht, Milan, etc., with independently controlled analog equipment grouped by function: production, processing, recording. The systems concept of the voltage controlled electronic music synthesizer, first made really practical by Donald Buchla and Robert Moog, was just at the beginning of its phenomenal rise in popularity and acceptance. Electronic music and musique concrète were still avant-garde, despite a long and distinguished history, and had not yet been taken up widely in advertising or pop music or in the media and, as testified to by Jon Appleton's humorous Newark Airport Rock, the average person was unlikely to have any conception of what the term "electronic music" even meant.

This picture changed radically with the release of Walter Carlos' Switched-On Bach in 1968—the largest selling "classical" record in the history of discs. Overnight the term "electronic music" entered the public consciousness. It was on the radio, on TV, in the new sound of trend-setting rock groups, in the concert hall with symphony orchestras and chamber ensembles. The counterculture adopted it too, as the people who had been "into" Ravi Shankar, sitars, and ragas, now became excited about Karlheinz Stockhausen, Pierre Henry, John Cage. At the university new people were knocking at the studio door: film makers, painters, kinetic sculptors, actors, dancers, and poets. Many were discovering a use for electronic sound in multimedia events, on film sound tracks, in environments. None of these intermedia alliances was new, but never before had electronic music and its possible applications been accepted by so many, and this electronic music consciousness had to have an impact on the academic studio.

At the Dartmouth College Electronic Music Studio (where I was Acting Director, 1970-71) the situation is something like this: a student or faculty member visits the studio out of curiosity. Almost immediately he has a project to propose involving the use of some studio equipment. He needs a sound effect, or he wants to process his rock group through the Moog, or he wants to make a piece or specially edit a tape he has made. The routine answer to his proposal is always discouraging. He must first take an introductory course that meets only once every three terms, the course is already full from a long waiting list, and there is barely enough studio time for regular studio users. This situation is as discouraging to the teacher as it is to the student, because experience has shown that electronic music is a natural door to other kinds of music. Electronic sound production is accessible to the non-musician as well as to the trained musician. Through it many glimpses are inevitably revealed of past and present instrumental music, of the composer's and performer's art, of the logic of certain kinds of form building. The ear and the mind are sharpened—inevitably.

Why can the studio not fulfill this visitor's demands, at least up to a point? The solution is not to take more students into formal electronic music courses. Each student in a regular full time course must have a reasonable amount of independent studio time, like the practice time provided for and expected of any performance student. At Dartmouth we define this reasonable time as 5 to 7½ hours per week. Allowing for the other essential uses of the studio, how many students can you possibly admit at once? Nor is it practical for electronic music studio directors, who have other teaching responsibilities, to substantially increase their loads. And creating a new faculty appointment for electronic music teaching is not likely to receive much endorsement from administrators.

To solve the dilemma first it is necessary to determine exactly who are the new generation of studio users. Secondly, the academic electronic music studio must be divided according to its functions. When this is done a pattern should emerge relating each user to a specific studio function (see schematic diagram). 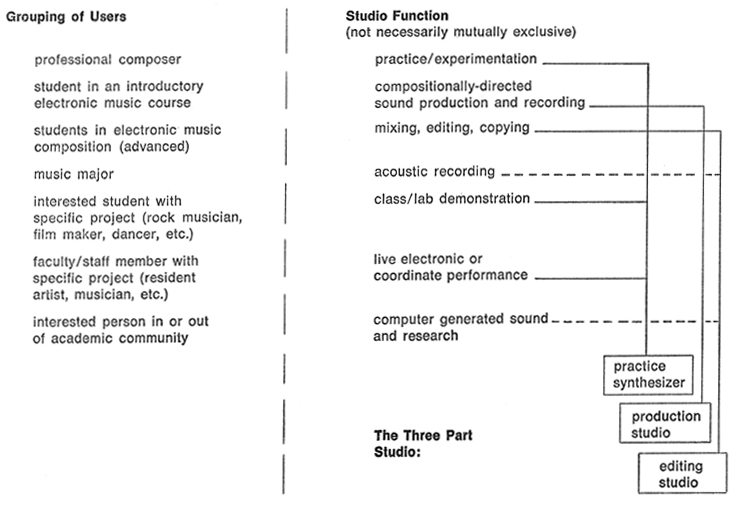 It now becomes clear that the one-room, one-synthesizer concept is obsolescent and that what is needed is a three-part electronic music studio consisting of a practice section, a production section, and a mixing/editing section, each of which can be expanded or modified independently. The three parts are not derived from the divisions of the electronic work process (sources, modifiers, recorders) but from the natural divisions of user needs.

The diagram indicates who most needs what in the electronic music studio. Composers need to have access to the most equipment, beginning electronic music students relatively little. Practice and experimentation need not be carried on in the regular studio, since this ties up the recording facilities in that studio. A miniature synthesizer like the Putney, Arp 2600, mini-Moog, or Electrocomp could be housed separately with a relatively inexpensive recorder to form a practice studio. This unit, completely portable, could be taken onto the concert stage for live performance, into the music theory classroom for an acoustics demonstration, or into a lecture hall on or off campus for a basic electronic music demonstration. It could also be the basis for an informal workshop in electronic music. One could set up a complete portable practice studio for $2,000 to $2,500, or about half the cost of a grand piano. For an institution with a really small budget, this would be a good place to begin an electronic music program, for no other single studio can be as versatile.

The production studio would probably contain a complete stock synthesizer (about $7,500). In practice many studios order extra modules of various kinds totalling perhaps $2,000 to augment the basic synthesizer. This expenditure could be eliminated if a practice synthesizer were purchased, since the practice synthesizer could be brought in to provide extra functions when actually needed. The production studio would need a minimum of two professional recorders, which can be budgeted at $2,500 each, and a good studio mixer and patch panel complex, $3,000. It would also require monitor speakers and amplifiers. Some independent equipment would be desirable but not absolutely necessary: a variable speed device, a special reverb or filter, a Dolby unit, an oscilloscope, a record player, etc. In summary, the production studio would contain everything the composer needs for electronic composition, considering that the portable synthesizer is "on call." Thus the cost of practice and production studios together need not exceed the cost of one well-equipped conventional studio.

The diagram shows the practice and main production studios and a third which we will call the editing studio. The editing studio is not a particularly novel concept. At the Studio voor Elektronische Muziek in Utrecht, Holland, the editing studio contains several tape recorders, monitoring equipment, and an elaborate mixing and signal routing system. The reason for a separate editing studio is that much of the work in "classical" electronic music composition involves montage of previously produced tapes. Most pieces were literally made by sticking together discrete sections. This work could be done independently of production equipment. Despite recent sophistications in the analog studio in the areas of programmed control, editing of this kind still takes place, and for many composers takes up most of their composition time. Then there is the endless copying, the re-mixing between mono, stereo, and quadrophonic stereo, and the preparation of concrète sound recordings for the synthesizer processing. Other users are also best served by a simple editing studio: the student who wants to make a simple musique concrète tape, the computer composer who has just had his latest work converted to analog tape, the rock musician who wants to dub a special effects tape, the student who wants to hear and copy a tape piece from the library.

The editing studio will need three (or more) recorders, monitoring equipment, and a good mixing and signal routing system with trunk lines that can connect the editing studio temporarily with production studio equipment. Such a mixing system could be expected to cost $5,000. The extra tape recorders, on the other hand, could conceivably come free if the following simple plan were worked out. Most academic institutions have at least one audio engineer available for language labs, recording of important functions, and the maintenance of classroom audio aids. The audio department is likely to have professional tape recorders of its own. Why not make them the nucleus of the editing studio? By this arrangement, the audio staff has access to special items of studio equipment such as filters, reverberators, and test equipment, while the electronic studio gains the presence and cooperation of a qualified technician. If these recorders are placed on dollys they can be taken to other locations—even into the production studio—for special purposes. The trunk lines between the two studios make possible a further use of the production studio: acoustic recording with the editing studio as a control room. Moving the practice synthesizer into the editing studio creates a second complete production studio. Installing a computer link up there could make it into a digital synthesis center or origin of computer control of the analog studio, and so on. There are innumerable permutations of the three part studio system, and it is precisely this flexibility that is required of the electronic music studio today.

The three part studio system as outlined here nearly triples the effectiveness of the conventional one-room studio in meeting the requirements of present studio users, yet it could conceivably be adopted for only one-half again the total cost of a conventional existing studio. Digital synthesis probably will not replace analog, but complement it, and we may expect many new demands upon the analog studio for research in the areas of sound modulated video, laser, and biological functions. The academic studio of the 70's will have to be flexible and resourceful in anticipating the many new demands of the new generation of users