The music of Josquin des Prez has long been admired for its compelling compositional logic. One marvels at the consummate integration of the simplest motivic cells into large musical structures of architectural perfection. Thus quite understandably, for centuries, teachers of composition and analysis have recommended to their students a detailed examination of Josquin's works.

Such investigations are pursued with the hope that each aspiring "Josephus" will discover the means by which Josquin carefully plots the organization of musical events and achieves macroformal coherence. But strict emphasis upon such macroformal organization, perhaps, obscures the beauty of individual parts. The same shaping elements which contribute to the music's overall pacing are just as vital to Josquin's conception of the smallest phrase gesture. As an analogy, witness the abundance of Bach fugal subjects, which often display their own architectural integrity prior to absorption into the contrapuntal fabric. Individual phrase gestures of a Josquin motet, as in Bach, have just such a well-defined shape.

It is suggested that the microformal aspects of Josquin's compositional technique remain largely unexplored.1 The purpose here is to demonstrate that specific properties of architectural pacing, such as preparation, propulsion, climax, compensation, in general tension and release, all aspects of large structural designs, are clearly evident in the small constructive units of Josquin's music. Although not every fragment of every motet will display equal completeness, there is sufficient evidence to warrant serious appraisal. My examination is limited and suggestive, not exhaustive and definitive. Three excerpts from the justly famous Tu Pauperum Refugium (the secunda pars of the motet Magnus es tu, Domine) are offered. They have been chosen for their strategic positions as opening, reprise, and final cadence.2 The first of these excerpts, the opening five measure unit, is cited below:

Unfortunately these well-worn measures have often borne the brunt of myopic analyses restricted to harmonic content.3 Although even a cursory observation reveals a limited harmonic variety, one should not undervalue this modest harmonic usage: by its very inactivity, the harmony allows other shaping elements to surface as informationally influential. The pacing of this initial phrase is illustrated in Ex. 2.

Three segments of the gesture are identifiable: (1) a preparatory motion which generates the idea; (2) the actual apex of the phrase; (3) the concluding motion which releases the tension. All phases are audibly discernible and controlled in perfect alignment. As might be expected, the propulsion of the idea occupies a notably greater amount of time than the apex and compensatory phases. The idea unfolds gradually with each voice evolving from the opening sonority. It is as if each layer of the texture animates at a different point, permitting the music to develop steadily until the climax is attained in the fourth measure. In the final segment of the gesture, the chordal finalis, upon being reached, might well have terminated its activity immediately, yet it metrically persists for a full measure. In so doing, the additional measure, equal to one-fifth of the total time span, creates a more architecturally balanced phrase.

Clearly there is nothing complex about the gesture. Indeed, it is the simplicity of the music which bespeaks its poignancy. Thus protracted analysis may seem somewhat superfluous; yet all the architectural phases traditionally associated with large structural designs are at work in this five measure module. Furthermore, it becomes increasingly apparent that this "fragment" is not at all fragmentary; rather, it is a microcosm of Josquin's gestural control. Next consider the reprise of the opening phrase as it appears in measure 34.

The surface similarities of Examples 1 and 2 are clear and need little explanation. In comparison to mm. 1-5, the harmonic underpinnings of Example 2 are plainly derivative. Again, the harmonic vocabulary here is proportionately inactive. This factor, as well as the soprano's retention of the fundamental melodic contour, as first expressed in the opening measures, assure the architectural clarity of the macroformal plan. Of special interest, however, is the morphology of the substructural events, illustrated below:

It is the textural rhythm of mm. 34-37 which creates the propulsion. Whereas in mm. 3-4 the dramatic octave leap of the bassus generates motion towards a climax, mm. 35-6 employ an equally powerful rhythmic dialogue in the inner voices. It is a small but nonetheless ingenious variation. Notice also in measure 36 the catalytic effect of the tenor's silence. The textural and rhythmic consistency of the complete phrase, which by measure 36 has advanced a certain expectation of continuing sound, is interrupted by the simple but consequential abolition of a single note. Thus the peak of this phrase is intensified by the tenor's momentary "abdication." The contention that the tenor rests in the interests of avoiding parallel unisons must be rejected; for the textually emphasized re-entry on the accented syllable "Do" contributes too much to the rhythmic fabric to be considered the mere product of haphazard coincidence.4 Taken separately, each of these events may seem insignificant, but together they comprise an inventive variation, which, enhanced by the metric alteration from binary to ternary, is refreshingly new yet architecturally parallel to its opening measures' complement.

A third instance of microformal balance is found in the final cadential gesture. This concluding phrase, as seen in Example 5 below, continues for eight measures after the tenor entrance at the end of measure 61.

The Phyrgian finalis is actually reached in measure 66 and might have suitably ended there. Josquin's decision to continue the music another three measures seems appreciably better. This "extension" starting at .63 of the time span of the overall cadential movement's pacing, and this time heightened by a delayed bassus entrance, permits a gradual relaxation of the previous contrapuntal discourse. The plagal embellishment in measure 67 further shapes this terminal cadence.5

Depending on how phrase divisions are assigned, (according to the strengths of textual delineation, cadential articulation, and the thorny problem of phrase overlapping), as many as eighteen distinct phrase gestures may be delineated.6 Each, to varying degrees of course, exhibit the three phases of preparation, apex, and compensation, as discussed in Examples 1 through 3. Still, one must remember that Josquin was not a composer of mosaics. Each segment of the work blends into the next. Nor does the unity of each inseparable phrase lessen the smooth elisions between phrases or the architectural wholeness of the entire motet.

Ultimately then, it is essential to view separate gestures as organic units, eventually synthesized within the overall design. For while it may at first appear incongruous, each musical gesture is simultaneously complete and embryonic, thus guaranteeing the music's homogeneity. Therefore it should be noted that the pacing identified in the small divisions discussed above is noticeably similar to the pacing of larger formal sections. Three observations, illustrated in Example 6, are submitted regarding the macroformal scheme of the motet: 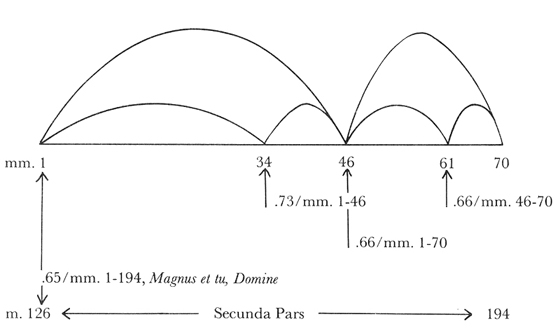 (1) While the second verse, signaled by the aforementioned characteristic Josquin metric alteration, begins at measure 34 (see Example 3), the approximate mid-point of the secunda pars, the binary meter's reappearance in measure 46 is the two-thirds point of the total sixty-nine measure section.

(2) Taking measure 46 as a structurally significant juncture, measure 34 now assumes its own strategic importance as a dividing point (.73) in the forty-six measure time span. Likewise, the final third of Tu Pauperum Refugium (mm. 46-69) contains its own durationally pertinent articulation at measure 61 (see Example 5), i.e. .66 of the section, whereupon the final cadential drive ensues.

(3) It should be remembered that Tu Pauperum Refugium is only the second part of the motet Magnus es tu, Domine, a one hundred ninety-four measure work.7 Speculating further then, observe that the secunda pars begins at measure 126, the two-thirds point (.65) of the complete motet.

Certainly we must acknowledge the sophistication of this design. But in so doing, let us not naively neglect the essential, nuclear components of construction. For the foundation of the structure is as architecturally solid as the macroformal edifice. Moreover, the examination of microformal aspects provide an opportunity to observe Josquin's control at a level unencumbered by the more complex and often amorphous matters of cantus firmus transformation, migration, developmental procedures, and macroformal assimilation.

The quoted excerpts of Tu Pauperum Refugium begin to suggest a possible compositional technique. Perhaps continuing investigations will provide increasing support for the idea of basic gestural control. It is evident from the examples presented here that Josquin exercises a remarkable structural refinement in both the large and small constructive modules of his music. And in the final analysis, it is this dual strength that permeates the music and may prove to be a prototype for Josquin's architectural logic.

2Manuscript sources for this motet are listed in A. Smijers, Werken van Josquin des Pres, Volume 1, Bundel III, pp. xiv-xv (Amsterdam, 1922). Once only "ascribed" to Josquin, the preponderance of source critical materials clearly indicates that the motet is Josquin's. There is, however, evidence to assign the prima and secunda pars to different periods of Josquin's compositional activity. As nearly as can be ascertained, both parts stem from the last quarter of the fifteenth century, certainly before the year spent in Ferrara (1503-4). For a detailed listing of the sources see Lowinsky, Ibid., pp. 267ff.

3For a recent discussion of some harmonic aspects, as well as textural functions, see Wallace Berry, Structural Functions in Music (Englewood Cliffs: Prentice-Hall, 1976), pp. 45ff and 236ff. Certainly the most exhaustive treatment of harmony, in Schenkerian terms and graphs, is found in Felix Salzer and Carl Schacter, Counterpoint and Composition (New York: McGraw-Hill, 1969), pp. 402-9.

4Unfortunately this crucial text underlay of the re-entering tenor has been omitted (surely a printer's oversight) in measure 36 of the excerpt as reprinted in Berry's Example 2-16, p. 239, (op. cit.).

5The employment of a i-iv harmonic axis in this final cadence, and equivalent to the opening five measures' intent, is almost a Josquin convention. For an even more extended example of a similar plagal close, see the concluding measures of the Agnus Dei, from the Missa Pange Lingua.

6Salzer and Schacter suggest ten divisions, i.e. five phrases in mm. 1-33, and five parallel phrases in mm. 34-69. This seems quite reasonable, although several of these divisions are still architecturally reducible.

7This tabulation is based upon the prima pars notation as printed in 19b of Smijers. The fact that some manuscripts suggest an alternate notation (see 19a) does not affect the aural result regarding architecture. See Gustave Reese, Music in the Renaissance (New York: W.W. Norton & Co., 1959), p. 258.