Rembrandt's Portrait of a Musician

The Corcoran Gallery's "Portrait of a Musician" by Rembrandt—signed and dated 1633—presents the iconographer with a maze of problems and a multitude of contradictory hypotheses. Although the Corcoran labels it a portrait of Heinrich Schütz by Rembrandt, there has been considerable controversy surrounding both the identity of the musician and the authenticity of the painting as a work of Rembrandt. 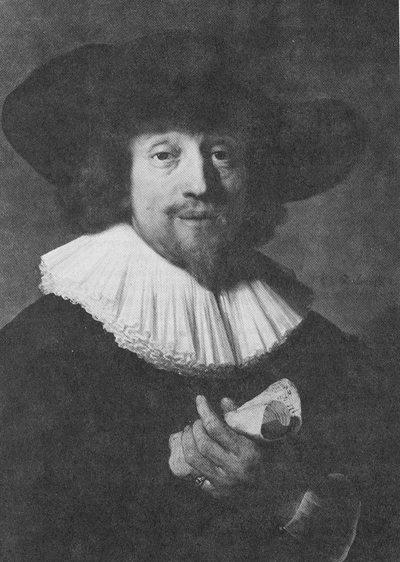 Rembrandt, Portrait of a Musician
(Courtesy, The W.A. Clark Collection of the Corcoran Gallery of Art)

At least one well-known Rembrandt scholar, H. Gerson, in his revised edition of A. Bredius's Rembrandt, doubts that the painting is by Rembrandt at all. "The attribution to Rembrandt," he states, "is not correct. The handling seems closer to Jacob Backer [Rembrandt's pupil in 1632]. Some details—the hands [sic] for instance—are rather poor."1 Another distinguished Rembrandt specialist, Julius Held, is convinced that "the hand with the music scroll was not painted by Rembrandt, but was added later."2 The authenticity of the painting as a whole has been generally accepted, however, especially when it is realized that Rembrandt often made later alterations in his pictures. The question of the model's hand and the scroll of music was confronted in the report made by the Corcoran Gallery after the painting was cleaned in 1955; it concluded that the hand was painted over the model's black cloak, but that the paint of the hand and scroll was "chemically identical with the paint of the face and so they must be virtually the same age; if not added by Rembrandt himself, therefore, they must be closely contemporary."3

In the dispute over the identity of the portrait subject, three claimants have been presented: Nicholas Lanier, Heinrich Schütz, and Constantijn Huygens. The identification of the sitter as Nicholas Lanier, the London musician, was made in 1936 by A. de Hevesy, who based his argument primarily on the comparison of the Rembrandt painting with a self-portrait of Lanier, now located at Oxford.4 The resemblance between the men depicted in the two paintings was slight, however, and the hypothesis received little acceptance.

Another, more widely accepted theory was advanced in 1937 by Bruno Maerker, who suggested that the subject of Rembrandt's portrait was the illustrious Heinrich Schütz.5 As proof Maerker compared the painting to one of the three known portraits of Schütz—that by Christoph Spetner in the Leipzig University Collection6—and postulated that the subjects of the two works bore striking similarity to one another. Maerker further attempted to substantiate his claim by suggesting that Heinrich Schütz visited Amsterdam during 1633, thereby placing him in proximity to Rembrandt. Further support was granted to this hypothesis in 1963 when Otto Benesch tried to link Schütz and Rembrandt through their dealings with Burckhardt Grossmann, the son of an acquaintance of Schütz.7 The Maerker-Benesch theory was readily accepted by many musicologists, most notably Hans Joachim Moser—Schütz's biographer, who confessed to his early skepticism, but later came to agree that the portrait could very likely depict Schütz8—and Wolfgang Rehm of the Heinrich Schütz Gesellschaft.

The identification of Rembrandt's musician as Heinrich Schütz is indeed intriguing, especially in light of the historical possibilities suggested by a meeting between two men of their stature. In his study of Rembrandt's "Christ Presented to the People," Emanuel Winternitz speculated that "it is, of course, tempting to ponder what the two great original interpreters of the Bible—one for the eye, the other for the ear—would have communicated to each other."9 The credibility of such a theory rests, however, on the question of whether or not Schütz visited Amsterdam during 1633. Although it is known that he was granted a leave of absence from his post in Dresden during this year and that he visited both Hamburg and Copenhagen, there is no evidence whatever that he took a side trip to Amsterdam. Any meeting between the two remains conjecture.

Whereas for Constantijn Huygens, the final candidate for the subject of Rembrandt's painting, there is much supporting evidence. Not only did he have ample opportunity to sit for a portrait by Rembrandt, but comparisons of the Corcoran portrait with authenticated representations of Huygens are most convincing.10 The identification of the musician as Huygens was made as early as 1942 by the art historian Edith Greindl,11 and has recently been given further credence in a superb study by Else Kai Sass, who discusses in careful detail all the literature and much of the evidence surrounding the Rembrandt portrait.12 Much of the information provided here is drawn from her article.

Constantijn Huygens (1596-1687)—the famous Dutch diplomat, man of letters, amateur musician, and poet—was clearly in a position to have been painted by Rembrandt. He was in close contact with the master over a number of years, including 1633, and was Rembrandt's intermediary for many of the works that he executed for Prince Frederick Henry of Orange. Through Huygens' diaries and correspondence it is evident that he spent a substantial portion of 1633 in The Hague, where Rembrandt may also have been while painting The Elevation of the Cross. Furthermore, Edith Greindl has pointed out that it was not so unusual for Huygens, a diplomat, to have been painted with a music scroll. He was very proud of his musical accomplishments, which included the composition of more than 800 melodies, the publication of his own collection of hymns, and the ability to play a number of different instruments.13 These talents had already been highlighted in a portrait painted in 1627 by Thomas de Keyser, where Huygens was depicted with several instruments on the desk nearby.

The final and most convincing evidence, however, rests in a comparison of the physical characteristics displayed in Rembrandt's portrait with those exhibited in the many known portraits of Huygens. Not only are the eyes of the same color, brown (whereas in the known portraits of Schütz, his eyes are blue-gray), but the lips, hair, and hat are all very similar. Moreover, the sitters in the Rembrandt portrait and the Paulus Pontius engraving of Huygens dated one year earlier both wear a ring on their little finger.

One may conclude that this fine painting at the Corcoran Gallery was undoubtedly executed by Rembrandt; it does not depict Heinrich Schütz, but rather Constantijn Huygens. In this portrait Rembrandt appears to have memorialized the musical accomplishments of the public official and amateur musician with whom he had dealt on so many occasions.

6The two other known portraits of Schütz include an engraving by Christian Romstet and a painting by an unknown German master of around 1670 housed in the Deutsche Staatsbibliothek in Berlin.

10Among the authenticated portraits of Huygens are included an engraving by Paulus Pontius after Van Dyck, which was executed in 1632; a grisaille by Jan Mauris Quinkhard, now in the Amsterdam Rijksmuseum; a painting by Jan Lievens, housed in the Rijksmuseum; and a painting by Thomas de Keyser from 1627 that is in the National Gallery in London.