What famous German interpreter of Beethoven omits a half-note from the opening of the Fifth Symphony? What gamba player of a noted English baroque ensemble perpetuates a publisher's mistake in Purcell's "Golden" Sonata, apparently not noticing that it is an incorrect version of the main thematic motive, continuing a chain of thematic imitation from the upper instruments? The analytic background for these and similar questions furnished ample material for the course topic "Style Analysis for Performers," an experimental course offered in the Department of Education, New York University, in the spring semester of 1978, with the cooperation and assistance of Dean Jerrold Ross and Dr. Roger Phelps, Director of Graduate Studies.

The first problem of such a course furnished a classic example of the chicken emerging from an egg it had just laid: to cram into one semester both a working knowledge of style analysis (two semesters are offered in the graduate curriculum in musicology at N.Y.U.) and at the same time to work out a special application from these very style-analytic techniques. Yet with the help of an exceptionally able and mature group of students—largely candidates for the Ph.D. in performance—the course seems to have won a place for itself, possibly because it raised so many questions, a useful if eccentric index of validity.

The performer will find at least three basic concepts from style analysis immediately useful as foundations for his own interpretation, particularly in new or unfamiliar repertories:

The course attempted to develop these basic approaches in two ways. First, each student supplied at least one tape of his own performance, which was placed on library reserve anonymously so that it could be studied in preparation for a general class critique. Second, segments of recordings by famous artists were juxtaposed in specially prepared cassettes, so that two or more performances could be compared. It came as a distinct surprise to some students that star performers often neglect or suppress essential features that a composer has clearly indicated. For example, at the beginning of Brahms' Rhapsody in E-flat, Op. 119 No. 4, many pianists overlook the implied hemiola in bars 3-5, despite the composer's accent marks.

As a general guide for the observation and criticism of performances, a special "performing version" of the New Cue Sheet for Style Analysis1 was developed (see Fig. 1). 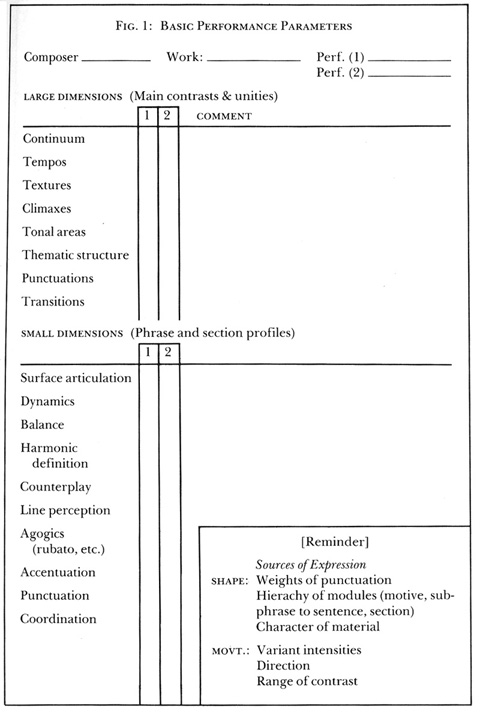 Then, by revolving individual assignments through this list of critical parameters, everyone was forced to examine all the various points in considerable detail and from several perspectives. As the semester progressed, sometimes with heated discussions, the class realized that differing performances could be described and understood as differing mixes of emphasis between the musical elements. Turning this reasoning back upon the critic, individual preferences for one performance over another often reflected personally conditioned responses toward particular elements. Singers, for example, showed great aptitude for criticizing the interpretation of melodic lines; pianists, on the other hand, immediately noted poor textural balance or lack of clarity in bringing out notes with strong harmonic tendencies. Using the gradually cumulated expertise in tracking the influence of the "SHMRG" parameters, the class finally attempted a particularly difficult problem: to discover some practical way to establish an appropriate range of tempos for a given piece. Again the SHMRG layers of musical elements provided a useful approach (see Fig. 2). 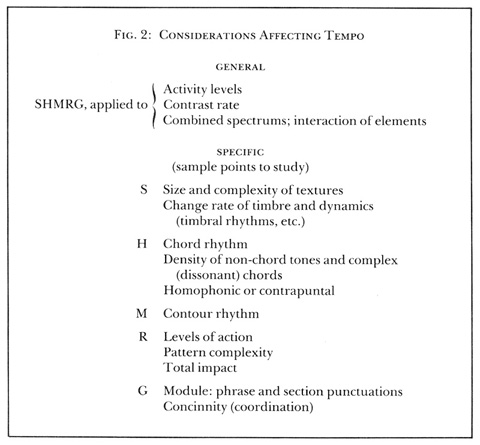 For example, our experiments demonstrated that a faster tempo could be achieved without an impression of haste by lessened emphasis on active elements; for example, if the harmonic activity was relatively high, the chording should then be played less emphatically. On the other hand, a slow tempo that seemed to sag at particular points in a movement could be strengthened by more expressive phrasing of interior lines. In this way, by adjustment of activity levels between different elements, tasteful performances of the same piece could be achieved in a surprising range of tempos. We all became intensely conscious of composers' differences in sources of activity, their personal preferences among the SHMRG elements. These observations led our performers to express the characteristic module of each work in a natural manner.

Positive reactions to this course, expressed not only immediately after its completion but also in the succeeding months (for example, in requests for comment on rehearsal tapes), seem to show the utility of style-analytic thinking for performers. As a result a similar course will be offered in the coming year in a slightly more historically oriented version, but open to students in both Graduate Schools of Arts and Science and of Education, under the title "The Structural Background for Performance Decisions in the Music of Haydn, Mozart, and Beethoven."