Authors of books and articles about musical instruments find their work made easier and more practicable by the inclusion of an illustration. Certainly the reader appreciates the precise detail contained in an image, particularly in the case of unfamiliar instruments. The illustration of an organ (Fig. 1)1 that comes from the Canterbury (Eadwine) Psalter (Cambridge, Trinity College, MS R.17.1), c. 1150 A.D.2 has appeared in a number of published works, often accompanied by citations and descriptions that are either comical, in honest error, or that are blatantly false. 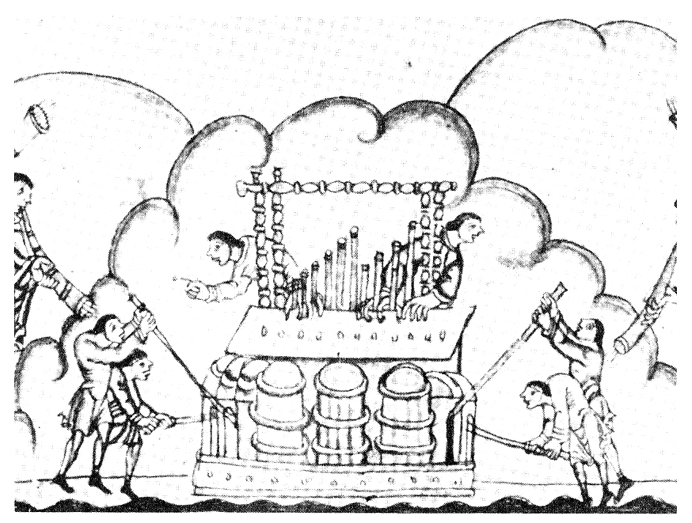 The image itself illustrates some of the hazards encountered in musical iconography, particularly when dealing with visual material dating from the Middle Ages, material which often provides the only clues to the musical practice of that period.

The picture in Fig. 1 shows two men apparently in the act of playing an organ while watching the four men who appear to be pumping with levers. One of the players seems to be admonishing the pumpers with his right hand in a gesture that adds a realistic touch of humanity. The instrument has two sets of pipes arranged in a single row, each set in graduated height and each controlled by one of the players. There are three barrel-like cisterns encircled by hoops in the front of the instrument and five pumps: two on the right and three on the left. On top of the wind chest (for want of a better word to describe the table-like top), and in front of the pipes, are eleven mysterious rectangular-ovoid shapes (buttons? keys? levers?) all roughly identical.

There is a type of framework rising in front of the players and extending above the pipes. In sum, there are enough details in the picture to indicate that an organ of some type is being represented, although the details are imprecise and puzzling in certain aspects.

This depiction of an organ, however, cannot be completely accepted as evidence of twelfth-century English organ construction, because it strongly resembles an earlier depiction contained in the Utrecht Psalter (Fig. 2),3 that was written between 816-34 A.D. in the diocese of Rheims, France.4 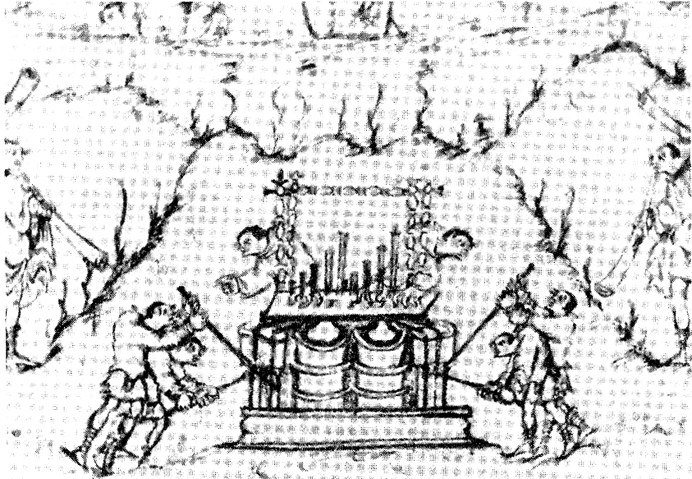 Although the relationship is apparent, the ninth-century Utrecht Psalter depiction of an organ varies in a number of details from the 12th-century Canterbury one.

In the earlier picture, there are the same two players and four pumpers in roughly the same positions, including the gesture of homely realism that seems to have traversed the centuries with ease. The instrument has two sets of pipes arranged in the same manner except that the player on the left has one fewer than in the Canterbury picture. In the front are only two cisterns, but each has a funnel on the top, and although indistinct, as though in a crude approximation of volume shading, there seems to be only four pumps, each having some connection from the top into the main body of the instrument. A great difference in this drawing is in the position of the players' hands, which are clearly touching certain keys or levers which correspond in position to the eleven mysterious shapes in the Canterbury drawing. A similar framework rises in front of the players, but it is more complete in its details at the top of the upright standards.

In the case of the Utrecht Psalter illustration, it can also be concluded that some details are imprecise and obviously unrealistic, but that there is a certain amount of truth in the depiction. But how much truth? And if true for ninth-century France, is it also true for twelfth-century England? The question is even more complicated by the results of research by various scholars, among them Kathleen Schlesinger, a musicologist, and the art historians Gertrude Benson and Dimitri Tselos, indicating that the Utrecht Psalter itself was in all probability copied from an earlier source.5 Some art historians, such as Tikkanen and Engelbregt, have held to the opinion that the Psalter was an original Carolingian creation.6 In the latter case there is a possibility that the instrument was copied from a real model,7 but in the former case the possibilities are more complex.

At this point, we have two pictures of organs, the later one an evident copy of the earlier, which itself may be a copy of a still earlier model. Both pictures have details that are either false or incomplete. Can either image give evidence about the Medieval use of organs or about Medieval organ construction? The answer is a qualified "yes," if certain facts can be determined: the date and origin of the original model, and the extent of the copyist's fidelity to that model.

The Canterbury artist has not been faithful to the "original"—which is the Utrecht Psalter8but the alterations themselves can serve as indirect evidence if: (1) the change has been a "modernization"—indicating both a change in musical practice and the artist's knowledge of it; or (2) the artist has made errors in copying—indicating his unfamiliarity with the original and the corollary that it may either have fallen into disuse or simply that it was not known by the artist.

The Canterbury drawing shows that the artist9 has misunderstood the Utrecht model, which is a depiction not of the pneumatic organ related to the modern one, but is instead a depiction of the ancient hydraulic organ10 and a double one at that. The Canterbury artist's unfamiliarity with hydraulic organ construction is seen in a number of alterations: instead of the functional cisterns surmounted with funnels which lead into a wind chest, he has drawn a group of three slightly differentiated cylinders (symbolic of the Holy Trinity?); and the rudimentary perspective of the Utrecht artist which rendered the tops of the four cylindrical pumps as ovals has been interpreted to be hemispheres. The Canterbury artist also seems ignorant about the manner in which the hydraulis is played, as the changes in the hand positions and instrument details show. Here too the Utrecht artist is at fault, although he has associated the position of the fingers with what look like keys. In both images, the framework is useless as drawn, but is more carefully executed in the Utrecht version. Other differences of detail in the numbers of pipes and their surface details, the positions of the pump handles, etc.—all indicate that the Canterbury version was not drawn by someone familiar with the actual instrument. The Utrecht version, although plausible in some details, indicates that the artist also was working from a picture or description and not from an actual instrument. This conclusion was reached also by Jean Perrot, whose examination of all the details led him to state: "Clearly whoever drew the scene was not working directly from a model, but simply relying on his own imagination, drawing on his own ideas and his reading. Indeed, this is even more likely to be a badly interpreted copy of an illustration from some older source."11

Although these two illustrations are details of larger pictures that are intended to illustrate the textual content of Psalm 150 and are drawn with specific reference to the Latin word "organi," neither picture can serve as direct evidence of Medieval organ construction. However, in the case of the Utrecht Psalter, there are possibilities and probabilities of musical interpretation that can be drawn from the pictorial content which have been concisely enumerated in a study by Tilman Seebass.12 Used in conjunction with research in other scholarly fields, the illustration from Psalm 150 and the hydraulic organ in particular can reveal some meaningful information to the field of music. The same cannot yet be said of the Canterbury illustration, yet that is the one that appears time and again in printed publications, as several examples will show:

1. Audsley, in his two-volume comprehensive study, The Art of Organ Building,13 correctly identifies the source of the picture, but describes it as a pneumatic organ. To compound the error, the modern artist who copied the picture misunderstood the image (thus unwittingly imitating his ancient predecessor) and has changed a few of the details so that Engel (quoted by Audsley) who apparently used the modern copy, has drawn false conclusions that are quite comical.

2. The same picture found in Audsley has been reproduced, but in reverse, in a descriptive chapter about musical instruments in the Middles Ages, where it is titled, "Great Organ, with Bellows and Double Key-Board, of the Twelfth Century."14

3. William Sumner identifies the picture, which is also incorrectly copied by the modern artist, as "The hydraulic organ of the Utrecht and Cambridge Psalters,"15 (italics mine) although his discussion and conclusions are informed and perceptive.

4. The picture appears in The World of Music as a "Drawing of an organ from the Utrecht Psalter, c. 890"16 with no explanation in the text.

5. The Concise Oxford Dictionary of Music identifies the picture as "A 10th-century organ. . . . The blowers do not appear to be giving perfect satisfaction to the duet players."17

6. A recent appearance is in the encyclopedia, Music Instruments of the World, where it is described as an "Illustration of a 6th-century hydraulic organ, based on that in the Utrecht Psalter. . . ."18

Other examples could be cited, extending the list far beyond this modest report. The point is that errors which have been disproved through scholarly research need not be continually perpetuated. It is the task of musical iconography to cumulate such research and make it accessible. It is an equal task to build a central source of pictorial images, the contents of which have been definitely ascertained. These pictures then can serve writers and scholars who need illustrative material and corroborative or comparative visual evidence.

4The dating is from a study made by Gertrude Benson and Dimitri Tselos. "New Light on the Origin of the MS Known as the Utrecht Psalter," Art Studies XIII (1931), 13-79. It has not been seriously contested.

5Gertrude Benson, pp. 13-53, argues for an original Latin archetype of the 4th-5th centuries, a copy of which, done in the 7th-8th centuries, served as a model for the 9th-century Utrecht Psalter. Dimitri Tselos, pp. 53-79, stresses the point that the model was indebted to the Alexandrian (Greek) tradition. This same point was stressed much earlier by Kathleen Schlesinger, The Instruments of the Modern Orchestra & Early Records of the Precursors of the Violin Family (London: William Reeves, 1910), 349, 368-69ff.

7Dimitri Tselos continues to refute this possibility in his article, "Defensive Addenda to the Problem of the Utrecht Psalter," Art Bulletin XLIX/4 (December 1967), 334-49.

8The reasons for believing that the Utrecht Psalter itself served as a model for the Canterbury Psalter are given by C.R. Dodwell in The Canterbury School of Illumination, 1066-1200 (Cambridge University Press, 1954), 1-3.

10It was correctly identified in the facsimile edition by M.R. James, f.261b, and noted by various scholars.

11Jean Perrot, The Organ. From its Invention in the Hellenistic Period to the end of the Thirteenth Century. Adapted from the French. Translated by Norma Deane (London: Oxford University Press, 1971), 278-79.

18Musical Instruments of the World: An Illustrated Encyclopedia by the Diagram Group (Paddington Press, Ltd, printed & bound in Holland, 1976), 82.