Applications of the GUIDO System to Aural Skills Research, 1975-80

In 1974 the University of Delaware began to develop a package of ear training programs called GUIDO (Graded Units for Interactive Dictation Operations). The two-year ear training curriculum has been organized into a competency-based format including intervals, melodies, chords, harmonies, and rhythms. Students spend an average of two hours each week at GUIDO learning stations, which consist of a PLATO terminal and a digital music synthesizer.

In the GUIDO drills, PLATO first displays an answer form, then plays a musical example, and finally asks questions about the student's perception of the example. PLATO also keeps track of student progress and issues weekly reports to instructors. Figure 1 shows a sample display from the intervals program.

Fig. 1. Sample display from GUIDO interval drill 1977 by the University of Delaware 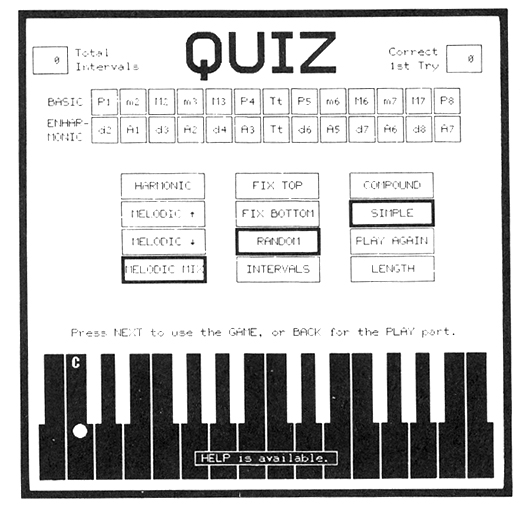 A lot happens behind the scenes in GUIDO of which students are not aware. Since students do not see the instruction received by other students, it would seem as if all of the programing were done just for them as individuals. Actually the programs are capable of being adjusted by instructors for use by students varying in abilities from young children through advanced collegiate music majors.1 A comprehensive overview of GUIDO is contained in Computers in Music Education.2

It is the purpose of this article to describe the ongoing research program and to summarize the results of experiments conducted so far. When the GUIDO project began it had not yet been determined how effective computer-based delivery was, compared to other forms of music instruction. The first experiment3 compared GUIDO to the traditional ear training tape laboratory. During the first semester 33 students received the same course in freshman ear training, with all drill done in the tape laboratory. At the beginning of the second semester the class was randomly split into two groups: 17 students were assigned to an experimental group which practiced ear training at the computer terminals, and 16 students were assigned to a control group which practiced in the tape laboratory. Results of a t-test at the end of the experiment indicated that the GUIDO group improved more than the control group (significant at the .05 level).

Based on results of that experiment the University of Delaware replaced its tape laboratory with a computer-based education laboratory, and for five years students have used the GUIDO system for ear training. Through the automatic data-saving features of GUIDO, all of the questions asked and answers given have been saved in a student data base. By analyzing this data, important information can be learned about the perception of intervals, melodies, chords, harmonies, and rhythms, and about how students acquire aural skills. Progress is being made toward a very important goal of computer-based education which was recognized by Allvin in 1971, "to define the optimal sequential ordering of materials within concept modules."4 So far this information has been of four types.

Three studies so far have studied cross tabulations of correct answers with student responses in order to determine confusion patterns in dictation exercises. Although it is beyond the scope of this article to present the results in the detail with which they are reported elsewhere, a summary is given here in order to provide an overview of what is being done. The first study dealt with harmonic dictation exercises.5 During 1975-76 student response data was saved for 17 freshman music majors as they worked through 15 units of harmonic dictation exercises on GUIDO. Analysis of the student data base led to the identification of seven confusion tendencies affecting the perception of harmonies: bass-line confusions, wrong inversion, confusions of chord function, wrong quality, unperceived sevenths, unperceived roots, and favorite response confusions. The level of student achievement on individual harmonies correlated highly with the percentage of times they were asked in the curriculum. Table 1 shows a summary of interaction of diatonic triads in major and minor keys. 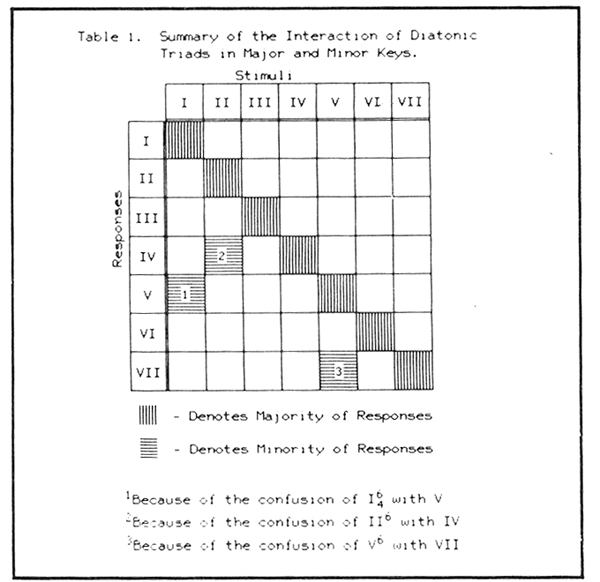 Across the top are the stimuli of diatonic triads from I through VII, and along the side are the student responses. In every case the majority of responses fall along the diagonal which indicates correct responses. For three stimuli there is a sufficient number of responses given for a triad off the diagonal to denote a minority response triad. For the tonic stimulus this minority response triad is V because of the confusion of I

The second study6 looked at the interaction of major, minor, augmented, and diminished chords in open and close position. Table 2 shows a summary of this interaction. 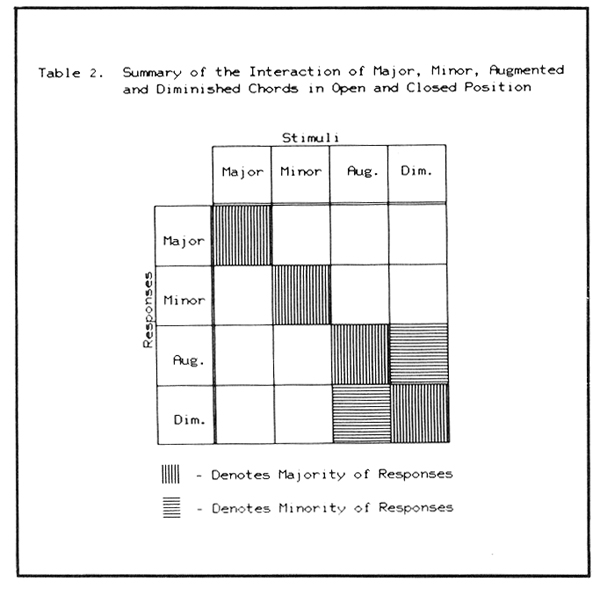 The third study dealt with confusion patterns in rhythmic dictation drills.7 Table 3 shows a summary of the interaction of basic notes, dotted notes, duplets, and triplets in simple and compound meters, where notes are called basic when they are quarter notes or regular divisions and subdivisions of quarter notes. 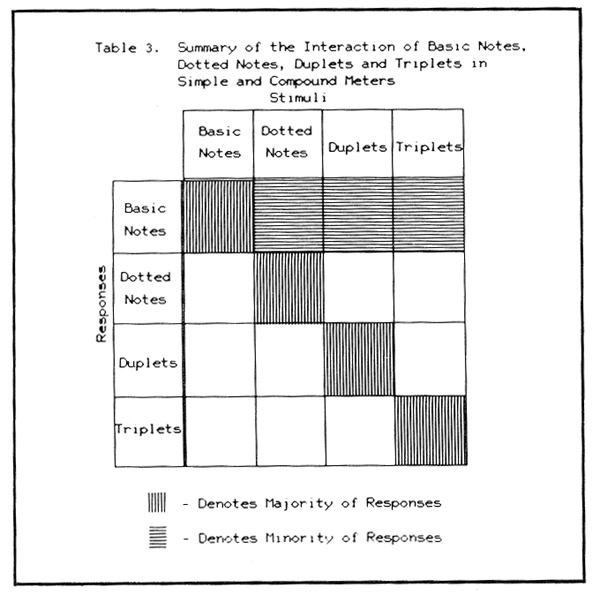 As a corollary to studying student response, data has been accumulated which dispels commonly held pedagogical beliefs. Although it is beyond the scope of this article to discuss all of these, an example is given for each of the areas of harmonies, chord qualities, and rhythms. It has generally been believed that bass-line confusion, inversion confusion, function confusion, and quality confusion occur for each of the seven diatonic triads. The harmony experiment showed that bass-line confusions actually affect only I, II, and III, inversion confusion occurs only for the primary triads, function confusion occurs only in I, II, III, and V, and confusions of chord quality occur only for I and IV.

For perceptual patterns in rhythmic dictation exercises, it was expected that the cross tabulations would show differences on the basis of compound and simple meters. The rhythm experiment showed that these expectations were false. The responses for simple and compound meters were so similar that they could be combined into one summary. In both meters basic notes are easiest, duplets and triplets are of medium difficulty, and dotted notes are the hardest.

Because of the absolute control which it provides over instructional variables, GUIDO can function as a laboratory setting for comparing alternate modes of instructional delivery. One new mode which is attracting attention is competency-based education. In the competency-based format, a student works at one level of instruction until mastery is achieved and is then branched ahead to more difficult materials. The mastery learning model thereby makes it possible for each student in a class to receive an individualized course of instruction. During 1977-78, 24 music majors participated in an evaluation of a competency-based approach to teaching aural interval identification.8 The students were taught ascending intervals using a traditional GUIDO sequence.9 While 12 continued to learn descending and harmonic intervals by the same methods in a control group, the other 12 learned in a competency-based experimental group. Although students in both groups spent the same amount of time learning, the experimental group improved significantly more on subsequent materials than did the control group.

This experiment also included an extensive analysis of student attitudes toward using GUIDO, and one important difference between the two groups was that the competency-based group was much more frustrated by having to meet competencies than was the control group. Concerned about the attitude of the students as much as their achievement, the author met with the student council of music majors and asked if the students would like to have the competencies either lowered or done away with entirely. It was the unanimous feeling of the council that the competency-based mastery learning model should be continued.

TYPE 4. EFFECTS OF DIFFICULTY UPON LEARNING STYLE AND OF THE USE OF STUDENT OPTIONS UPON ACHIEVEMENT

In addition to studying perception the rhythm experiment also attempted to measure the effects of difficulty upon learning style and of the use of student options upon achievement. By varying the time signatures it was found that significantly more exercises are correctly answered in simple meter when a four is on the bottom, and the same relation was found when an eight is on the bottom in compound meter. Randomly varying the pitch of the monotone stimulus had no effect on student achievement. As the level of difficulty increased in the twenty-four GUIDO rhythm units, so also did the average student response time and the number of times students asked for the stimulus to be repeated, while the average speed at which students played the stimulus decreased. However, neither speed of dictation, use of the metronome, nor number of repetitions had a significant effect on student achievement.

Whereas the research done so far has indicated that computer-based delivery of aural skills training is superior to traditional methods, the results of research on student responses which would be very difficult to save and analyze without computer-based techniques have opened the door to a new era of research in music education. Never before have music educators had at their disposal such a flexible tool for presenting stimuli, recording responses, controlling instructional variables, and analyzing student data, all as part of one automatic process. It is hoped that the research summarized in this article will be just the beginning of new knowledge generated through use of the GUIDO system. It is further hoped that by comparing the results obtained on other systems a collective model for aural skills learning behavior can be developed.

7Fred T. Hofstetter, "Computer-Based Recognition of Perceptual Patterns and Learning Styles in Rhythmic Dictation Exercises," Proceedings of the 1981 Conference of the Association for the Development of Computer-Based Instructional Systems, March 1981, Atlanta, Georgia.