One of the primary characteristics of disco music is its strong bass line. Many of the bass lines used in this genre have evolved from the bass lines of rock and boogie woogie music. This study will trace a basic disco bass line as it has evolved and developed from boogie woogie and rock music.

The predominant characteristic of boogie woogie, a pianistic genre, is the bass line, played in an "eight to the bar" rhythm. The "eight to the bar" rhythm translates into eight eighth notes per measure (in 4/4 time). One of the basic boogie woogie bass lines consists of a harmonic outline and an octave displacement of each note. In addition the harmonic movement is slow, usually one chord per two measures of music, although one chord per measure and one chord per four measures are also found.

The boogie woogie bass line consists of chord tones as well as added tones. The sixth (a major sixth above the root of the chord) and the dominant seventh (a minor seventh above the root of the chord) are the most frequently added tones. These added tones, characteristic of the harmonies used in the popular music of the period, helped to facilitate the contour of the bass line and of the movement from chord to chord.

The boogie woogie sound was also orchestrated and played by the "big bands" of the 1930s and 1940s.1 The basic chord tones were played on the beat and the octave displacement became an afterbeat. This alteration of the octave displacement was due to the lack of facility of the string bass or contrabass, used during this period, to carry the bass line. It would be difficult for the contrabass to duplicate, with ease, patterns similar to that in Example 1. In addition the dotted eighth and sixteenth rhythm of the period was used.2 The boogie woogie bass line became an integral part of popular music in the 1930s, 1940s and 1950s and it evolved along with the small, popular "rhythm and blues" bands of the period and with "rock and roll" in the late fifties.3

In the early rock recordings many bass lines consisted of chord tones, the added major sixth and the minor seventh. The boogie woogie-derived bass line continued to be used but without the octave displacement. The "eight to the bar" rhythmic pattern moved from the bass to the piano (right hand) and to the guitar and was played using repeated, stationary chords. In addition strong accents were given to the second and fourth beats of the measure. In response the bass line changed somewhat with rests inserted to accommodate the accents. Example 2 contains a condensation of the "eight to the bar" chords, the bass line and the rhythmic accents used in a number of early rock recordings. 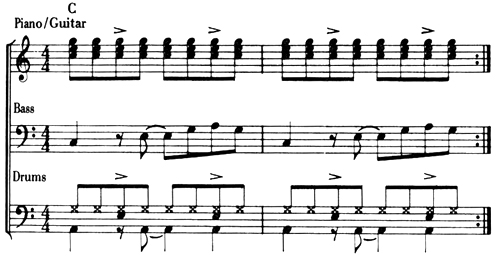 It should be noted that the boogie woogie bass line usually consisted of two-measure segments or patterns. This was due to the added sixth and seventh, as well as the need for an ascending and a descending measure. However, the rock bass line was contained primarily in one measure segments to facilitate the more frequent changes of harmony. The maturation of rock music (1964-69) produced a large variety of bass lines which were developed and expanded in many directions. One type of bass line can be found on a number of the Supremes' early recordings.5 The rhythm of this bass line (quarter notes) was carried through to the other rhythm instruments (drums, piano and guitar), establishing the importance of each beat of the measure. Although each beat of the measure was accented, the second and fourth beats still received the strongest accents. In addition it offered opportunities for the use of inverted chords. With the complete harmony played on each beat it was possible for inversions of these harmonies to be played. Example 4 illustrates this type of bass line with inverted chords.

During the ensuing years the introduction and wide use of the electric bass,6 with its easier technique, resulted in an increase in the complexity of the bass lines. The "four to the bar" Motown beat provided rhythmic stability to rock,7 freeing the electric bass to play the more complex lines without disrupting the basic beat. In addition many compound and polyphonic rhythms were introduced. The development of these rhythms initiated an evolution in rock from the basic eighth note with its variations, to the sixteenth note with its variations found in disco music.8

In October 1971 the Isaac Hayes recording of the "Theme from Shaft" appeared.9 The popularity of this recording, with its use of the sixteenth note as the basic rhythmic element, had a great impact on rock music. It contained a number of the characteristics of disco—the basic quarter note rhythm with superimposed sixteenth notes and an interesting bass line.

As disco music developed during the mid-seventies, the complex bass lines of the late sixties and early seventies became more stable in order to accommodate the sixteenth notes and the other polyphonic rhythms. Since the general harmonic movement of disco is slow (usually in two measure patterns), the natural direction for the bass line which would provide stability as well as movement was the octave displacement found in boogie woogie. So it would seem that we have come full circle.

As we have seen earlier, boogie woogie consists of octave displacement, chord tones, added tones and is usually played in two measure patterns (see Example 1). Disco is also usually played in two measure patterns, uses the octave displacement, has harmonic characteristics of inverted and suspended chords (in addition to root position chords), and because of the polyphonic rhythms in its superstructure, the bass line is usually stationary. Bass line movement occurs as harmony changes and on movement from one harmony to another. Examples 5 to 8 contain a typical disco bass line and the various ways it may be used with the same harmonic progression. 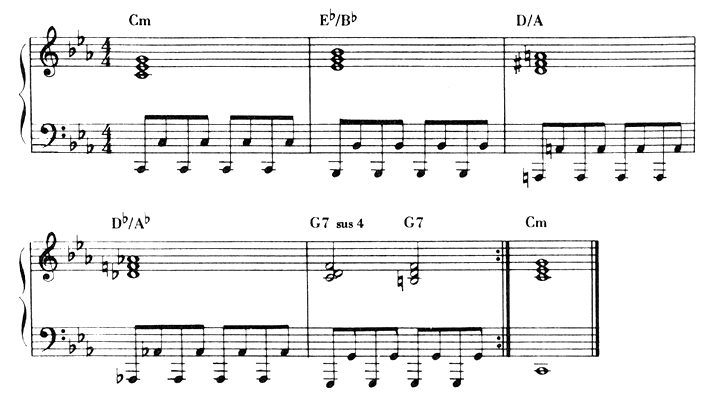 The bass lines and the musical examples in this study contain only the basic characteristics of the music discussed. It is naturally assumed that the examples do not represent the only bass lines or harmonic patterns found in boogie woogie, rock or disco. The purpose of this study has been to show how the bass line in popular music has evolved and developed through these various genres.

1Although boogie woogie was primarily a pianistic genre, it nevertheless was carried over to the big bands of the 1930s and 1940s. Count Basie recorded Basie Boogie and Red Bank Boogie. Tommy Dorsey had a big hit with Boogie Woogie, and Ray McKinley had Beat Me, Daddy, Eight to the Bar, among others. In addition a number of vocalists recorded boogie woogie songs. Ella Mae Morse had Cow Cow Boogie (with Freddie Slack's Orchestra) and the Andrews Sisters had Rhumboogie and Boogie Woogie Bugle Boy.

2The dotted eighth and sixteenth rhythm

, the dominant rhythm of this period, was also used in boogie woogie.

3The "rhythm and blues" combos of Lucky Millinder, Bull Moose Jackson, Buddy Johnson and Louis Jordan and His Tympany Five were some of the most popular.

4The electric bass guitar is an instrument one octave lower than the guitar.

6A guitar-like instrument with the four strings of the contrabass but played in the same position as the guitar.

7One of the predominant characteristics of the Motown group of recording companies of Detroit in the early and mid-sixties was the emphasis on the quarter note rather than on the eighth note.