Mentor to a Profession: A Tribute to Robert M. Trotter 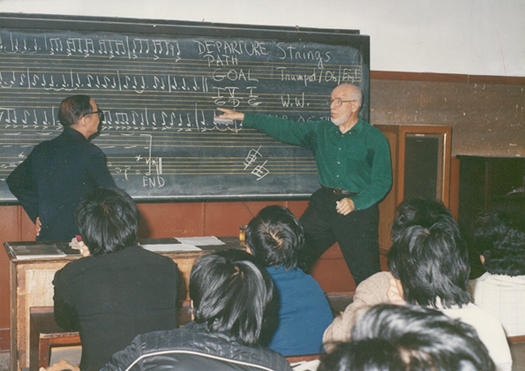 Robert M. Trotter teaching at the Shanghai Conservatory of Music, 1985

It is quite appropriate that this volume of the College Music Symposium be dedicated to Robert M. Trotter in recognition of a life that reflected his commitment to improving the art that he loved and the profession that he honored. This article provides an opportunity to acknowledge the significant role that he played in influencing individuals and organizations through whose work both the College Music Society and music in higher education generally have been considerably enriched.

Bob Trotter was traditionally trained as a pianist, oboist, and musicologist, but I believe he always saw himself primarily as a teacher who continually sought to refine his philosophy of life and music as the basis for more effective communication with his students and colleagues. As he wrote in his syllabus for a class of general university students, matching "your wants with my resources and my wants with your resources will be the basis for exchange during this course."

Bob Trotter was well aware of the evolutionary pace which he called "the glacial tempo" of change that is the hallmark of higher education, but he was also aware that education in the present is greatly shaped by individual and societal images of the future. He knew that if we do not apply our professional abilities to developing an accurate view of what the future could be, we will create a system that is less than useful for our students who will live in that future. He always sought to create a dialogue that would engage colleagues and students in better defining their needs and by so doing develop curricula responsive to those needs.

I would like to share what I saw as an evolving curricular philosophy constructed by Robert Trotter during one of our most creative periods in music in higher education. After becoming Dean of the School of Music at the University of Oregon his responsibilities became more nationally oriented through his presidency of CMS in the early sixties, his work with the Contemporary Music Project, and his Undergraduate Commission membership with the National Association of Schools of Music. All these experiences helped to focus his thinking on developing more appropriate means of communicating about music, both in general education and for the preparation of professional musicians who would be engaged during such a swiftly changing future.

Trotter constantly worked to bring more attention to music for the general university student. In a speech given at a general session of NASM in November, 1964, when he was the President of The College Music Society, he cautioned the membership that professional schools of music "do not have the right to abdicate responsibility to provide opportunities for musically educating students not interested in music as a career."1 He went on to develop within his remarks the concept that music instruction should take into account how music functions in developing capacities such as creating, performing, and listening. This was a concept that was to take on significance as it became part of an evolving approach to teaching that was to be known as "comprehensive musicianship."

Having started his career in a department that was primarily liberal arts oriented, Bob Trotter was well aware that teachers of general undergraduates could not assume that the aesthetic perception of musical facts depends on a technical vocabulary. He was also aware that the fundamental assumptions we make about music establish our teaching styles, so that if the teacher views music in its temporal design, controlled by the elements of music, he or she will develop a much different curriculum than if the music is perceived as a "creative gesture of the human spirit." Trotter took advantage of this presentation to suggest to the music administrators that the study of music should be more inclusive; not only art music, but also folk, popular, and world musics should be a part of the curriculum. He warned that "we can be too genteel and Parnassian in concentrating only on art music." Viewed from our perspective in the mid-1990s, these thoughts might not seem new, but viewed from the perspective of over thirty years ago, they are indeed far-sighted.

It was appropriate then that Robert Trotter was invited to be a member of a select seminar that met at Northwestern University in April, 1965, under the auspices of the Contemporary Music Project to develop a definition and suggested means of implementing "comprehensive musicianship." He served on a sub-committee charged to develop recommendations that would be applied to the area of history and literature and performance skills. Trotter was the reporter for the group, and his report certainly reflected his developing philosophy as well as that of his committee members.

It stressed the importance of the fact that concepts and skills are fulfilled only when they move towards the higher goal of aesthetic experience. The proposals of Trotter and his colleagues during these discussions are still important benchmarks for curricular considerations. They suggest that "at all times the teacher should keep in mind the following principals:

(1) All music courses are inter-related.

(2) History must be preceded by aural experience, through carefully guided listening and/or performance.

(3) History must be supplemented by analysis.

(4) The aim of instruction is not only to present answers, but also to encourage continuing interest and investigation on the part of the student, by indicating the extensive range of each subject."2

Trotter was personally convinced that in-depth musicianship studies should serve all music degree students and provide a basis for interaction between musicians of varying specializations.

In 1966, he presented these ideas to an international audience at a conference of the International Society for Music Education at Interlochen, Michigan. There he cautioned his audience from around the world that the traditional distinctions between the missions of conservatories and universities have been blurred. By eliminating the distinction between "training" and "education" a system might be defined which could specify the goals of music instruction from kindergarten through graduate training. It was in this presentation that he set out his objectives for all students of music in "that they develop their capacity for experiencing the beauty in music and for reflecting on the experience as an enhancement of life."3

Robert Trotter would continue throughout his career as teacher and administrator to develop within each student a relationship between both a love for and an understanding of music. It was his belief that this in no way compromised the standards of music education, but he cautioned that one should not use this more comprehensive view of music training as an excuse for less than the most rigorous standards. As he said "by all means let us distinguish between trying to make all students equal and trying to give each of them an equal opportunity to develop according to his/[her] individual gifts and motivation."4

This more comprehensive approach to musical education became a central theme of all that had been developing in Robert Trotter's thinking and teaching. It was to be applied in his own school of music through his colleagues, who developed coordinated curricula that would stress these musical skills of creativity, performance, and analysis. It also became an important part of his growing appreciation of the wide spectrum of world music.

In a 1968 presentation at the MENC National Meeting in Seattle, he articulated his position clearly by stating that "the appropriate repertoire for future teachers is primarily from the twentieth century, preferably presented in pairs of compositions, one from this century, one from an earlier era . . . historical insight comes rather late in a student's life; it comes about when past and present are compared and when a piece of music from the past is compared with similar pieces from the same era. Further, the appropriate repertoire for future teachers also includes large amounts of music from ethnic groups all over the world, including our own suburban and inter-city tribal groups. The vitality of this repertoire is no excuse for us to ignore it or fight it, that very vitality makes it an ideal vehicle for us to practice the kind of self-renewal we are called to."5

It is important to place this speech in the context of the evolving counter-culture revolution that was taking place within society, and particularly within higher education. Trotter was certainly influenced by this. He tried to understand it and to understand the cultural re-orientations that had been taking place during this time. He also constantly reminded all that he came in contact with that the criteria for choosing repertoire for studies in performing and listening depended on the image of music that was held by the teacher and a hierarchy contained within his or her musical understanding. He also reminded us that we should be involved with folk music, contemporary popular music, and world musics, in spite of the college music teacher's fear of these unknown repertoires. This was part of a constant theme that he used to mentor so many to help dispel "ignorance and incompetence and such adverse attitudes as fear and anger," recognizing full well that these were attitudes that he had struggled constantly to set aside so that he could move forward in his teaching.

When one views the extended evolution of Robert Trotter's thoughts and commitment to music, we recognize the influence he had on many who shaped what the College Music Society has become today. Through both his personal commitment and his constant mentoring of friends and colleagues, his evolving philosophy of what music in higher education could become continues to be refined and realized more each year.

Today, I, for one, better appreciate his gentle yet firm mentoring. It is now up to us to commit ourselves to carrying on that tradition of teaching by example and informed dialogue. It is a responsibility that is nurtured today by the extensive activities of The College Music Society. There were and probably are those who are uneasy with the philosophy and its implementation that was so well expressed in the life of Robert Trotter. He fully honored these differences, and indeed, throughout his career, sought out reasoned debate on these approaches to music education at all levels. Thus his whole concept of tradition and change was so much a part of his mentoring that he constantly saw them as inseparable parts of an ongoing process in which all are participants.

Change continues on all sides, driven by technology and ideas that create a constantly shrinking world. Thus, we look to traditions for the stability to adapt to change without losing values. The strength of our profession depends upon the individuals who are prepared to fulfill their obligations to their students and their art. As Robert Trotter so often pointed out, our continuing search for a more comprehensive musical education provides a true ostinato for our professional growth as we continually prepare ourselves to be secure with change and excited by the future.

1Speech on "General Education in Music" November, 1964, National Association of Schools of Music.

2Comprehensive Musicianship, A Report of the Seminar sponsored by the Contemporary Music Project and Northwestern University, April 1965; Recommendation of Group III, 19.

Robert J. Werner is Dean Emeritus of the College-Conservatory of Music, University of Cincinnati, having served as Dean of the institution from 1985 to 2000.  He served as Director of the School of Music of the University of Arizona 1973-1985, Director of the Contemporary Music Project from 1968 to 1973, and as Associate Professor of Music at SUNY-Binghamton from 1966 to 1969.  He has served as President of the International Society for Music Education (1984-1986), the National Association of Schools of Music (1989-1991), and The College Music Society (1977-1978).  He is author of numerous textbooks, scholarly publications, and articles; has served as a conductor, clinician, and speaker at numerous state, national, and international conferences; and has served as a consultant and accreditation reviewer for over 100 institutions in the United States and internationally.