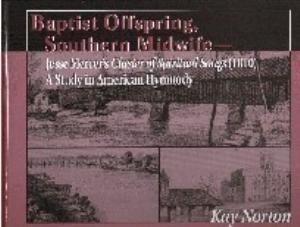 Baptist Offspring, Southern Midwife—Jesse Mercer's "Cluster of Spiritual Songs" (1810) exhibits the fruits of a thorough and heart-felt investigative study of an active and influential man, a variety of historically revealing hymn texts, a repertory (which turns out to have considerable significance), and the diverse and evolving culture in which they existed. The subtitle of the book, "A Study in American Hymnody" is apt—and perhaps an understatement considering the wealth of information contained therein. Kay Norton has divided her study into three large "parts," each comprising multiple chapters (unfortunately both are numbered with Arabic numerals causing minor visual confusion when part 2 begins with chapter 3, for example). Part 1 provides the contextual setting, taking the reader beyond the heretofore typical New England focus, and illuminating the "people, places, events, and times that inspired Mercer." (xix) Part 2 contains a biography of Jesse Mercer and a description of the texts of The Cluster. As noted in the title, the 1810 third edition of the collection was Norton's primary resource, and this date places it early in the history of hymnody in America. Southern shape-note hymnody, folk hymnody, songsters, and camp meetings all were in their nascent stage in the early nineteenth century. Part 2 also contains considerable information on Georgia and America and on men and women interacting in religious, political, and social settings during the exhilarating but flawed American society of Jesse Mercer's life. In Part 3, Norton painstakingly analyzes the text sources of Mercer's collection and offers solid conjecture regarding the tunes his congregants likely used.

The "Baptist Genealogy" of chapter 1 provides a concise overview of the convoluted theological history of the Baptist denomination, its relationship to contemporaneous sects, and its mid-seventeenth century establishment in the American colonies. Norton also relays the equally important history of the use of music and congregational singing within the growing Baptist ranks. Music certainly played an important role in the eighteenth-century Revivalism that was spreading in the United States, and while hymns and tunes of Watts, Wesley, the Moravians, and other English and European sources were common, "it was left to the Separate Baptists to supply a hymn repertory that utilized the culturally rich folk music of the colonies." (7)

The so-called "Great Awakenings" (of both the 1740s and the 1780s) and the growth of the Baptist Church are inextricably linked to the history of Georgia, the subject of chapter 2. As the southernmost colony, Georgia's colonial and early statehood history is quite unlike those of other colonies and early states, a situation resulting in part from its differing climate, economics, educational resources, and political and military leanings. Here the Church of England, so influential in the north, was overshadowed by the evangelical movement, and Georgia's cultural and social life was noticeably limited in comparison to the north.

The Jesse Mercer introduced in chapters 3 through 6 is an interesting character whose career as an itinerant preacher after 1789 was difficult. His life provides a window on the social, religious, and political issues of his day, and after introducing him in his historical context, Norton writes: "By today's standards, Mercer would be branded a male chauvinist and bigot, but in his day he was considered among the godliest of men." (24) She goes on to describe how he used the print media of his day to make his mark nationally among Baptists and his connections to and thoughts about important issues of his day such as slavery (which he regarded as a "civil" rather than "ecclesiastical" concern) and preservation of the Union. Mercer's Cluster is shown to have a number of musical "intersections" with the well-known collection of hymns for use by African Americans compiled by Richard Allen in 1801. (44) As a late-eighteenth/early-nineteenth-century man, Mercer's attitude toward and interaction with women and Native Americans is somewhat thorny, and Norton tackles both topics as they relate to religious life and to music of the time. Her conclusions might be summarized as follows: In his day, Mercer was considered "a virtuous man among his peers," but he misses the mark as a human-rights advocate by today's standards. (72) It is into this environment that "one of America's most popular sacred musical traditions" would be born. (47)

The title of Norton's book is explicated in chapter 7. Early Baptists were not tied to or led by a centralized authority, so "Baptists could and did sing whatever they pleased." (75). Mercer's collection of 199 texts, therefore, contained a wide variety of texts that would appeal even to the marginalized of society. The Cluster was able to serve both as a practical hymnal in Mercer's own time for his fellow Baptists (an "Offspring of Baptist Evangelicalism") and as an inspiration or textual source for the future (a "Midwife to Southern Hymnody"). Norton goes on to indicate how Mercer's collection shows strong influence on other, later, more famous collections such as The Southern Harmony of 1835 and, possibly, Slave Songs of the United States (1867). She also begins the difficult but important process of piecing together clues about the tune repertory likely used with the Mercer text compilation.

Part 3 and the remaining chapters of Baptist Offspring, Southern Midwife focus on analyses of Mercer's texts and the tunes believed to be associated with them (he only began to suggest a few appropriate tune names in the 1823 edition). Although the Cluster contained no printed music and no suggestions of appropriate melodies or harmonies, Norton argues that it "is a musical document. . . . [and] relating the musical history that is embedded in the pages . . . requires a form other than the 'modern edition'—the uncontroversial, objective product of standard musicology." (xix) She approaches the study by considering an eclectic array of tune sources and specific tunes that would have been "valid denominationally, historically, regionally, and musically." (xx) Norton points out that "previous scholarship maintains that Northern singing school masters . . . brought the taste for folk tunes and shape notes to the South," but that Mercer's 1810 collection provided much of the groundwork for this since Georgians were already "singing folky texts by rural preachers . . . prior to the publications of Wyeth [Repository] and Ananias Davisson [Kentucky Harmony]." (xxi) The projected hymn repertory related to Mercer's collection provides here-to-fore unknown insight into the "pre-shape-note music" of the south. (170) The issue of performance practice is another major topic of the final part of the book. For example, Norton suggests that both lining out and beginning-to-end singing traditions were employed.

Harmonie Park Press should be congratulated for bringing this important and interesting story and historical resource to our wider attention and for the quality evident in the production of the book. The writing is both scholarly and friendly, detailed and story-like. Norton has succeeded in presenting a convincing argument as to the importance of Mercer's collection. As a reader, I particularly appreciate the use of footnotes (as opposed to endnotes), and while the oblong shape causes the book to be somewhat cumbersome to hold aloft for any length of time, the shape is practical for the content and historically apropos. The numerous maps, illustrations, tables, and musical examples are printed and, for the most part, arranged clearly as well. Baptist Offspring, Southern Midwife concludes with a lengthy bibliography (which includes subheadings for Hymnals and Musical Sources and Internet Sites), a First-Line Index of 1810 Cluster Hymns, an Index of Hymn Tunes Cited in Text or Tables, and a detailed General Index. The author and publisher obviously wanted the book to be both meaningful and user friendly, and they have accomplished both goals.

Linda Pohly is Coordinator of Graduate Programs in Music and Professor of Music History at Ball State University. She is a long-time member of CMS having served on the national program committee and the Music in General Studies committee. She also has participated in Community Engagement activities associated with national conferences. Linda teaches Introduction to Music for non-majors, Music-appreciation pedagogy, Bibliography and Research, Music of the 20th century, and American Music among other courses. Her research interests focus primarily on American music of the late 19th and 20th centuries.