Improvisation in an Undergraduate New Music Ensemble: A Practical Guide

Exposure to contemporary sounds, contemporary musical literature, and improvisation has been a part of the undergraduate music curriculum for several decades. However, such exposure is often in the form of listening with very minimal actual improvisation, and is usually limited to tonal music. One place that undergraduates could actually perform and improvise in contemporary idioms could be an undergraduate New Music Ensemble. Unlike some new music ensembles, especially those made up of graduate performance majors and usually performing the masterpieces of the twentieth century, such as Schoenberg’s Pierrot Lunaire or Crumb’s Vox Balanae, an ensemble geared towards improvisation could more adequately meet undergraduate needs. An undergraduate New Music Ensemble, at a small institution that caters mostly to music education majors, can be the place for students to learn and perform contemporary sounds and techniques through improvisation and various types of indeterminate and minimalist scores.

Improvisation is not just “playing anything you want.” Improvisation, including jazz improvisation, is based upon a given structure. The structure can be melodic/harmonic/formal; can use traditional notation, or it can be verbal or visual. The performer chooses from various musical parameters, such as pitch, rhythm, harmony, and texture. Then, the improvisation must be practiced and refined. Within any style, the performer builds up a repertoire of musical gestures and sounds. The New Music Ensemble at the University of Nebraska at Kearney (UNK) is led through a series of exercises designed to give the students confidence in “making something up” and exploring post-tonal sounds and extended techniques. A brief musical gesture is used to initially introduce the students to improvisation. The students practice inventing short musical ideas, and when they feel comfortable with this, one student will introduce a gesture, and the others will imitate it, initially like a game of follow the leader. However, the students must be reminded that the exercise is not an Ear-Training test, even though it is an exercise in listening. They are not to simply play back what they hear, as literal imitation would not be ‘improvising.’ They are to follow the rhythm, shape or contour of the musical gesture and expand upon it.

Students are introduced to five concepts: Unity, Variety, Continuity, Role, and Space. As their listening skills develop, students are encouraged to improvise a response to the initial gesture that will contribute either Unity or Variety. Aspects of Unity in their response to the gesture could include imitating the contour and rhythm only, the contour only, or the rhythm only. They may embellish the original gesture, lengthen it or shorten it. Aspects of Variety include introducing a new musical gesture, new pitches, intervals, contour and/or rhythm, introducing a new musical gesture that complements or answers the first, contrasting the musical gesture in texture, including articulation and phrasing, and contrasting the musical gesture in density.

The New Music Ensemble often uses this type of improvisational piece as a warm-up. It begins with each player entering one at a time, imitating the original musical gesture. As each enters, the previous player continues to improvise. Once the players all have entered, the ensemble is improvising as a group, and the concepts of Continuity, Space, and Role are explored.

Continuity refers to keeping the musical idea going, bearing in mind that perceived musical time in performance is different from actual clock time. The students consider what factors can contribute to increased or decreased tension or intensity. Intensity levels can be affected by increase or decrease in dynamics, register, texture and density, and by increase in dissonance. Along with the concept of continuity, students explore how to shape a musical piece. The ensemble works with two basic shapes: (1) a well-defined “classical” shape, which includes introduction, increase in tension, apex and denouement, and (2) an intentional lack to a well-defined shape, our “Moment of Zen.”

As members of the ensemble develop confidence in improvising, they are introduced to the concept of Role. In addition to having the Role of playing the principal linear gesture or sonority, they can assume a secondary role, adding counterpoint or contrasting melodic material. They can also assume an accompanimental role, creating a texture or rhythm that supports and complements an original musical gesture. The concept of musical Space has to do with the range and register of a musical gesture or texture. Students are encouraged to use the entire range of their instruments. Musical space also involves density of texture and use of silence. Students become sensitive to musical Space as they listen carefully to the musical ideas being presented. The first lesson to learn is to not play constantly. Separating musical ideas with silence helps to avoid chaos. Players must listen and contribute when they feel the need, so as not to clutter up the musical texture.

These five concepts are used to improvise on various types of structures, scores, and stimuli. While the group continues to warm up on musical gesture improvisation, the students are gradually introduced to improvising from various types of musical scores or improvisational charts. These scores are chosen to move from scores which have many musical factors given, to those that have few or no musical factors given, resulting in more indeterminacy.

The ensemble explores pieces such as Terry Riley’s In C1 or Frederick Rzewski’s Les Moutons de Panurge,2 which is scored for any number of musicians playing melody instruments and any number of others “playing anything.” A New Music Ensemble should have a large cache of small percussion instruments such as bells, whistles, wood blocks, finger cymbals, shakers, etc. While all the pitches and rhythms are given in these pieces, the resulting sounds and textures are somewhat unpredictable.

In the piece In the Aeolian Mode by James Tenney,3 players use only the pitches of the A Aeolian mode and improvise continuous melodic lines. Instructions are given verbally, and while suggested instrumentation is for prepared piano, marimba, vibraphone, flute and alto voice, other similarly gentle instrumental timbres may be added. This piece also makes a good warm-up for the ensemble. Students are also invited to create their own one-page score modeled after this piece. Variations can be created, for example, using a different mode, an exotic or synthetic scale.

Madrigal by Darleen Mitchell (see example) is written for three or more voices or instruments. Players randomly choose pitches, but must follow the shape of the melodic line and the leader or conductor who cues each sonority. This is a good exercise for the students to become accustomed to unusual sonorities.

Improvising from non-musical notation will produce the greatest degree of indeterminacy, as all pitches, rhythms, textures, etc., are indeterminate, unspecified and unpredictable. The first type of totally indeterminate structure for improvisation that the New Music Ensemble uses is verbal stimuli. A single phrase or line of a poem can provide the character of an improvisation. The students may work from an initial melodic gesture and/or textures while being cognizant of Continuity and Role. Students should suggest texts. Some of the texts that the UNK New Music Ensemble has used are “Spread in the stillness your mind” (Stefan Georg), “The eternal silence of infinite space inebriates me” (Blaise Pascal), or “This is the side of the moon that no one sees” (Kathleen Norris). Before beginning the improvisation, the group should discuss the meanings of the text and what character the music might have.

An entire poem or prose text can be read while the other members of the ensemble react to the text. The reading of the text can also be dramatic, with a heightened sense of emotional intensity or an intoned, musical delivery. Movement can also be used. One text that has been successful is Federico Garcia Lorca’s entire poem Why was I born surrounded by mirrors? which George Crumb set in his Madrigals. Other than the structure and character provided by the text, the sounds will all be indeterminate. However, as a group, certain textures or even melodic gestures can be developed and used. 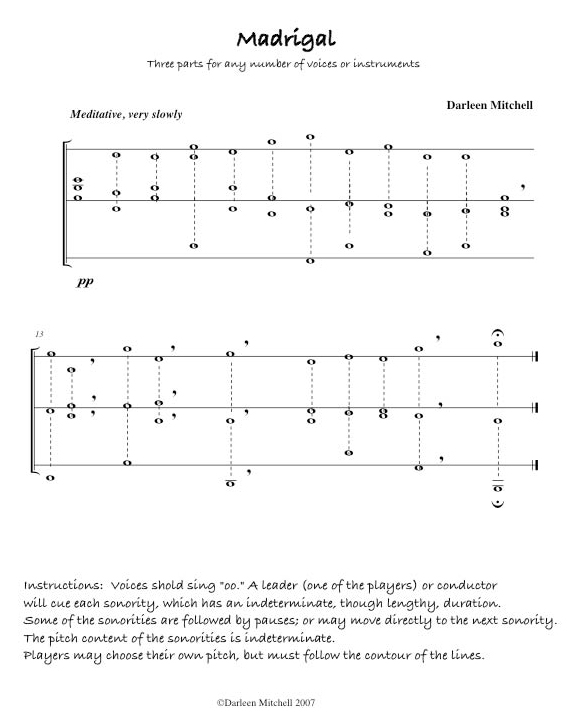 5. Use of Extended Techniques

As the students are developing their improvisational skills, pieces that use extended techniques, such as Donald Erb’s Music for Mother Bear for solo flute,4 can be introduced. Some works involving extended techniques do not have to be prepared totally for performance. Rather, they should be studied for the notation and extended techniques involved, and then these techniques can be applied to an improvisational piece. One year, the UNK ensemble included a flutist and cellist, so George Crumb’s Voice of the Whale was studied. Excerpts from this work were performed on a student recital.

6. Use of Graphic Scores

Scores which are mainly graphic or visual can also be used as stimuli for improvisation, like the poetic image or as an actual map to follow. Transmission by Darleen Mitchell (see example), can function this way.

The score, produced as a rubbing from an actual automobile transmission, contains no verbal instructions, but can be a stimulus to improvisation visually and poetically. As the drawing is not meant to be a map to follow, he ensemble should discuss how they want to approach the work. In the work Time by Takayuki Muto the score is mainly a visual map that each player follows, although there are verbal instructions. For these pieces, and other pieces of this type, the resultant sounds will be totally indeterminate.

7. Use of Found Objects

Found objects should be included from the beginning. Students are encouraged not only to play objects in the room, such as the music stands, chairs, walls, etc., with percussion mallets, but also to bring objects from home. Plastic and glass bottles and jars, empty or filled with beans or pebbles can be played with mallets or shook. Any objects of metal, plastic, glass, and even paper, can make sounds. Some delicate sounds, such as slowing tearing paper, may have to be amplified in performance. Some pieces scored for found objects exist, such as t,h;r:u;s,h;e:s – poems part 1 by Kristian Twombly. It helps if the ensemble director has a cache of mallets and objects to start with.

An undergraduate New Music Ensemble should be fun, with an air of creativity and exploration. Students should be encouraged to create their own improvisational structures. These student pieces can be rehearsed, discussed and refined, as students learn what type of information is needed in a score to achieve the desired result. The ultimate goal is to acquaint the students with contemporary sounds and processes so that they can take these ideas into their own teaching and performing. 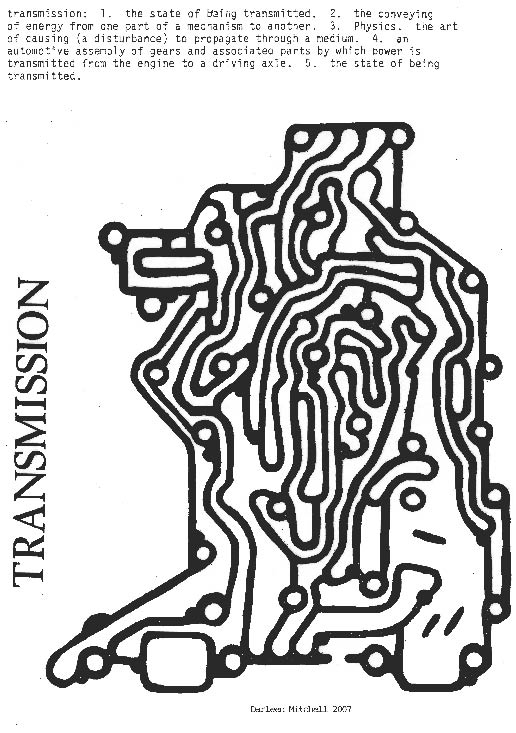 2Johnson, Scores, 177. This and many other indeterminate/improvisational scores can be found in this anthology.

Darleen Mitchell has written over 120 compositions for various instrumental and vocal combinations, from solo flute to full orchestra and chorus. Her compositions have been performed throughout the United States and in Europe, including at regional and national College Music Society Conferences and the New Music Festival of the American Composers Alliance in New York. Her works are published by American Composers Editions in New York.

She received a Ph.D. in Music Composition from the University of Chicago where her teachers included Ralph Shapey and Pulitzer Prize winner Shulamit Ran. Dr. Mitchell founded and performed with the improvisational ensemble The Marcel Duchamp Memorial Players in the Chicago area for over 10 years. She is currently a Professor of Music at the University of Nebraska at Kearney where she coordinates the music theory and composition programs, directs the New Music Ensemble and the annual New Music Festival.