The American songbook repertoire of our musical past—the 1930s through the 1950s—is not where one usually seeks abstruse metric and rhythmic details. The very nature of that repertoire— and especially its demands on performers—deems complications undesirable. A song in 4/4 bears accents on beats one and three; divisions of those beats normally do nothing to contradict a 1-2-3-4 makeup. Syncopations are merely diversions from the norm—the norm lingering in the background. For those who doubt this claim, I suggest a careful examination of collections of such songs, like those in the old “Fake Book” of the 1940s, where hundreds of such songs can be found in their original notations.

For this reason, I was shocked to find an oddity that contradicts the norm. It’s a classic example of polymetric successions, no less complex—in its own special way—than what one might find in classic phrases by Bartók or Piston. That rare veering from the norm occurs in “But Not for Me,” a song from the classic Gershwin show Girl Crazy of 1930. Gershwin’s notation is in simple Alla-breve meter, yet a careful examination of the tune’s sonic and lexical realities yields striking exceptions to the specified norm. Within that conventional Alla-breve housing resides a succession of groupings that can only be described as threes and twos, defying the metric balance of 2/2 plus 2/2. A metric scansion of the text for the first verse of Gershwin’s song need not be complex, as shown below (accents are in bold letters).

And, of course, this ordering might be set to music in many different ways. The choice of any one must fit rhythmic outcomes to pitch desires; any final result depends upon the message the composer wishes to transmit. It might be harbored in a melody of far more complex structure than its lexical structure implies, as it is spoken in the English language.

I have included enough of the tune here to undergird my claim of mixed meters. Those who find that claim questionable should sing through the song to enjoy its rhythmic treats. Perhaps my reader will even be seduced into joining my search for yet more examples of such eccentric delights.

The Gershwin piano arrangement, made in 1930, only broadens the sense of eccentricity. Most interesting is the way it sometimes strengthens the polymetric version. At other times, it does not. 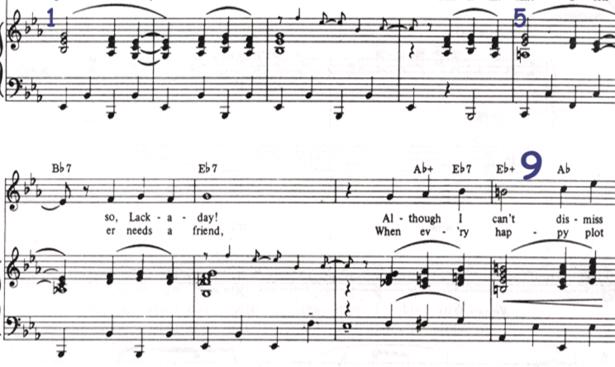 As the piano arrangement makes clear, chord changes sometimes underline melodic blockings, and at other times contradict them. In its first three measures the I–V-I-V-I progression supports the melody’s 3-3-2 scansion. The I-V-I that moves from ms. 2, then concludes in ms. 3, undergirds the melody’s switch back to the duple meter that continues into ms. 4. But ms. 5, with its V/V, followed by V7 in ms. 6, does nothing to strengthen the melody’s polymetric scansion. Finally, the harmonies of ms. 9, with its 2/dissonance + 2/consonance fails to confirm the lexical rhythm of strong-weak-strong (“can’t dis-miss”) as well as the 3/4 meter implied by the polymetric scheme.

Put together, these items are likely reasons this song continues to be more fetching than many others of the same vintage. This presence of improbable rhythmic conditions, in what one expects to be simple and straightforward scansions, provides but another surprise in the analytical hat. As Lawyer Frazier said to Bess about “deevoce” without marriage, “It’s a complication.”

I may have misinterpreted some of these passages. The interactions of melody, harmony and text are indeed complex. But I am convinced that the presence of metric shifts is supported by sonic reality, even if some of my interpretations seem to be a bit left of center.

There are yet other examples in the American songbook repertoire. Songs like “America,” from Bernstein’s West Side Story are rooted in rhythmic patterns of a recurring polymetric scheme, a 6/8—3/4 pattern introduced even in the song’s introduction. One might call it “recurring syncopation,” but the designation polymetric fits as well.

I have no doubt that there are many other examples of such metric irregularities in the American songbook repertoire of the past eight decades. Music theorists have ignored them over the years, mainly because other factors—most of them dealing with pitch—have captivated our theoretical interest. True, the polymetric occurrences are not numerous. Despite long and careful searches of the repertory, I have found few whose characteristics quite match those of “But Not For Me”. Two that I do find eligible are classics of the faded pop genre: “Good Night Sweetheart” and “I Can Dream, Can’t I?”. Both are shown next, brackets displaying their metric irregularities.

One captivating aspect of this first sample is its usual following of a three grouping by one that is unclear, as in the line “may make us for-lorn.” The three groupings are nonetheless not hidden, although they are less obvious than those from the beginning of “I Can Dream, Can’t I?”.

Perhaps these little gems will spur my readers on to discover other such mixes of meter where a constancy of simplicity is assumed to dwell. Best wishes!

After a youth playing jazz trumpet and French Horn, the professional life of William Ennis Thomson (b. 1927, Ft. Worth, Texas) was devoted to collegiate-level music theory and composition. His primary thrust in research and writing centered upon the cognitive/perceptual foundation of music, but the range of his many books and articles extends to political and historical aspects of academe. A complete listing of published articles can be found in Wikipedia, (William Ennis Thomson).

1975-79 Thomson chaired the Advanced Placement in Music Test Committee; 1971-75; served as Music Panel Member and Examiner for the National Endowment for the Arts; was Fellow and Policy Committee member of the Ford Foundation CMP, 1963-76; and board member, Buffalo Philharmonic,1976–80.

Early in his career Thomson composed award-winning works for band, orchestra, chorus and various chamber media. He served in the U.S. Navy from 1945-46, mainly as band member aboard the aircraft carrier Lexington.

Now retired from USC, he lives in Bloomington, Indiana.