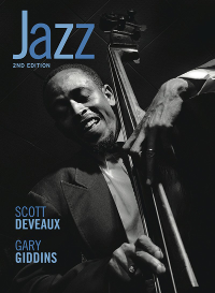 Now in its second edition, Scott DeVeaux’s and Gary Giddins’s Jazz provides instructors with a variation on the traditional jazz history textbook. Rather than moving from style to style, DeVeaux and Giddins divide the book into five parts:

As the authors note, the last part of the book departs from the usual approach taken in jazz history textbooks much in the same way that the music itself moved in several directions—rather than in a pure linear fashion. It also addresses a few ways in which jazz was combined with other styles of music, taking the term “fusion” beyond the realm of jazz and rock and applying it to Latin jazz, rhythm and blues, and acid jazz.

As one can see from the chapter listings above, after beginning with the standard (yet necessary) discussion of the elements of music and instruments, the text deviates from the norm with each section presenting the material in a more unique way. For example, in the part on Early Jazz, there is a chapter discussing the first great improvisers. The section on the Swing Era continues similarly with a chapter on the influential soloists from that time, but also devotes a chapter to the changes that occurred in the rhythm section. Part IV contains two chapters on compositional approaches. The first is devoted to Thelonious Monk, Charles Mingus, Gil Evans, and George Russell, the second on modal techniques in the works of Miles Davis and John Coltrane.

Like all textbooks nowadays, there are plenty of bells and whistles to go along with Jazz. W.W. Norton includes what they call “Total Access” with each new copy of the text (which is sold separately if you purchase a used copy). This provides audio and video examples for the chapters, interactive listening guides, “Author Insight Videos” where the authors discuss certain aspects of the text in greater detail, and the e-book version of the text. There are also the usual resources such as timelines to put the development of the music into greater historical perspective, brief quotes by notable musicians to help make the information more tangible for instructors such as PowerPoint slides, a test bank, and coursepacks for the Blackboard and WebCT course management systems. A few features are more unique, though, such as the appendices on film and jazz, jazz recordings, and graphic design and jazz. The latter occurs in the middle of the book in a full color spread that goes on for several pages. It is an interesting feature, and one that helps make the music more accessible for the students.

The content of the chapters is of a high quality, as artists are discussed in an informative and approachable manner. All of the tracks provided for the listening guides are representative of the musicians’ work as well. There are, though, two things that are disappointing about the book. First, no bullet points are provided in the chapters, only at the end of each part (not chapter) in the summary. Though the writing is engaging, bulleted lists do help break up the monotony of continuous prose. They can also provide students with a quick reference while reading the remainder of a chapter, helping to ensure that the information is absorbed with as much clarity as possible. In this respect, there are other books, such as Mark Gridley’s Jazz Styles and Henry Martin and Keith Waters’s Essential Jazz: The First 100 Years, that are stronger.

The other issue that I find problematic is the manner in which the chapter on Miles Davis and John Coltrane is organized. Davis’s first great quintet (with John Coltrane on tenor saxophone, Red Garland on piano, Paul Chambers on bass, and “Philly” Joe Jones on drums) is addressed only briefly, not long enough given their importance. For the sake of cohesiveness, it would have also been better had the discussion of John Coltrane’s music occurred after the entire discussion of Davis’s pre-fusion work had taken place. Instead, the chapter moves from Davis’s album Kind of Blue and Bill Evans’s work to Coltrane, and then returns back to Davis to discuss his second great quintet from the 1960s. Perhaps the intent of this was to move chronologically through the chapter, but in doing so, clarity is sacrificed.

Overall, DeVeaux and Giddins do an excellent job covering the music. The music is discussed effectively in an approachable manner and the resources are helpful (both for students and instructors). Most of all, the presentation of the book is done so refreshingly. For those who are looking for an alternative to the common chronological “gallery walk” (as an editor once put it to me) of artists found in most jazz history textbooks, Jazz is definitely worth consideration.

Matthew Shevitz is the Chair of the Humanities and Music Department and professor of music at Harold Washington College in Chicago, Illinois. He is the editor of the CMS Forums component of  College Music Symposium and a regular contributor to DownBeat Magazine. In addition to teaching, writing, editing, and administrative work, he actively performs jazz and popular music throughout the Midwest.