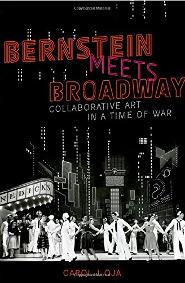 In recent years musical theatre scholarship has been grappling head-on with the inherent heteronormative whiteness of the Broadway musical (white boy and white girl meet, fall in love, separate, and reunite) and has thus been able to generate important discussions about race and gender identification as they relate to the genre. Warren Hoffman, in The Great White Way: Race and the Broadway Musical, decries, “Yet despite the presumed ‘all-Americanness’ of the genre, even a quick perusal of most musicals reveals that ‘all Americans’ are not well represented by this art.”1 At a session during the 2015 annual conference of the Association for Theatre in Higher Education (ATHE, CMS’s corollary in the theatre realm), roundtable participants vehemently called for a reconsideration of race-related discourses in musical theatre studies.

Carol J. Oja’s magnificent Bernstein Meets Broadway: Collaborative Art in a Time of War demonstrates how effectively and convincingly such a transformative approach to musical theatre historiography when it comes to race and gender identification can take place. In addition to offering cogent insights based on standard artifacts such as scores and libretti, Oja proves that investigating the acts and arts of performance can provide illuminating lenses—both frighteningly uncomfortable and engagingly optimistic—through which to view musical works.

In Bernstein Meets Broadway, Oja focuses on three works from the 1940s and their symbiotic relationships: the ballet Fancy Free (1944), the nightclub act The Revuers (launched in 1938), and the musical On the Town (1944). Residing at the center of the story is the dynamic and talented quartet of Leonard Bernstein, Jerome Robbins, Betty Comden, and Adolph Green. Oja situates the three works and their collaborative creators in the context of World War II, revealing the ways in which these innovative artists and their resultant cultural milestones challenged social conventions of the time and remain relevant in the twenty-first century. Oja arranges her discussion into three large sections: “Ballet and Nightclubs,” “Broadway and Racial Politics,” and “Musical Style.” The first section centers on Fancy Free and The Revuers, while the latter two focus on On the Town.

Oja begins her discussion with Fancy Free, the Jerome Robbins ballet with a brilliant score by Leonard Bernstein that brought the two iconic artists together for the first time. The ballet concerns three sailors spending their one-day leave in New York City. Oja highlights Bernstein’s montage technique for the music, which includes sounds emanating from jazz, Afro-Cuban music, and the musical style of Bernstein’s romantic partner at the time, Aaron Copland. She also offers captivating insights into how the ballet’s narrative and visual dimensions reveal a queer subtext, connecting them to the visual art of Paul Cadmus, especially his 1934 painting The Fleet’s In! and its theme of multiple types of sexual desires among servicemen. According to Agnes De Mille’s account of opening night, many men in the audience recognized the homoerotic codes (23). Oja places the creation of Fancy Free within a compelling framework of its creators, their lifestyles, and their multi-layered artistic goals.

From ballet, Oja takes us to the world of nightclub and radio through her discussion of The Revuers, a group of five entertainers that included Betty Comden and Adolph Green. The Revuers’ songs and skits reflected the troupe’s progressive political attitudes and demonstrated an engaging ability to present social viewpoints through parody and transgressive entertainment. Oja stresses how The Revuers lived their commitment to racial equality by performing in venues that welcomed people of all races, such as the Village Vanguard and Café Society. Bernstein, importantly, would occasionally serve as the group’s pianist. Oja gives the reader a sense of the variety and juxtaposition of topics that appeared in the group’s skits, which she calls essentially “mini-musicals, fusing a broad span of theater genres that included operetta, stand-up comedy, and vaudeville” (66). The skits of The Revuers are thus akin to the montage style of Fancy Free in their hybridity. Oja offers a valuable sampling of excerpts from Revuers skits drawn from transcripts of radio broadcasts, recordings, or surviving scripts.

Oja’s insightful treatments of Fancy Free and the work of The Revuers serve in many ways as precursors for her discussion of On the Town, the musical whose significance occupies most of the book. The show, with book and lyrics by Comden and Green, music by Bernstein, and choreography by Robbins, shares its basic plot with Fancy Free—three sailors (Ozzie, Chip, and Gabey) are on leave for twenty-four hours in New York City and each has his own encounters and adventures. On the Town, as Oja reveals, is not just a celebratory romp but also a sophisticated musical about race, though its treatment of the topic is implicit, as opposed to shows such as Show Boat or South Pacific, where racial aspects are clearly foregrounded. (Oja reminds readers of this revelatory focus in On the Town by titling the first of two sections concerning the musical “Broadway and Racial Politics.”) In On the Town, the creators chose to create a multi-ethnic New York on stage, reflecting how the city looked in real life. The multi-racial casting that Oja documents (including short biographical sketches of some of the key performers) is not something that is evident by looking at standard print sources, such as the libretto or the musical score, but instead comes from an investigation of the performances themselves. The presence of six African Americans on stage (four dancers and two singers) was not called out as being significant in any print materials, and the show’s creators did not feature them in any sort of racially stereotypical specialty numbers but rather showed them to be everyday New Yorkers.

Oja’s discussion of the casting of Japanese American dancer Sono Osato as Ivy Smith, the musical’s principal female role, reveals the complexity of racial politics in America, especially during wartime. Osato, who was interviewed for the book, had been a dancer with the famed Ballet Russes de Monte Carlo before going to Broadway, and her character Ivy Smith, winner of the monthly Miss Turnstiles contest, reflected both exotic and all-American notions of femininity. Nothing in the libretto or music suggests that this role is conceived for anyone other than a young, white, athletic performer. Visual representations in the show, however, reflected Osato’s Asian ancestry, including poster images of Osato as “Exotic Ivy Smith” that formed part of the set. This casting choice was an especially bold move during World War II, since the U.S. government at the time was detaining huge numbers of Japanese Americans, including Osato’s father. Indeed, Oja relates the heartrending fact that Sono’s father was interned in Chicago during his daughter’s opening night in On the Town and hence could not attend a performance that would have made any father proud. Furthermore, Gabey’s pursuit of Ivy, as played by Osato, would lead not to a fling in the 1940s but instead to miscegenation (141).

Issues of race thus played on-stage and off-stage in On the Town. Oja also tells us about the African American violinist and conductor Everett Lee, who took over as pit orchestra conductor in September 1945, and in doing so became the first American American to conduct a major musical on Broadway. Lee, who Oja interviewed for the book, had previously been concertmaster of the On the Town orchestra, and Bernstein personally chose him to lead the performances.

Oja devotes the final major section of her monograph to “Musical Style.” She expands her remarks on Fancy Free to offer cogent insights on the “Bernstein sound” and shows how Bernstein challenged, transformed, and synthesized various influences (e.g. Copland’s quintessential soundworld and Latin dance music) to create his own stylistic signature. This section is written in an especially engaging manner that will satisfy both trained musicians looking for specific analytical evidence as to what makes Bernstein’s sound so distinctive as well as general readers with a rudimentary knowledge of music theory who are interested in knowing more about why they are drawn to this particular soundscape. Thoughtful discussions of On the Town’s opening numbers, ballads, comic numbers, and orchestral and dance music (dubbed “symphonic ideals” [257]) provide telling insights into the genesis and structural coherency of the ebullient score. Oja devotes an entire chapter to the nightclub scene, demonstrating how it “provides a concise opportunity to round up the myriad issues that animated the show overall, including the degree to which it sought a realistic depiction of New York City during World War II” (270). The sequence progresses from Diamond Eddie’s Nightclub, a fictional venue reminiscent of the real ones where The Revuers had performed, to the Congacobana with its Latin theme, and ultimately to the Slam Bang Club, where black swing was the norm.

In a concluding epilogue, Oja reflects on how Bernstein’s concern for social issues, evident in the normalizing of race in On the Town, presage later works, including West Side Story and Mass.

Oja accomplishes several remarkable feats with Bernstein Meets Broadway. First and foremost, it is an insightful, eminently readable, and eye-opening look into the creation and performance of three culturally significant works in different genres, a ballet (Fancy Free), nightclub routines (for The Revuers), and a Broadway musical (On the Town). Second, it contextualizes these works within broader contexts of gender and race during the Second World War and makes us aware that even when we might not immediately recognize gender and race as constituent parts of a musical work, they are definitely present. Finally, the book demonstrates how important it is to look beyond standard print sources when researching any act of performance. By engaging with performances themselves through casting, orchestral personnel, stage imagery, and much more, a far richer and more nuanced picture emerges than might otherwise be evident.

Carol Oja refers to the three works profiled in her book as “part of a process in which American creative and performing artists sought to express not only their individual identities but also those of a multifaceted nation” (293). In the second decade of the twenty-first century, with its challenges concerning race and equality for all human beings, the important messages that Bernstein, Robbins, Comden, and Green proffered in the 1940s continue to resonate.

William Everett is Professor of Musicology and Associate Dean for Graduate Studies and Curriculum at the University of Missouri-Kansas City Conservatory of Music and Dance. He is the author of Sigmund Romberg (Yale UP, 2007), Rudolf Friml (Illinois, 2008), contributing co-editor of The Cambridge Companion to the Musical (2002; 2nd ed., 2008), and a contributing editor for musical theater for the Grove Dictionary of American Music, 2nd ed. His research specialties include American musical theater, particularly operettas of the early twentieth century, and the relationship between music and national identity.

Everett was reviews editor for College Music Symposium from 2000 to 2006, and is currently a member of the editorial board for Studies in Musical Theatre and the editorial advisory board for Palgrave Studies in British Musical Theatre. He served as Program Chair for CMS’s 2009 International Conference in Croatia and was the Society’s national vice-president from 2011 to 2013. He currently chairs CMS’s International Initiatives Committee.