The Birth of the Cool of Miles Davis and his Associates by Frank Tirro - CMS Sourcebooks in American Music No. 5 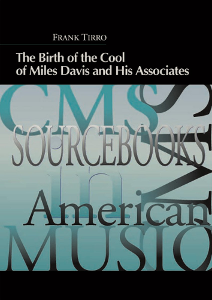 In the early 1940s Charlie Parker and Dizzy Gillespie originated the style of modern jazz that came to be called bebop. Soon thereafter several new styles emerged. A few of Parker’s and Gillespie’s successors tapped only selected characteristics of bebop. Some of them continued traditions of the swing era, and some combined swing era approaches with aspects of bebop and methods of Ravel, Debussy, and Stravinsky. One collection of such styles has come to be classified as “cool jazz.” In his book, The Birth of the Cool of Miles Davis and His Associates, Frank Tirro has prepared an admirable account of these amalgam styles, focusing primarily on recordings by a nine-piece New York band that rehearsed in 1948, 1949, and 1950, and was led by trumpeter Miles Davis. The music of this band was dubbed “The Birth of the Cool” by composer-arranger-producer Pete Rugulo when their recordings were collected together and reissued on a long-play album in 1957. Eight tracks from that album are included on a CD that accompanies this book.

The music of the Miles Davis Nonet was arranged mostly by the band’s saxophonist Gerry Mulligan, who contributed seven pieces. There were also three contributions by pianist John Lewis and two by arranger Gil Evans. Tirro clearly explains what led up to their work. This includes exploring music by the swing era big band of Claude Thornhill, and Gil Evans’ inspiration in Billy Strayhorn’s “Chelsea Bridge” on a 1941 recording by the Duke Ellington band, which is included on the book’s CD. The bulk of the book contains informative and insightful analyses for each piece that was recorded by the nonet. Scores and lead lines are interspersed throughout the text to provide valuable explication of points that Tirro makes in his analyses.

Among the reasons for studying this music, Tirro offers these:

1. “The history of this music is fascinating. It did not spring up full grown but has a traceable past with several roots that spread deep into the fertile topsoil of modern jazz” (6).

2. “The music is intrinsically valuable. Disseminated on landmark recordings, it has achieved the status of classic jazz repertoire and ranks today as a monument of jazz” (7).

3. “The music profoundly affected the musicians involved in these sessions, and several of them subsequently moved on to reshape jazz of that and succeeding decades” (7).  Furthermore, Tirro contends that answers need to be offered for the questions of

4. “Who deserves the credit for the various contributions to this repertoire?” (7)

7. “Was there a racial issue associated with this music?” (8)

The author is to be commended not only for so systematically posing these questions, but also because the book’s discussions successfully answer each of them. For instance, he shows how “these jazz musicians as they worked together were not part of a movement of dissent or artistic confrontation but rather a band of serious-minded professionals seeking to improve themselves and their art. There were no racial or political issues at stake in this artistic endeavor; the men were musicians crafting a new sound from old materials” (17).

Tirro also analyzes music that coexisted with the Davis band’s work and possesses similarities to it. This includes Ralph Burns’s “Early Autumn” from a 1948 recording by the Woody Herman band, which is included on the book’s CD. Thirteen pages are devoted to discussing music that was independently created in California during 1946, 1948, and 1949 by musicians led by Dave Brubeck, two recordings of which appear on the book’s CD. The author helps us understand the importance of the inspiration for these West Coast works in exercises for courses the musicians were taking from French composer Darius Milhaud at Mills College. Counterpoint, fugue, asymmetric meter, polytonality, rondo form, and scherzo occur in the Brubeck band’s works. Tirro also touches on follow-ups to the Davis sessions in music by Mulligan and the bands of trumpeter-composer Shorty Rogers, such as the latter’s “Morpo” of 1953, which is included on the CD.

Among the numerous analyses of individual pieces, one that exemplifies the depth of Tirro’s research reveals that the form of the band’s piece “Israel” could be traced to its composer John Carisi’s concurrent studies with German composer Stefan Wolpe. Carisi’s mentor was teaching atonal and serial music by Schoenberg, Berg, and Webern at the time of these recordings: “Carisi injects a variety of advanced compositional ideas that include harmonies and melodic fragments based on fourths and fifths rather than the triadic intervals of the third, tone clusters, and even a hint of serial technique . . . The opening measure is tonally ambiguous; the second measure features a vertical structure comprised of two open fifths above C, as well as the subdominant F; and the third measure, which sounds C major in the piano and low brass, surprisingly features four melodic notes in a different key, a B mode” (132-133). Moreover, Tirro points out that all this is contained in a 12-bar blues form!

The text is embroidered with useful quotes from many sources, including biographers and musicians. A few of the best quotes address the nature of “cool” in the Miles Davis trumpet style. For instance, Dizzy Gillespie mentioned that “they expressed less fire than we did, played less notes, less quickly, and used more open space” (137). Biographer Ian Carr wrote that Davis “alternates long melodic lines with lovely pauses, broken rhythms and longer notes with just a hint of vibrato which enhances their swing and their emotional power” (96). Elsewhere, Tirro comments that “Miles’s sound is mellow and nuanced, that of a chamber musician . . . Miles’s solos are the epitome of introspection and restraint” (29). Regarding the Davis solo on “Move,” the author observes that “With all the speed and fury of the head behind him Miles relaxes and plays an ornamented two-note, descending third motive that he presents in four different guises. So simple, so cool!” (121).

Though a number of accounts about this music credit Davis as the main force and Evans as the conceptual overseer, Tirro clarifies the credits regarding Mulligan. Davis played trumpet, wrote one tune, and booked the musicians, but “while performing and arranging for the Claude Thornhill Orchestra he [Mulligan] played clarinet as well as tenor and baritone saxophones, and it was after their meeting in this band that he and Evans began planning a small ensemble with Thornhill sound capabilities” (97). “Of the twelve numbers recorded by the Miles Davis Orchestra for Capitol Records in 1949 and 1950, the largest number—six—were arranged by Mulligan, three were composed by him, and he also played on all the tracks. In addition, he composed and arranged another piece for the band, ‘Joost at the Roost.’ On the basis of these accomplishments, he must be credited as a major architect for the Miles Davis Nonet and as a founding father of the style and movement called cool jazz” (117).

Added attractions are the book’s numerous sidelights, which may prove to be as fascinating for readers as the main text. For example, Tirro offers a splendid appreciation of the improvisatory style of Stan Getz, as heard in “Early Autumn,” by the Woody Herman big band of 1948. Cole Porter’s creativity is touted in a brief analysis of the composer’s “Ev’rything I Love.” The author also touches on the explorations of composer-pianist-pedagogue Lennie Tristano and saxophonist Lee Konitz, his student who played with the Davis Nonet: “Through Tristano’s example and teaching, Konitz developed an improvisational style that did not repeat small figures, did not rely heavily on asymmetrical phrases and irregular bebop accents, and emphasized instead long series of running notes that ran gracefully up and down the upper partials of the chord structure” (44).

The book’s footnotes offer nuggets of easy-to-read information that should delight jazz fans, not just musicologists and music students. In fact, Tirro’s definitions of jazz terminology in footnotes are so good that they warrant publication as a separate compilation for lay readers, as exemplified by his explanations for “soli” and “head.” The book’s reference value is enhanced considerably by a twenty-page “Personalia” appendix that was prepared by its editor Michael Budds to provide basic information concerning the lives and careers of the historical figures referenced in the text in order to assist readers unfamiliar with their significance. It runs from alto saxophonist Cannonball Adderley to trombonist Mike Zwerin, and it not only sports jazz musicians, but also includes such influential modern composers as Milton Babbitt, Georges Auric, Paul Hindemith, Frederick Delius, Ferruccio Busoni, and Erik Satie.

Because of the wide net he casts for the styles within the “cool jazz” designation, the well-measured clarity of his writing, and his helpful explanations of technical terms and concepts, Tirro may succeed in his wish that “twenty-first century college students to whom this book is especially addressed” (3) should benefit from its contents. Jazz history teachers and jazz fans will most certainly enjoy the work, too.

Bravo to Tirro! We are much the richer for his immense labors. He has celebrated the music by explicating its essential parts, and he has clearly placed the sounds in historical perspective.

Mark C. Gridley, Ph.D., is a jazz musician who wrote the critically acclaimed Jazz Styles book, which has undergone eleven editions and six translations, becoming America's most widely used introduction to jazz. Additionally, Gridley is internationally recognized for his scientific research on creativity, perception, and taste in music and art.