For music makers and educators, purchasing and maintaining audio hardware and software is an important decision at both personal and institutional levels. Given the often strict limitations in budget, it is important to learn how to build and use a functioning music technology station without compromising essential features. If the users can assess and define the exact purpose and functions needed to achieve specific musical goals, they can purchase a computer and software optimized for music at low cost. In this article, I will walk you through my own self-study experience of creating such a machine at about $1000. I will discuss hardware and software features that are important for audio, and will provide benefits and challenges of low-cost computing.

I recently bought a new computer, after using a 2012 Macbook Pro. As a working electronic musician and a teacher of music technology, I have purchased and used four laptops and many music software in the past decade. Purchasing and customizing the right hardware and software for computer music and music technology research became a significant budget item every 3-4 years, and it was important to create a reliable machine that could perform well on stage and in class. At every purchase, I selected a model of Macbook with a decent digital audio workstation (DAW), and each system, initially, cost me about $1500. I often spend a few hundred dollars more for software update and repair. This time, I decided to reduce the cost in hardware and software purchases for the following reasons:

I also set four goals and limitations for this project:

Three components of a computer mainly decide the speed and power of the machine. They are processor speed, RAM size, and hard drive speed. If any of these three is significantly inferior, it could slow down the performance. In the case of my former computer, a 2012 Macbook Pro (www.everymac.com/systems/apple/macbook_pro/specs/macbook-pro-core-i7-2.6-15-mid-2012-unibody-usb3-specs.html), the hard disk speed was causing a bottleneck while the CPU and RAM barely worked at its fullest. The diagnosis could be done by using the Activity Monitor application located in the Utilities folder. 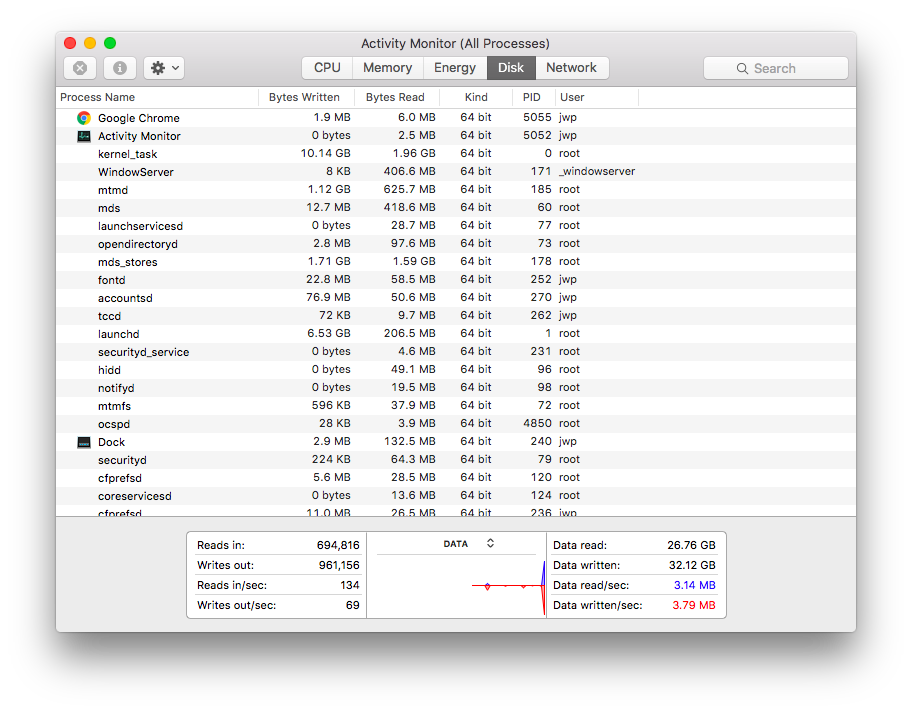 I also thought about how I actually use the music applications in my teaching, composition, and performance. Logic Pro is the DAW I use the most, but I realize that I do not utilize much of its unique features: I hardly ever use the Apple Loops or software synth in my composition. DAW for me is a workplace where I can arrange my own recordings using standard effects and processors. In other words, I realize that I do not have to use Logic Pro as long as I endure a few days of learning a new DAW that does basic multitrack recording and editing.

As a part of my role as a professor, I must introduce and teach industry-standard software and hardware to my students in order to prepare them for music engineering and production jobs. Products considered to be industry-standards tend to be expensive compared to the many freeware and budget-friendly applications that are available. Fortunately, the institution where I teach has computers with software and hardware that are superior to the equipment typically used in recording studios and radio stations. I have access to such gear everyday as a part of my position, so I have decided not to own expensive software on my laptop.

Here is the list of hardware and software I have purchased and currently use. It is working well as long as I acknowledge a few challenges.

After a long thought, I bought this model of Mac (http://www.everymac.com/systems/apple/macbook-air/specs/macbook-air-core-i5-1.6-11-early-2015-specs.html). It's currently the cheapest and the smallest laptop one can purchase in the Apple Store. Using Activity Monitor, I learned that I am barely using the full capacity of the processing speed, and I decided to not purchase a more expensive model with a faster processor. I also do not see the need of Retina Display for my music-related works. A bigger and high-resolution screen would be helpful, but it's not necessary. With the money I did not spend for bigger and better screen, I upgraded the RAM to 8GB.

The SSD comes with a big limitation though. The size of the hard disk in the Macbook Air is 128GB. It is a significant reduction from a 500GB disk space on my former computer. This issue needs to be addressed strategically for electronic musicians, because DAW projects involving audio recordings are quite large. 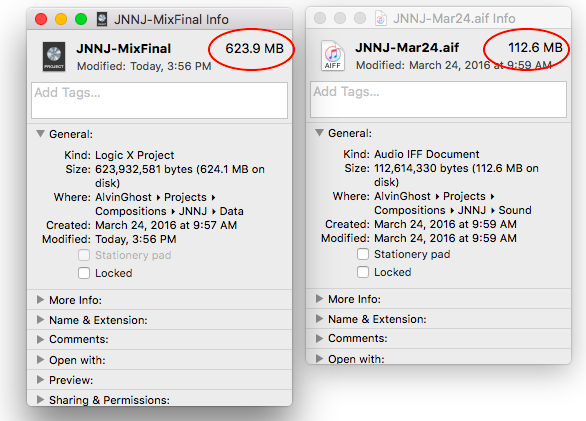 My solution was to purchase a non-SSD portable hard drive to store most of the data. I decided to, exclusively, store all pictures, MP3s, and movies on the external hard drive. I also decided to keep very old audio projects only on the portable drives. It is a common practice to keep multiple backups of audio projects, so I am using my older portable hard drives (I have three) to retain multiple backups of the projects.

Ardour (https://ardour.org/) is a fully-functional DAW that is available in both Mac and Linux. You can purchase the software with minimum of $1. It works like any other DAWs, except that it does not have built-in samples or plugins. This is an undeniable disadvantage. I would miss Logic's effects and software instruments, but they were not the most important reasons for my use of a DAW. My plan to make up for this disadvantage was to develop my own plugins and effects using other software such as Faust (http://faust.grame.fr). I planned to use my university's recording studio for a full-scale production and recording session.  (Note: Ardour 5 was just released on August 12. I have not used it yet, but the price remains the same.) 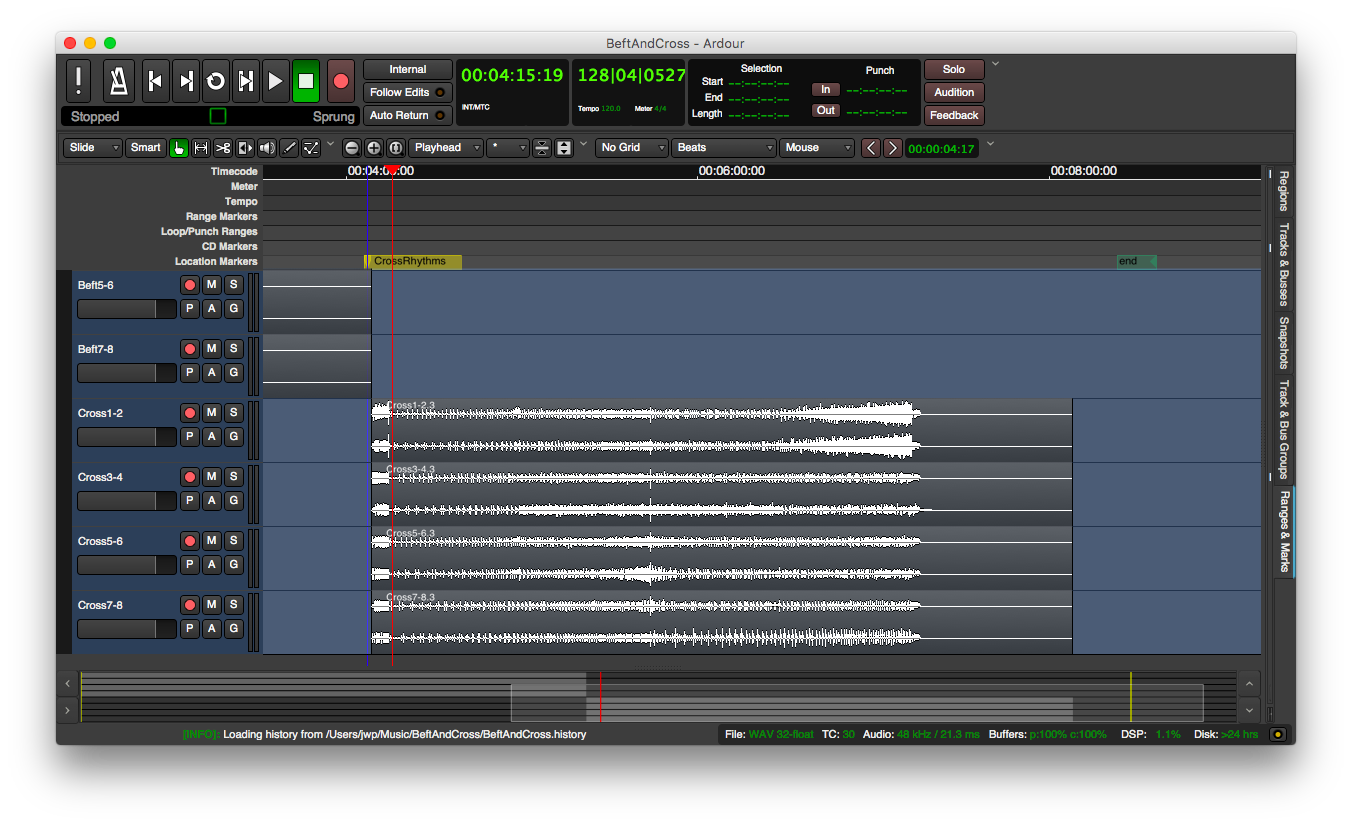 Faust (http://faust.grame.fr/) is a freeware that works as a stand-alone audio software and can also be used to create original VST and AU plugins. The usage and learning of the software does not necessarily require a programming background, and the language is quite intuitive and inspiring. However, the user of this software does need to have a general understanding of digital audio theory in order to create and modify plugins. My plan is to create and share plugins for Ardour and other software using Faust. Faust is available for Mac, Windows, Linux, and a web browser (http://faust.grame.fr/onlinecompiler/). 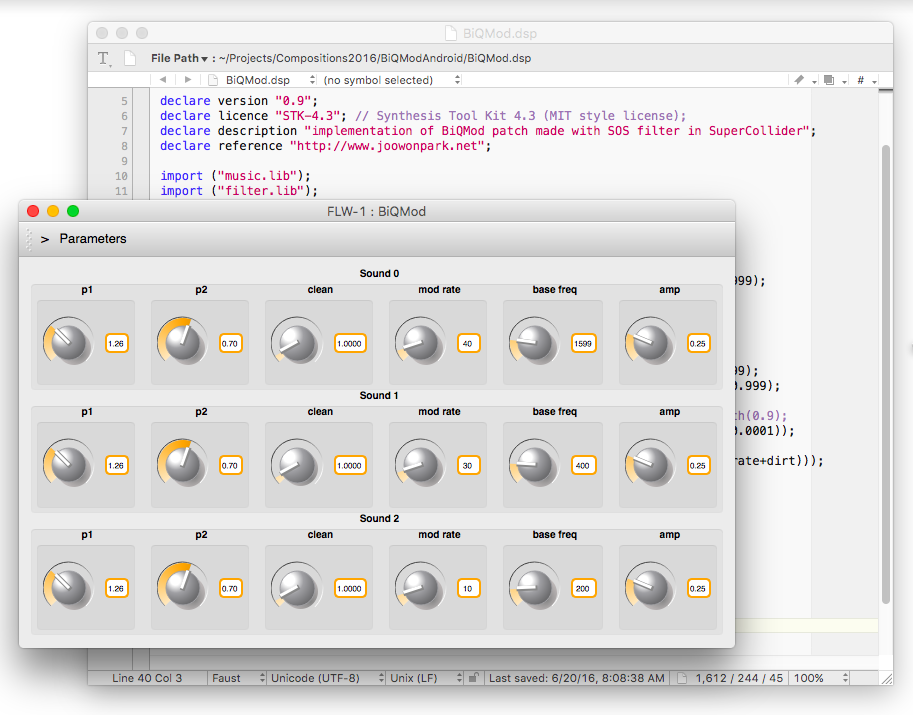 MuseScore (https://musescore.org/) is a fully-functional music notation software. It is relatively less flexible than Finale or Sibelius, but I believe that it is a great alternative. I have been using it for about 2 years, and I am quite satisfied with it. MuseScore is available for Mac, Windows, and Linux. 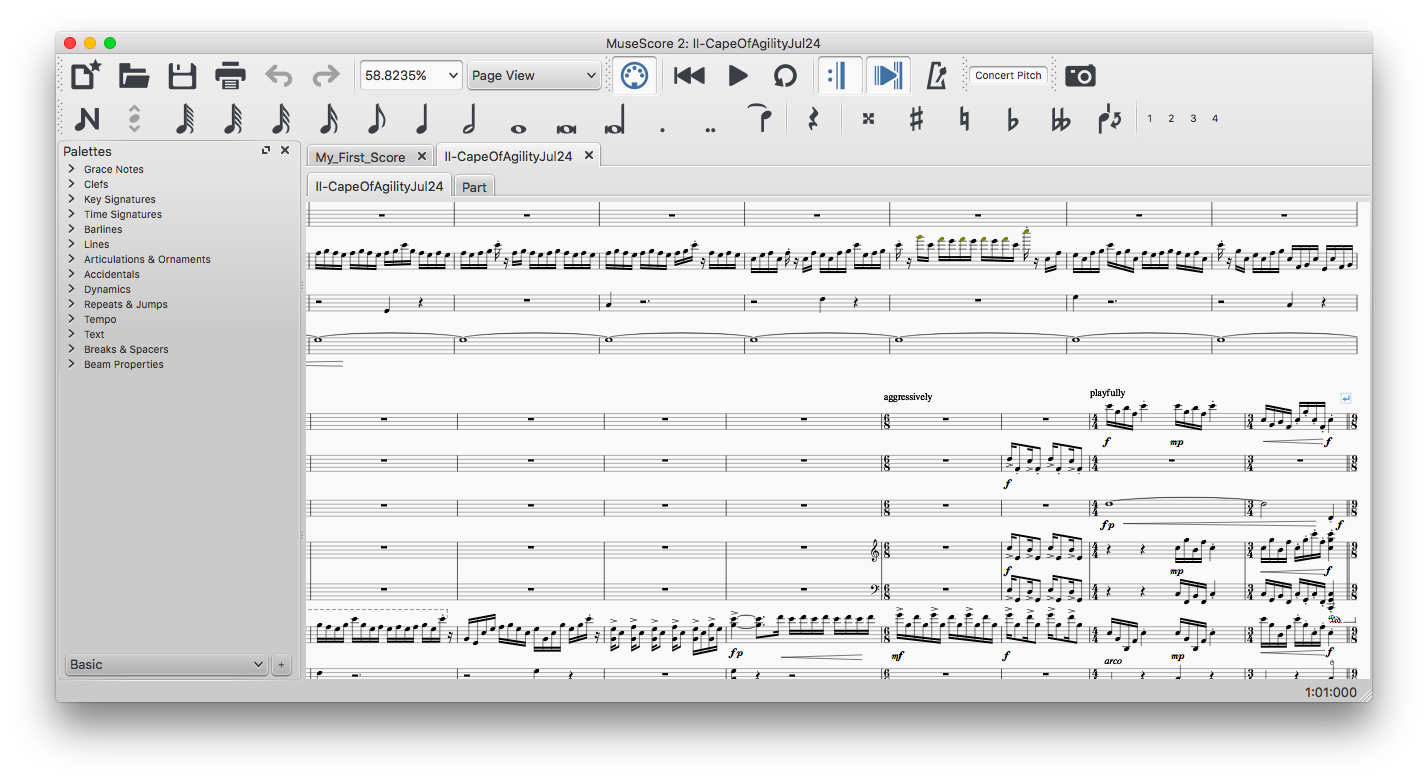 SuperCollider (http://supercollider.github.io/download.html) is my go-to application for composition and sound design. I am thankful that it is well-maintained and it is a freeware. The trade-off of using SuperCollider as a main tool could be that it may take a while to get used to the software compared to DAWs. SuperCollider is also available for Mac, Windows, and Linux. 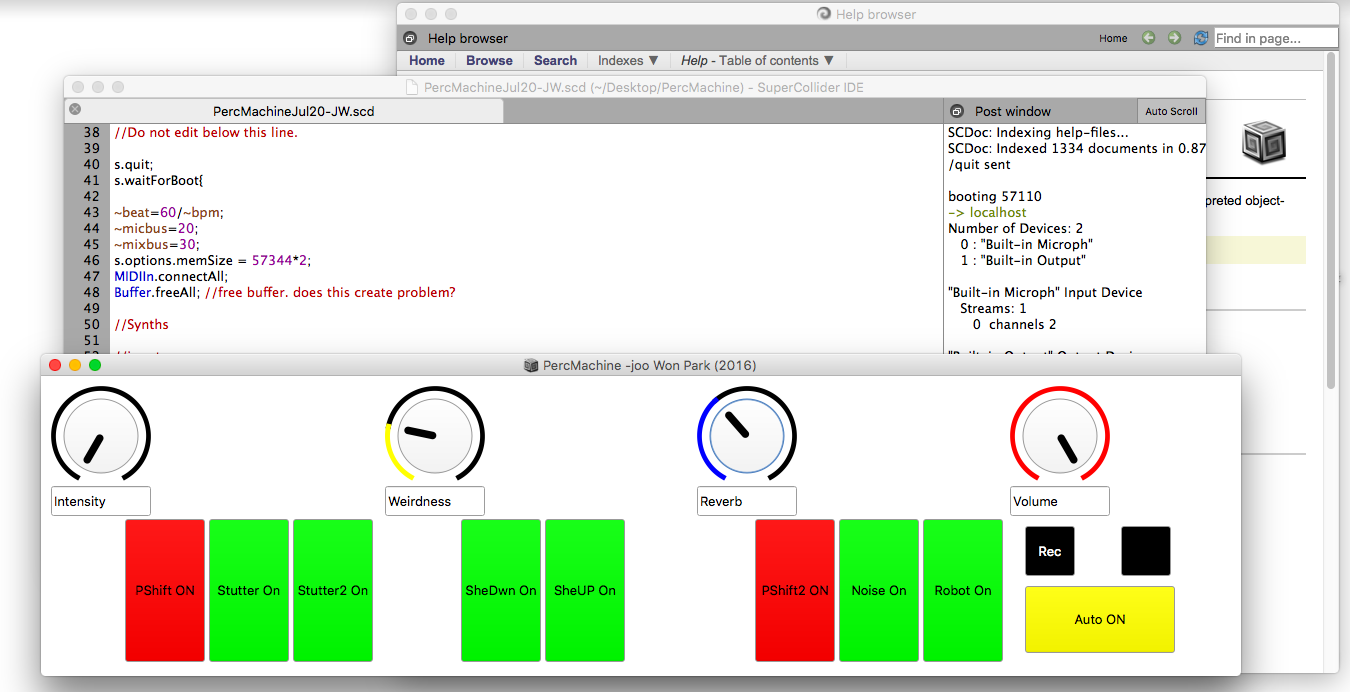 Some of the freeware I am using requires that the computer is capable of running developer tools. By installing Xcode from the Apple Developer page, I gained access to programming features of Mac. Installing Xcode, however, takes a huge disk space (about 10GB), which is significant considering a 128GB SSD. 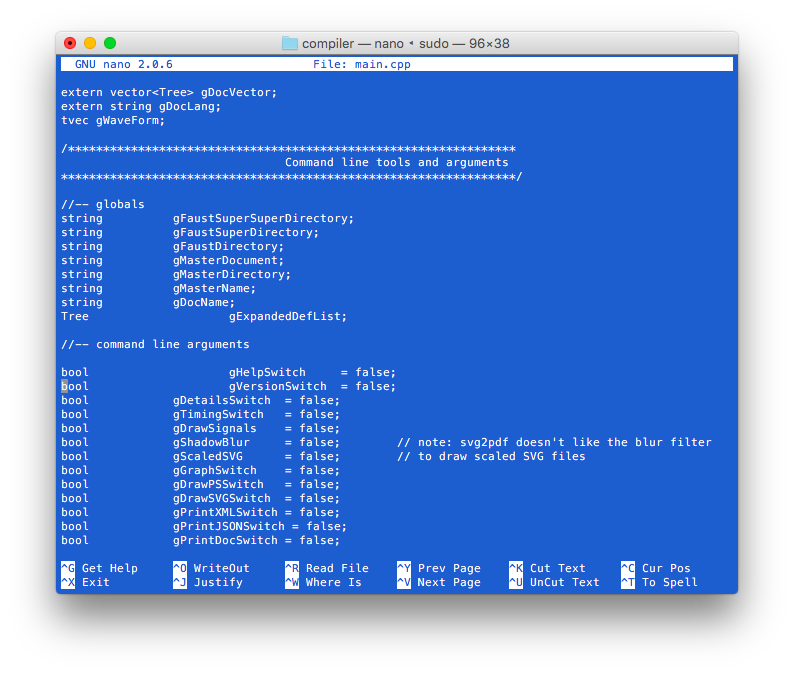 Amadeus (http://www.hairersoft.com/lite.html) is a powerful and easy-to-use audio editor. The software is available for Mac only, but a free alternative software for Windows and Linux is Audacity (http://www.audacityteam.org/). I decided to purchase this software for fast editing and audio file conversion.

One thing that I was lacking in using the above applications is a good audio visualization and analysis tool. Sonic Visualiser (http://www.sonicvisualiser.org/) fills that gap, and is available for Windows and Linux, too. 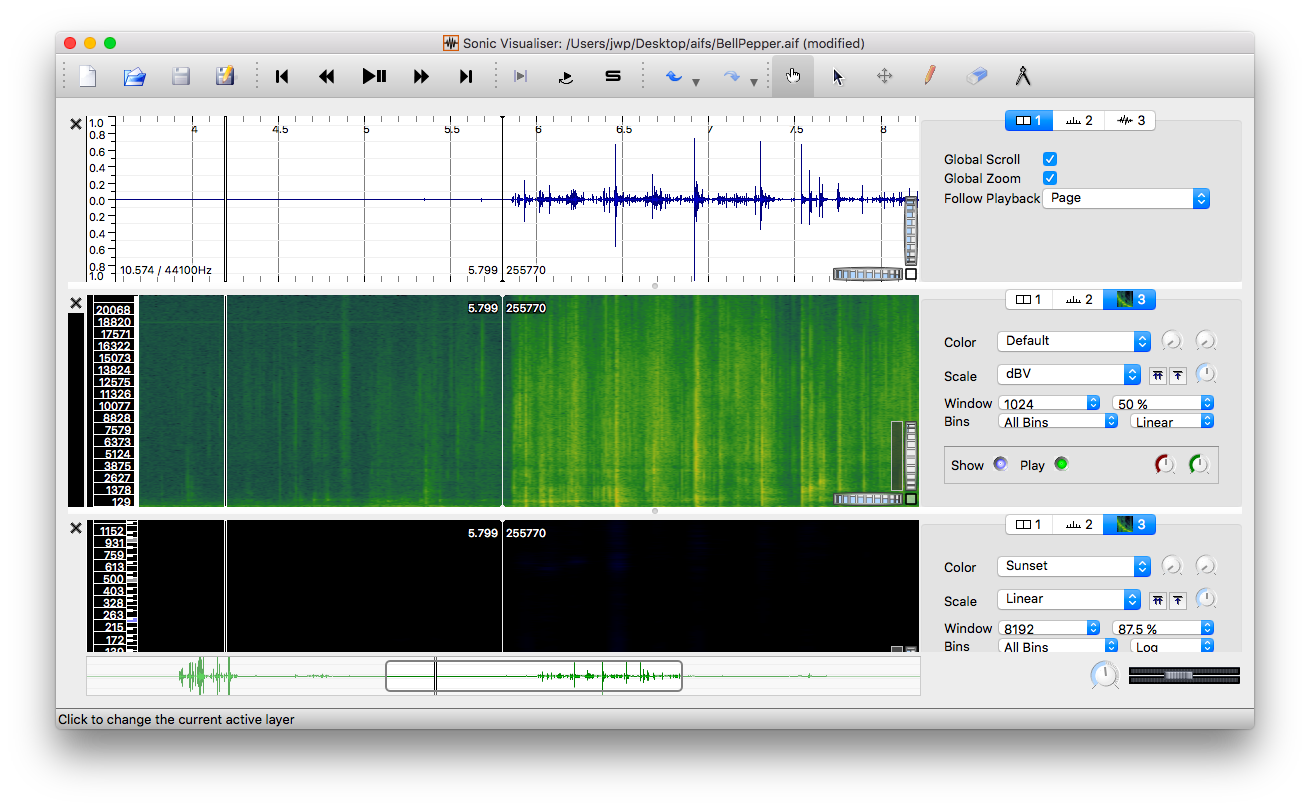 I spent a little more than $1000 for a well-functioning Mac geared for computer music composition. So far, it works, and I do not feel the lack of speed or processing power. At the same time, there are challenges and limitations that I must acknowledge:

Using a low-budget computer has made me think, compose, and perform computer music in a more efficient way. Due to its limitations and personal preferences, I do not think this system will work well for every music technologist. However, my experience in diagnosing the actual usage of processing power and standard music technology software could be relevant to musicians who are in need of reducing the cost of their next computer. The institutions with low technology budget can also start or maintain computer labs if the hardware and software are chosen carefully.

If one wishes to experiment with low-cost computer upgrades or purchases, I recommend the following:

Joo Won Park (b.1980) wants to make everyday sound beautiful and strange so that everyday becomes beautiful and strange. He performs live with toys, consumer electronics, kitchenware, vegetables, and other non-musical objects by digitally processing their sounds. He also makes pieces with field recordings, sine waves, and any other sources that he can record or synthesize. Joo Won draws inspirations from Florida swamps, Philadelphia skyscrapers, his two sons, and other soundscapes surrounding him. He has studied at Berklee College of Music and the University of Florida, and currently serves as an Assistant Professor of Music Technology at the Wayne State University. Joo Won's music and writings are available on ICMC DVD, Spectrum Press, MIT Press, PARMA, Visceral Media, MCSD, SEAMUS CD Series, and No Remixes labels.