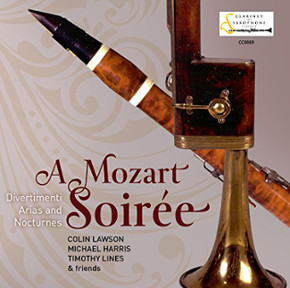 The basset horn has fallen in and out of favor a few times in history, most notably through Mozart’s relationship with the clarinetist Anton Stadler and again when Richard Strauss included it in his operas and wind sonatinas. A mellower cousin, it is often easily overlooked in the clarinet family. On this disc, a collaboration between the Birmingham Conservatoire and the Royal College of Music in London, professors, alumni, and students join to perform these works.

Stadler is credited with inspiring Mozart’s output for the clarinet, especially the Quintet, K. 581 and the Concerto, K. 622, as well as his extensive use of the basset horn in La Clemenza di Tito and the “Gran Partita” Serenade, K. 361. The works on this recording are smaller works intended for more private consumption, probably for soirées organized by Baron von Jacquin. His daughter Franziska was a piano student of Mozart’s and played the premiere of the Clarinet Trio, K. 498 with Stadler and Mozart on viola at one of these events.

Two other notable basset horn players were in Vienna at the same time, Anton David and Vincent Springer. Including Anton Stadler’s younger brother Johann, Mozart had access to four remarkable players of both the clarinet and basset horn. From 1783-85, Mozart wrote over a dozen works for the basset horn, many of which are recorded on this album. Like Mozart, these four musicians also became Freemasons. Mozart used basset horns and trombones in Die Zauberflöte, K. 620 to evoke Masonic ideas. For example, on this recording, the Adagio in B-flat major, K. 411, for two clarinets and three basset horns contains rhythms depicting the three Masonic “knocks” as well as other harmonic symbolism consistent with Masonic beliefs.

The Divertimenti for three basset horns, K. 439b, encompass 25 movements plus five operatic transcriptions, of which thirteen are heard on this recording. Simrock published them split into six divertimenti in 1812 for the more modern and easily attainable two clarinets and bassoon. They have been arranged for many other combinations since then. It is doubtful that Mozart had any particular order in mind. Stadler is known to have performed basset horn trios in the 1790s while touring which included excerpts from operas, most likely these works.

The six Notturni, K. 436-39, K. 346, and K. 549 are settings of Metastasio for three singers and three basset horns. Constanze Mozart mentions both the Divertimenti and the Notturni in a letter to the publisher and composer Johann Anton André in 1800, noting that Stadler had many of these originals in his possession. The bass vocal part was undoubtedly written for Gottfried von Jacquin, younger brother of Franziska. It is also possible that he collaborated on the composition of the vocal parts with Mozart. These works evoke simpler, more intimate versions of vocal ensembles in Mozart’s operas.

The particular sound of the basset horn comes from the instrument having a narrow bore but being considerably longer than a clarinet, which creates greater resistance. They have been described as having a softer, more vocal tone. Colin Lawson, Michael Harris, and Timothy Lines overcome the basset horn’s inherent idiosyncrasies with aplomb, and are nicely joined by Barnaby Robson and James Maltby for the Adagio on this recording. Occasionally, some of the tempi seem a bit slow, but the pitch and musicality are fine. The singers dominate the Notturni so that we lose some of the interplay with the instruments, which could have been altered in the recording process, but it reflects how an actual performance might sound.

As for the letter of recommendation to Herr Beer, I don’t think it is necessary to send it to me: so far I have not made his acquaintance: I only know that he is an excellent clarinet player, but in other respects a dissolute sort of fellow. I really do not like to associate with such people, as it does one no credit; and, frankly, I should not like to give him a letter of recommendation —indeed I should feel positively ashamed to do so—even if he should do something for me! But, as it is, he is by no means respected here—and a great many people do not know him at all. 1

Although Mozart did eventually meet Beer, he was not Mozart’s choice for a collaborator. Mozart chose Stadler, who in the long run owed the financially strained Mozart a fair amount of money that he never repaid. It is interesting to speculate what might have occurred had Mozart followed his father’s advice rather than found friendship and inspiration from Stadler. The world of clarinetists and basset horn players may have been considerably poorer.

Jane Carl, Professor of Clarinet at the University of Missouri-Kansas City Conservatory of Music and Dance, and received her degrees from the University of Michigan. She has performed regularly with the St. Louis Symphony Orchestra including as acting assistant principal clarinet for four years from 1999-2003. She has been a member of the South Bend, Flint Symphony and Michigan Opera Theatre Orchestras and has performed with the Toledo Symphony Orchestra, the Kansas City Symphony, and the St. Paul Chamber Orchestra. She was on the faculty of Notre Dame University, Hillsdale College, and Andrews University, and has taught at the University of Michigan. She is also a board member, artistic adviser, and clarinetist with Summerfest, Kansas City's summer chamber music festival, and performs regularly with the Chamber Music Society of St. Louis. In 2007, she performed in recital and gave a masterclass in Beijing at the China International Clarinet and Saxophone Festival. In July 2008, she was the host and artistic chair of ClarinetFest 2008, the annual conference of the International Clarinet Association, hosting 1,100 clarinetists on the campus of UMKC for five days. She was a concerto soloist in August 2009 in Porto, Portugal at ClarinetFest, and often judges competitions at ClarinetFest including the Young Artists' Competition in 2006 and the 2012 Orchestra Audition Competition. She is chair of UMK's Instrumental Studies Division.