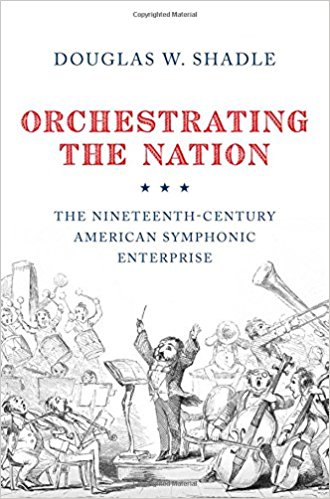 As an American orchestral conductor, I am always interested in learning about new scores and unfamiliar pieces, especially those which come from my own native country. Since many American symphonies from the 19th-century are now almost entirely unknown, I found Orchestrating the Nation: The Nineteenth-Century American Symphonic Enterprise, by Douglas Shadle, Assistant Professor of Musicology at Vanderbilt, to be an interesting and informative resource for learning more about this subject and the composers and works thereof. This review will discuss some of the main points Shadle makes in his book and explain the book's organization. It will assess the companion website and the author's work as a contribution to the field, as well as consider some of its more effective arguments. Finally, this review will include a brief mention of what I view as the book's weaknesses and provide some suggestions for further reading.

To fully understand Shadle's purpose for this book, it must be noted that he focuses specifically on 19th-century American symphonies and symphonists. Yet, Shadle does not claim that this book is a complete review of all those who fit even this narrow category; rather he makes it clear that, because of the amount of repertoire, he "had to make difficult choices about whose music to include."1Douglas W. Shadle, Orchestrating the Nation: The Nineteenth-Century American Symphonic Enterprise (New York: Oxford University Press, 2016), 6. Since he writes chronologically, his three main themes are about creating an American musical identity, the effect(s) of German musical traditions on this identity, and the transformation over time of certain entities which seemed to shape cultural opinions as to which music would thrive—or not—and why. Most of the book's chapters each focus on a single composer's history and the symphonies he/she composed.

Shadle's main arguments can be summarized as follows:

The companion website associated with the book is a most helpful and important resource. It can be found at http://global.oup.com/us/orchestratingthenation/ and it contains clips of various lengths of some of the musical works cited within the text. Its purpose is to provide fully-orchestrated listening examples of those works, which is especially insightful since the analyses in the text are often shown only with simplified piano reductions. If a reader or listener has the same experience I had in using the website, their interest will pique further and their curiosity expand so that, hopefully, they will be motivated to study these works in their entirety. Sadly, works considered to be lost are not included in the website, even though there may be analyses in the text of such pieces. In some cases, the site includes more than one recording of the same excerpt of the same piece, performed by different orchestras with different conductors. This allows for a variety of interpretations and also demonstrates who has recorded these works in recent years.

ASSESSMENT OF THE AUTHOR'S WORK

This book is a valuable contribution to the field of knowledge, particularly concerning 19th-Century American symphonies. Shadle has done well to introduce the reader to names and pieces that are largely unknown and therefore hardly performed today. His list in the beginning identifies many more composers than he spends time discussing in the book, and he yet mentions there are many others who could have been included.2Ibid., 2-3. This serves to whet the reader's appetite for further study. As an orchestral conductor, I am persuaded to seek out these works as possible program material for future concerts I might conduct. Such works would probably have to be carefully programmed so as to showcase them properly, but I agree with Shadle's point that we would all learn a lot "if only we listen."3Ibid., 277.

Shadle's analyses and comparisons to 19th-century German symphonic music is impressive. Just by examining the scores, it can be readily seen how 19th-century American symphonists were influenced by that stronghold of musical style. Certainly, the listening examples in the website help too. If I did not know I was listening to or studying American music, I might draw the same initial conclusion: this music must have been penned by Beethoven, Brahms, Schubert, or Mendelssohn. This discussion includes all aspects of orchestral and formal composition techniques such as treatment of melodies/thematic content, key relations, orchestration, duration, program music versus absolute music, etc.

Shadle also brilliantly debunks at least two major myths about American music of the 19th-century. The first is that the famous American conductor Theodore Thomas was a champion of American composers and their music. While Thomas may have permitted the premieres of such works in his programs, they were rarely ever heard under his baton again. The second myth is the widely-accepted view that Dvořák was the first composer to write a symphony based on what he called "Negro melodies" or perhaps Native American folk tunes. He thought that music to be "the real foundation of any serious and original school of composition to be developed in the United States."4Ibid., 246. Shadle's research indicates that this technique was already tried before Dvořák penned the "New World" Symphony, and thus he should not be considered as the first composer to do so. Rather, George Frederick Bristow's Arcadian Symphony seems to have made that first attempt.5Ibid, 248.

The final noteworthy point of the book comes from these two statements: "The beauty of the music described in this book, I think, lies in the fact that one can hear just about anything in it one wants. Everyone else certainly has…One lesson of this book is that the experience of music reflects the listener as much as the composer."6Ibid., 277. Shadle emphasizes not only the power and importance of listening, but also that listeners must be allowed to do so. If audiences are not able to continue listening - even repeatedly, if necessary - to pieces of music because they have already been tossed into the proverbial trash can right out of the starting gate by others who deem themselves to be the sole judges of what is good or bad, the result could be that future audiences will just accept that judgement call as the norm. Thus, history is made or broken by the hands of a few instead of allowing others to think for themselves. Shadle has some wonderful rhetorical questions near the end of the book on page 276 about how things could have been significantly different if the wheels of time had turned on other axles.

Although this is certainly a strong, informative, and well-written book, there are some flaws in it, in my view.

First, I understand that Shadle focused on only the 19th-century in his recitation of American symphonists and their works, at least the few he emphasized in the text. Still, I would like to know which composer(s), if any, Shadle thought continued the American symphonic enterprise into the 20th century. Perhaps he did not think anyone really did; certainly he does not seem to think it was either Copland or Bernstein. In hindsight, these two composers spoke according to what they understood to be the challenge at that time, but now we see more clearly in the present day how one could consider their views to be shallow. In fairness to them and to Shadle, neither Copland nor Bernstein are necessarily recognized first and foremost as composers of symphonies, although they each wrote a few. It may be that, in Shadle's view, there are no real American symphonists to speak of anymore, or that perhaps the form of the symphony has not really progressed much in 20th_century America. He is silent on these points.

Second, since Shadle says that Copland and Bernstein were incorrect in trying to solve the problem by creating "American-sounding" music, I wish he would have discussed, even a little, another 20th century event that changed everything about American music: the introduction of jazz into symphonic compositions. Shadle does not discuss this either, again, probably because it is beyond the scope of his timeline. Of course, it could also be argued that jazz was nothing more than a conglomeration of other styles from other countries that found its way into America and then blossomed here as its own style, which may or may not have had anything to do with American symphonies until composers deliberately tried to make it so. Yet, jazz certainly changed the symphonic landscape, and it would be nice to know Shadle's thoughts on that.

Third, the area of judging the quality of music is always highly subjective. I hope Shadle does not think that only audiences of the general public are entitled to have opinions. The fact is that everyone is entitled, but some people's views will always carry more weight than others. I do applaud Shadle for his honesty, however. It all boils down to two questions we must answer: 1) Do we like what we hear, and 2) Are we willing to listen and give a chance to other composers and other kinds of music before we shun them completely?

More people - especially Americans when it comes to American music - need to be willing to do more listening before they reject new music out-of-hand. The big discussion in Orchestrating the Nation about the influence of Beethoven's symphonies over 19th-century American symphonists reminds me of something once said by JoAnn Falletta: "Could Beethoven have really written his Ninth Symphony, if he could never get performances for the other eight? I don't think so . . . if we don't perform American music, eventually we're not going to have a valid music at all in this country because we're not allowing composers to develop. It's like any other art form - it has to develop."7"Conductor JoAnn Falletta: A Conversation with Bruce Duffie," accessed November 7, 2017, http://www.bruceduffie.com/falletta.html.

As listeners, that development begins - and can also end -- with us. So, let's keep listening!

Dr. Richard Wright is the Academic Chair of Music and the Orchestra Director at Suffolk County Community College on Long Island, New York, where he has taught since 2002.  He conducts the Bay Area Symphony Orchestra in Bayport, NY, and is a frequent guest conductor of local orchestras and festivals.