When the World Stopped to Listen: Van Cliburn’s Cold War Triumph and Its Aftermath, by Stuart Isacoff

When the World Stopped to Listen: Van Cliburn’s Cold War Triumph and Its Aftermath. 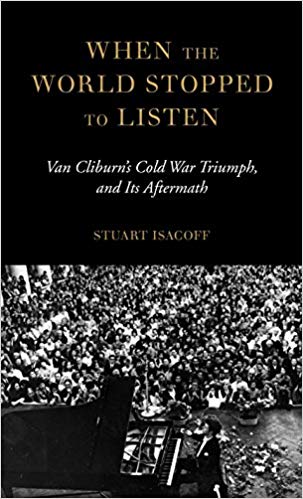 In the summer of 1957, as an aspiring piano student of not quite sixteen, I got my first sense of competition when I went to Aspen Summer Music School, in those days sometimes called “Juilliard West.” There, I joined the summer studio of Juilliard teacher Rosina Lhevinne, and experienced studying in the great Russian tradition. With roommates Tong-Il Han, who at fifteen had already played with the New York Philharmonic, and James Levine, who at about the same age had some twenty-five operas already committed to memory, it was all I could to keep my head above water.

Han and Levine were also working with Lhevinne in New York, and they described a “tall Texan” named Van who was also studying with Lhevinne there, and who had a small but burgeoning career. By the next summer, the whole world would know his name, splashed as it was on the front page of newspapers all over the country and around the globe. For, in April of 1958, that “tall Texan,” Van Cliburn, had won the first international Tchaikovsky Competition and had become something of a national hero —the only classical music performer ever to be given a ticker-tape parade down Broadway in New York. It is that extraordinary moment in musical history and its impact on the geo-political landscape of the world that Stuart Isacoff documents so remarkably in his 2017 book, When The World Stopped to Listen: Van Cliburn’s Cold World Triumph and Its Aftermath, a book that anyone interested in the world of piano, whether professional or amateur, will find engrossing and illuminating.

Now, with over 700 international piano competitions, and some 300 taking place annually, it is hard to remember a time when there were just a handful world-wide. The first such competition was the Anton Rubinstein Prize, established in 1890, but by the 1950s there were still barely twenty-five. Today, emerging young artists assume that winning a competition is a necessary step toward establishing a career; and in an increasingly crowded field with the number of talented pianists growing annually, there may be truth to that assumption. Yet two of today’s superstars, Yuja Wang and Lang Lang, established their careers without competition credits. The reality is that with the proliferation of piano competitions, even garnering prizes is no guarantee of stardom. Since the launching of the Van Cliburn Competition in 1962, for example, only that year’s winner, Radu Lupu, established a truly stellar international career. And since 2001, only Olga Kern (who tied for first place that year) has carved out strong name recognition for herself; and yet even she does not play regularly with the major orchestras.

Whether some other way of discovering and promoting new talent can emerge is an open question. Some international pianists, Andres Schiff, for example, have taken on emerging talents they discover in master classes, promoting them to managers and conductors, side-stepping the competition route completely.

Still each year, hundreds if not thousands of aspiring pianists tie their fates to the hope of a competition prize. It is worth remembering that Cliburn had already won some competitions including the Leventritt and had a management contract with Columbia Artists and a minor performing career when his teacher Lhevinne and Mark Schubart, the Dean of Juilliard, urged him to enter the new Tchaikovsky Competition that was being launched as a Soviet cultural counterpart to the launch of Sputnik in 1957. Coming on the heels of that momentous scientific accomplishment, the new piano competition, to be held in April of 1958. was meant to signal to the world the artistic stature of the Soviet Union.

Isacoff deftly describes the preparations for the competition and provides background on not only the other competitors (who included Americans Daniel Pollack and Jerome Lowenthal, Russian pianist Lev Vlasenko, French pianist Evelyne Crochet, and the Chinese Liu Shikun) but also about the all-star jury members (including Emil Gilels, Sviatoslav Richter, British conductor Sir Arthur Bliss, and composer Dmitry Kabalevsky). There was no American on the jury, and, clearly, the expectation in this cold war, post-Sputnik year was that a Russian would take the first prize.

But as the competition went on, day after day, Cliburn emerged not only as a crowd favorite, but by the final round, the overwhelming choice of the jury. Ultimately, it was Khrushchev himself who had to give the okay for an American to win. The impact was immediate and pervasive — the beginning of a cultural thaw that saw a major escalation in cultural exchanges and a diminishing of tensions between the US and the Soviet Union.

Isacoff’s account is no mere celebrity bio. It is hard to imagine a more assiduously researched book, not surprising from an author whose previous book, A Natural History of the Piano (Knopf, 2011), demonstrated a deep and comprehensive knowledge of the world of piano, past and present. With that knowledge at hand, Isacoff brings historical perspective to his tale, discussing, among many other historical references, past pianistic rivalries: Mozart and Clementi, Liszt and Thalberg, Schnabel and Paderewski, Horowitz and Rubinstein. And yet, scholarly as it is, Isacoff brings a novelist’s command of language to the task, starting with the first paragraph:

The crowds grew daily in front of the Moscow Conservatory of Music: workmen in the fur hats; matriarchs draped in black coats and scarves; teenage girls clutching bundles of flowers and shivering in the crisp air. A haze of chilled breath covered those who gathered, like fine dust. Clouds hovered overhead, lending a bleak cast to the setting. It was April, when the patches of ice on Moscow’s streets usually give way to the spring sun, as tender blades rise up from beneath the ground’s frozen surface. In 1958, though, the ghost of winter lingered on.

While the focus of the book is on the competition and all that surrounded and preceded it, Isacoff devotes much discussion to what followed: the enormous pressure on Cliburn from his instant and unprecedented celebrity and its impact on the rest of his life. Appropriately, the last chapter looks to the future, discussing what happened to the other competitors—most notably Chinese pianist Liu Shikun. After being catapulted to fame like Cliburn, he became a victim of the Cultural Revolution in China, humiliated and imprisoned, his career destroyed. When the political climate finally changed and he was released, Liu managed to rebuild his career and went on to found “more than a hundred [music] schools in over thirty cities” (254), thus spawning an explosion of musical talent in China, a surge that is virtually saving the art of Western classical music. Like Cliburn, with the establishment of a competition bearing his name, Liu saw that the most important thing was not his career, but the future careers of others.

Victor Rosenbaum has an international career as pianist and teacher, was Director of the Longy School of Music from 1985 to 2001 and is a long-time member of the New England Conservatory faculty and the former Chair of its Piano Department.