Harmony in Chopin, by David Damschroder 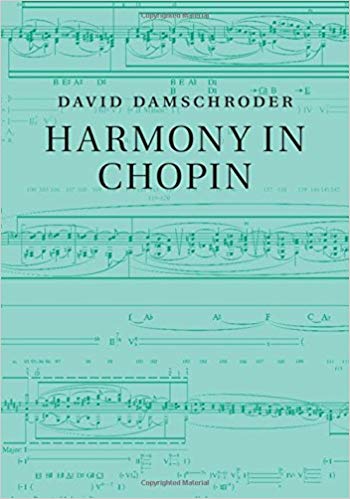 David Damschroder’s Harmony in Chopin is a recent addition to his six-volume collection of monographs on harmony through 1850. Prefaced by his remarkable book, Thinking About Harmony (2010)—which takes an historically-informed perspective—this collection is comprised of focused studies of tonal structure and harmony in the works of Haydn and Mozart (2014), Schubert (2014), Beethoven (2016), Chopin (2015), and Mendelssohn and Schumann (2017). Further planned volumes include a second set to be prefaced by Thinking About Harmony II, which will focus on harmonic developments after 1850 and extend through the early twentieth century. Composers to be highlighted include Verdi, Brahms, Liszt, Wagner, Mahler, and Debussy.

The present volume is a complete exegesis of Chopin’s harmonic procedures, presented in voice-leading graphs with commentary. Damschroder’s primary methodology is reductive, stripping away surface ornamentation to reveal more structural harmonic events. In his preface, Damschroder suggests that a prerequisite for gaining the maximum insight this study affords is “a semester’s study of Schenkerian analysis” (vii). In each of his analyses, Damschroder “provide[s] numerous detailed Schenkerian graphs” although “the Roman numerals and other symbols below the music notation [are] the principal focus of [his] attention” (vii). The soundness of this method is unquestioned, as the analytical methodology developed by Heinrich Schenker (1868-1935) is the most sophisticated conception we have for tonal music, with no seriously competing rivals. In the remainder of his preface, Danschroder lays out his conventions of analytical notation; this section is crucial for understanding his analyses. Damschroder then elaborates on his philosophy of analysis, namely that “imaginative thinking should play a vital role ... since the notes in the score often do not fully convey a work’s structure” and that “elements of a musical story may be hinted at though not explicitly stated in a composition” (viii). This is a beautiful way into Schenker’s conception of implied tones and retrospective interpretation of harmonic events; it establishes an over-arching philosophy that tonality is best understood as drama with setting, conflict, and even irony and role-reversals, enlivening our experience of a piece of music.

Damschroder uses Chopin’s mazurkas—each a quirky little masterpiece—to demonstrate his approach. In the first three chapters, he presents “probing yet concise analyses of all forty-three mazurkas that Chopin published during his lifetime” (vii).  This analysis begins by separating the works according to background structure—what Damschroder calls “tonic pillars”—which is to say, the way in which they initially establish their tonality. The first twenty-three mazurkas, discussed in Chapters 1 and 2, illustrate “regular” tonic pillars according to one of five designs: uninterrupted third-progressions, uninterrupted fifth-progressions, interrupted third-progressions, interrupted fifth-progressions, and “exceptional cases” (tonic pillars that “distinguish themselves...either through their internal ternary form or through an initial statement that seems to lack forward momentum” (31). These paradigms will be familiar to all who have even a cursory knowledge of Schenker’s principles. Damschroder presents a comprehensive foreground graph of each mazurka, accompanied by commentary on salient features. Chapter 3 discusses mazurkas illustrating “irregular” tonic pillars (those that do not conclude with a perfect-authentic cadence in the tonic key). Typically, these will close on the dominant (I-V) or mediant (I-III) or with an imperfect-authentic cadence on the tonic (scale degree 3 or 5 in the upper voice). Tonal structures investigated include: (1) a tonic pillar concluding with an IAC in op. 17/1; (2) the immediate restoration of I after a I-V tonic pillar in opp. 7/3, 30/1, 30/4, 63/1, and no. 42A WoO; (3) other contexts for I-V tonic pillars in op. 6/3, 24/1, 50/3; (4) contexts for the I-III tonic pillar in opp. 41/2, 41/3, 59/2, and 59/3; and (5) idiosyncratic tonal pillar contexts in opp. 33/4, 56/3, and 59/1. These analyses, concludes Damschroder,

provide compelling evidence that, despite the extraordinary richness and diversity on display in these tonic pillars, Chopin’s compositional style depends to a large extent upon mixing and matching a finite range of structural devices, all designed to perform specific roles within either broad or local traversals of harmonic progressions from the tonic through the dominant back to the tonic, as support for descending third- or fifth-progressions from the Kopfton to the tonic pitch (41).

The second section of the book is the most instructive: after his analyses of the mazurkas, Damschroder devotes the remainder of the book to analyses of other masterpieces, taking published analyses as a starting point for discussion. He allows “the reader [to] juxtapose [his/her] interpretations with alternative viewpoints and, with [his] guidance, explore the differences” (ix), thereby demonstrating that there may be various equally compelling readings of a work reaching different conclusions. Damschroder’s “ground rules” for his comparative analyses are: (1) ”I will devote only one chapter to each within my set of books about music before 1850”; (2) “only analysts whose outcomes significantly contrast mine (even if we share similar methodologies) will be the focus of a chapter”; and (3) “I must hold a neutral relationship with another analyst in order to write candidly about his or her work” (ix). Discussed in this section are the following works and analyses: Etude in C Minor, op. 10/12 (Graham Phipps); Nocturne in C Minor, op. 27/2 (Felix Salzer); Preludes in E Major and E Minor, op. 28/9, 4 (Fred Lerdahl); Prelude in G Minor, op. 28/22 (Alison Hood); Prelude in C Minor, op. 45 (Jean-Jacques Eigeldinger and Charles J. Smith); Ballade in F Minor, op. 52 (Edward Laufer); and Barcarolle in F Major, op. 60 (John Rink).

With this volume, Danschroder further solidifies his reputation as one of the pre-eminent proponents of Schenker’s approach. His audience includes “anyone who both especially enjoys listening to or performing Chopin’s music and concurrently possesses an interest and facility in the analysis of tonal music” (vii). This book belongs, especially, on the shelves of pianists, that it may inform their interpretations; musicologists, that it may inform their understanding of Chopin’s creative use of harmony; and theorists, that they may find in it a model for critical engagement with the literature and for writing about harmonic relationships.

Benjamin Ayotte received his PhD in Music Theory from Michigan State University with a dissertation on the use of Auxiliary Cadence technique in Schenker’s early vocal compositions. Ayotte is an independent scholar, music publisher, and freelance music engraver and author of Heinrich Schenker: A Guide to Research (Routledge, 2004).