The Bat Swings! is an ambitious and entertaining concept album that captures the groovy essence of the 1960’s hit TV show Batman and combines it with modern and nostalgic arrangements. Released in March of 2018, The Bat Swings! is a clever project that gravitates between the twin poles of sophistication (a cool Jobim-style bossa nova) and kitsch (a hyperkinetic tongue-in-cheek underscore with hints of Austin Powers). Musical Director/Producer Jeff Rupert brings together an intergenerational mix of young talent from the halls of the University of Central Florida and veteran writers who know how to make a band sound great while wringing every last ounce of excitement out of the familiar material. 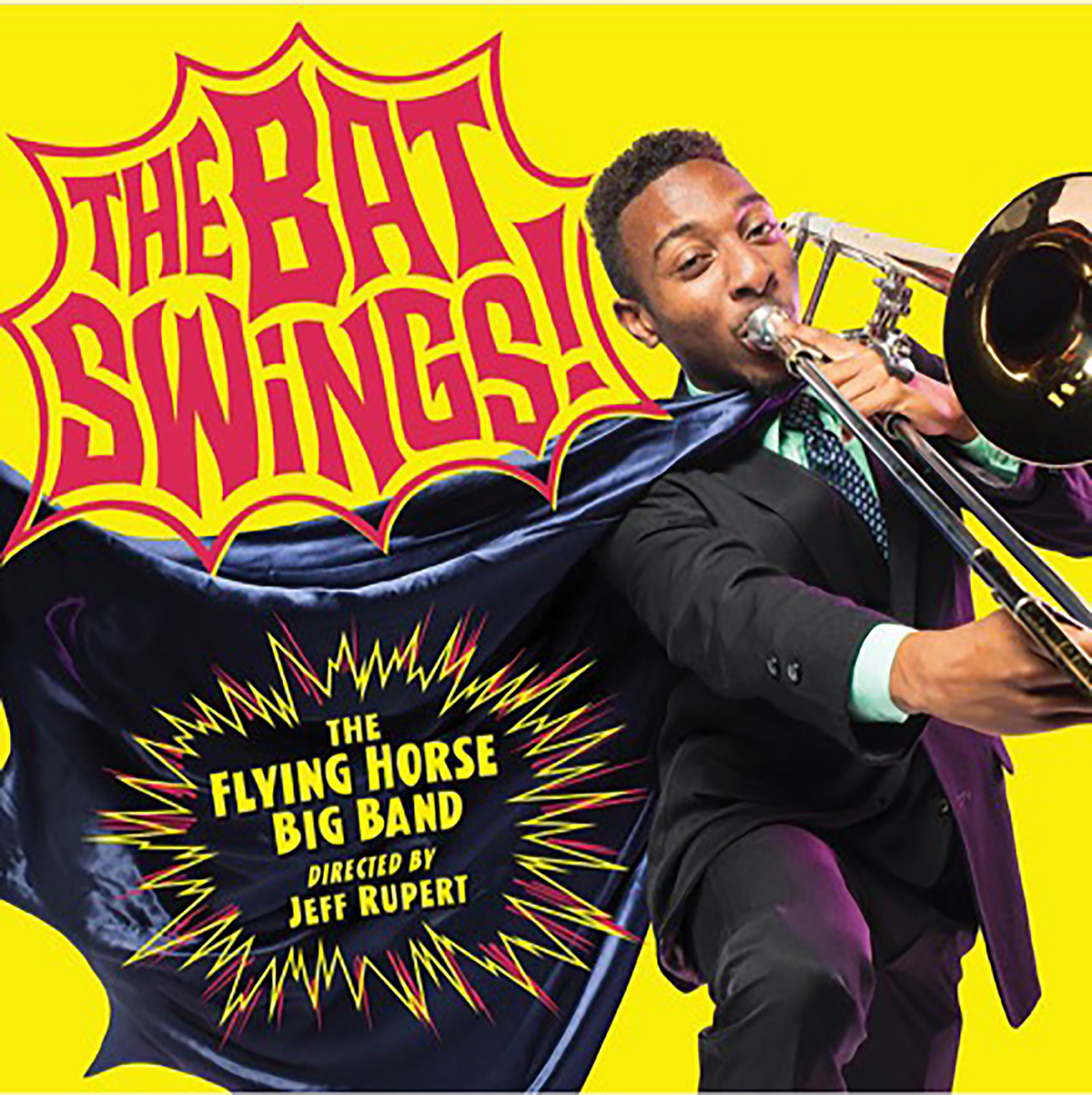 The mainstays of the record are new arrangements and compositions written especially for the recording by Mark Taylor and Michael Mossman—two of the most prominent arrangers in the field of jazz ensemble writing of the past 30 plus years. Veteran reedmen Harry Allen and Jeff Rupert are joined by Per Danielson in writing the remainder of the charts, all of which contribute wonderfully to the overall sound and vibe of the album.

For their thematic inspirations, the arrangers have gone straight to the source: themes, underscores, musical cues, and incidental music from the pens of the legendary Nelson Riddle and Neal Hefti. Drawing from the wellspring of thematic and orchestrational techniques of these original masters of the TV genre, the writers on The Bat Swings! project have produced a continuous thematic musical tapestry while giving the soloists and band an unhurried, rich harmonic and rhythmic setting in which to stretch out. The result is both artistically satisfying and highly listenable.

Contemporary jazz artists, composers, and arrangers are faced with the continual challenge of creating works that push the genre forward while maintaining a foothold in “the familiar” that can engage an audience. This never-ending search for, and integration of, new source material and inspiration has always been a driving force in jazz music’s evolution. The Bat Swings! is a great example of what a creative approach to this challenge sounds like when it succeeds.

The Bat Swings! is the fifth album from The Flying Horse Big Band, comprised of students from the University of Central Florida Jazz Studies Program. All proceeds benefit the students in the program. Their previous album, Big Man on Campus (2017), was successful on the top three national jazz airplay charts, reaching number 7 on the North American College and Community Radio chart, number 9 on the Roots Music Report, and number 36 on JazzWeek.

Track Listing from the Liner Notes:

“Batmobile to Airport” arranged by Mike Mossman, captures the cool/geek syzygy of the series. Batman traveled in style, by Batboat, Batcopter, or the most stunning car ever designed, the Batmobile!

“Riddle Me This” was Frank Gorshin’s catchphrase as the Riddler. Mark Taylor captures ‘60s flair with modern sensibility in his arrangement on track three.

“Batman Blues” is arranged by Harry Allen. Even crime-fighting heroes get the blues.

“The Spider-Man Theme.” Spider-Man has an unusual, existential bent and appeals to many Batman fans. His classic theme epitomized the swing of ’60s superheroes.

“Catwoman” is Batman’s great nemesis, yet her alias was his most beguiling love interest. Harry Allen arranges a programmatic version of “Kitka,” leading us through Batman’s infatuation and disdain for the feline femme fatale.

“Holy-Hole-in-the-Doughnut,” arranged by Per Danieilson, is a piece from the ’66 Batman TV soundtrack. It’s an odd pairing: a sensual bossa nova overdubbed with Robin’s quirky sayings, including “Holy Flypaper” and “Leaping Lumbago.”

“Murciélago En La Cueva” is arranged and conceived by Mike Mossman, featuring various cues from the Batman series. He adds an Afro-Cuban flair, while evoking fight scenes and other dramatic moments. It culminates in the “Bat-Spin” motif followed by Hefti’s “Batman Theme.” The track’s title translates as “bat in the cave,” also slang for a common nasal obstruction.