Ableton Live, which is currently in version 10, was developed as one of the first digital audio workstations (DAWs) with a non-linear sequencing environment. Other early full-featured DAWs such as Logic, Sonar or even Garageband, were developed with user interfaces that reflected the beginning-to-end tracking workflow of a tape-based recording studio. This was sensible for producers and engineers who were making the transition from analog equipment to the first digital music creative tools and software.

Instead of thinking of a computer as simply a digital tape recorder, however, today’s music producers, DJs and performing artists use technology as a real-time, flexible performance platform; they collect musical material so that they can create music on the fly, using collected songs, loops and sampled sounds. Thinking this way about a creative technology tool can also be inspiring for music educators.

The modular workflow of Ableton can be more welcoming and intuitive than other DAWs. Instead of tracks—where musical input must be recorded (sequenced) and edited from beginning to end—the user can create smaller “slots” of sequenced musical material to assemble later or simply to play with and improvise. This “building block” approach makes Ableton very accessible to beginners, and can facilitate the production of more extended musical accompaniments and original teaching materials as the student achieves more fluency.

In a recent class in our curriculum for music education majors (Music Technology Methods), the units on sequencing were taught using basic features of Ableton software. 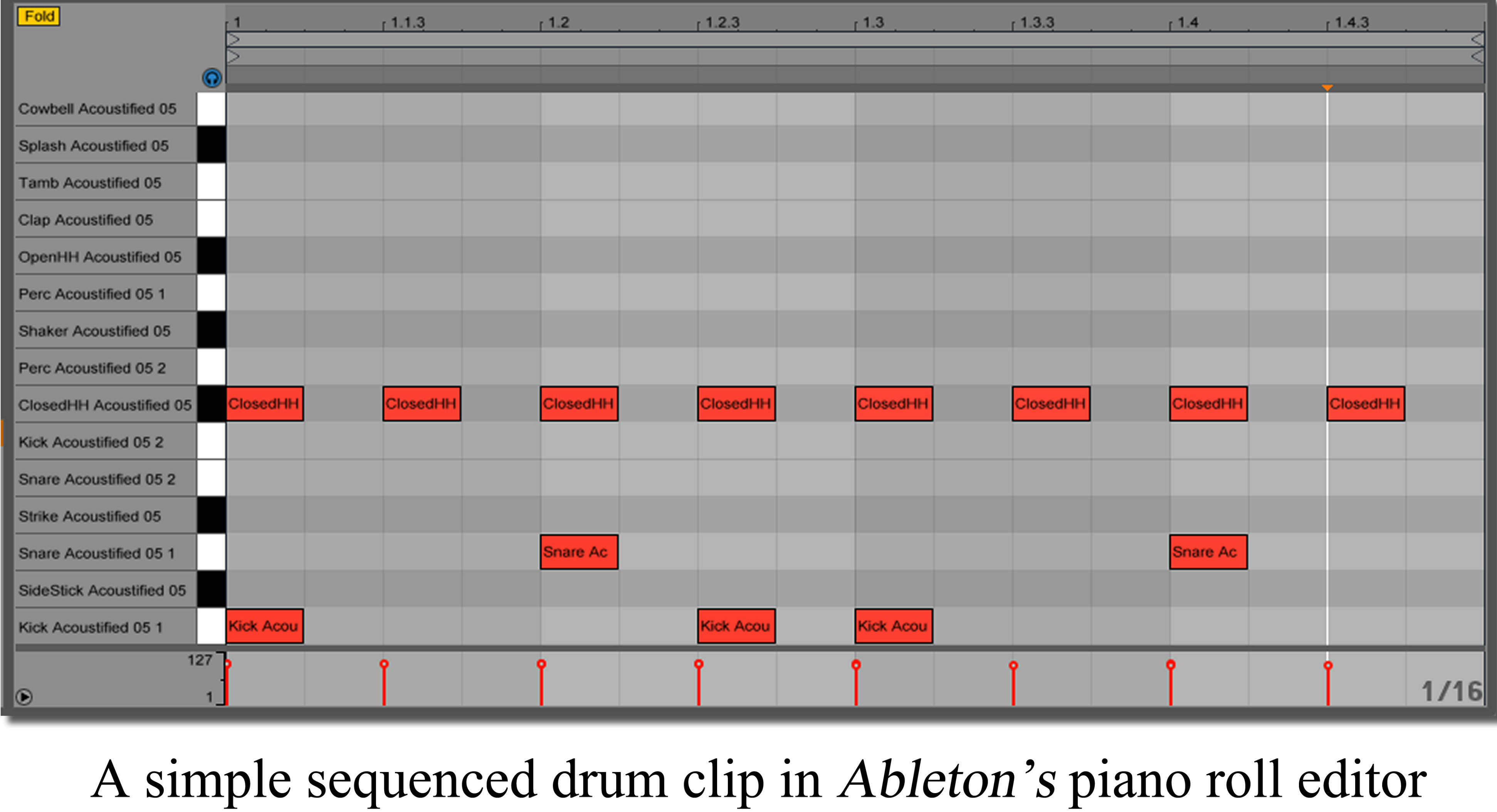 The simplest unit of music in session view is called a clip, which the user can create through live recording using a MIDI keyboard or controller input, or by drawing notes on a musical grid. Editing musical events happens in a piano roll style interface with the black and white keys of the piano represented by lighter and darker stripes as a background. When creating/editing percussion clips, the several notes or samples of the drum kit are assigned to individual MIDI notes. The students’ first creative task was simply to generate a drum groove in an empty clip by drawing the notes on the piano roll grid, which organizes the horizontal space rhythmically in beats, subdivisions and measures. During playback, enabled clips loop by default, and remain quickly editable. This is an engaging workflow for building up rhythmic and harmonic ideas intuitively and provides instant musical feedback when the user makes an adjustment or addition to a rhythmic idea.

In a later assignment, students created Orff-style arrangements of a simple folk melody, “Trot, Pony, Trot,” with three different melodic and accompaniment clips that could be played back in an additive fashion. The idea was to keep the material simple enough that the parts could be taught by rote or by referencing the simple graphic representations of the piano roll clips. Only minimal sequencing skills are required for a basic lesson plan such as this, but it is sufficient for an elementary music educator to understand some of the possibilities for using technology to create original teaching materials.

The current version of Ableton Live 10’s “Introduction” package can be purchased in an open seat license for primary or secondary schools at a reasonable price ($1200 covers all installations). Many university music labs already invest in the platform for more in-depth music technology offerings, which could make it an ideal addition to an introductory music tech curriculum for educators, alongside stalwarts like GarageBand. This pricing also keeps Live’s “Intro” well within the range of a technology grant for implementation in a school lab. The non-linear sequencing environment is very inviting and creative, but the interface does not include notation—think of it as a feature and not necessarily a deficit. Another fun feature is Link, which allows you to synchronize multiple workstations, iPads or other link-enabled devices to a single tempo: great for exploring live improvisation using your lab’s MIDI controllers and your students’ phones!

Damon Sink is Associate Professor of Commercial and Electronic Music at Western Carolina University where he teaches courses in MIDI, synthesis, and recording arts, and co-directs the Music Technology and Fusion Ensembles. He is a graduate of the Cincinnati College-Conservatory of Music, where he studied composition with Joel Hoffman, and Samuel Adler. Recent recording projects include “Through Their Eyes” by Cherokee flutist, Matthew Tooni (2016), and Smoky Mountain Brass Quintet (2019).