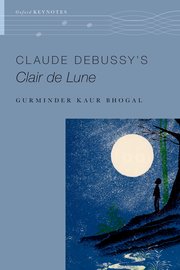 Debussy’s Clair de lune in D-flat major has to be one of the all-time-most-popular pieces of salon music, found in piano benches throughout the world, although not many remember that it is but one movement of four in the Suite bergamasque for piano, composed in 1890 and seldom heard as a totality. The other three movements are modern reincarnations of those in a Baroque suite—Prélude, Menuet, Passepied—but Clair de lune is the only piece in the set with a descriptive title. This little “Keynotes” guidebook is an outstanding example of current analysis and criticism of Debussy’s pathbreaking music which, a century after his death, still remains more loved and respected than well-understood; thanks to books like this, intended for the lay musician no less than the professional, that state of understanding is now improving.

Debussy would have been dismayed to see Clair de lune turn into his best-known musical composition, but an adoring public has decided differently. The piece even rose to iconic status in the entertainment world after the Second World War. How this happened still remains difficult to fathom, but it is an element of cultural interest in this book’s Chapter 2, “Resonances of Clair de lune.” Here, Bhogal takes note of the appearance of Clair de lune as a recognizable prop or suggestive background in the movies, in commercial advertising (as for MacDonald’s hamburgers, with the music mickey-moused to syllables of text crawling across the screen), even in video games.

Chapter 3 surveys the complicated history of Debussy’s Suite bergamasque in both its composition and publication. It is a fair guess that Clair de lune was composed in 1890 at the time of the other movements in the suite, and possibly contemporary with the Nocturne in D flat major which shows some parallels with Clair de lune. The original score has not survived; the date of 1890 is on the authority of the composer, who added it to the initial publication in 1905. Debussy would in fact have preferred not to have published the suite at all, but in 1905, following the premature death of his sponsor Georges Hartmann, he could not prevent Hartmann’s heirs from offering it to their preferred firm of Fromont as part of a claim for repayment of money advanced to him by Hartmann.

Chapter 4, “Poetry, Art, and Music,” offers a basic structural and tonal analysis of Clair de lune, which, like so many of Debussy’s compositions large and small, is essentially a three-part form. Bhogal points to significant parallels  with the other movements of the suite, as well as other works, especially songs, that Debussy composed around the same time. This chapter includes a careful examination of “Clair de lune” by Paul Verlaine, the poet whose different texts Debussy chose for setting more often than any other’s. Debussy actually set this text twice, in quite different but related versions in 1882 and 1890, as did Gabriel Fauré around the same time. The Verlaine connection is complex, and includes direct parallels with commedia dell’arte (think of the folksong “Au clair de la lune / Mon ami Pierrot,” which also forms the basis of a Debussy song from as early as 1882); Debussy’s first series of Fêtes galantes, three songs of 1890 on Verlaine texts, includes “Clair de lune” as its third song, and “Fantoches” (with central role of “masques et bergamasques”) as the second. Another revealing connection is what was originally planned for the third movement of Suite bergamasque: “Promenade sentimentale,” which is also the title of another Verlaine poem.

Chapter 4 involves mostly literary analysis, but it and Chapter 5, “Pierrot and the Moon,” both explore poetic connections with the visual arts in gratifying detail. Works discussed include Watteau’s strikingly foreshortened portrait of a Pierrot in bright white costume as though lit by a spotlight, and Aubrey Beardsley’s creepy moonlit graphic from a “Salome” series (with Oscar Wilde’s slant-eyed gaze as the “Woman in the moon”), as well as a woodcut by Félix Vallotton and a haunting Japanese print from 1862. These illustrations and others also appear in full color on the book’s companion website. The website is well equipped with recorded examples as well, including sound clips from cinema and television—a couple of those are no longer operative, for licensing reasons—and a complete “Chanson triste” (“Le matelot qui tombe à l’eau,” L. 24), Debussy’s beautiful short song from 1881.

Clair de lune is not Debussy’s greatest work; it is not even his dreamiest nocturne. But Clair de lune, the iconic piano piece, accepted in consideration with Debussy’s songs of the same title, offers a psychological portal to some of the most important crosscurrents of Debussy’s developing aesthetic and compositional thought. Those who confront Debussy’s art for the first time or the hundredth will be cheered on their way by such a thoughtful and interesting book as this one.