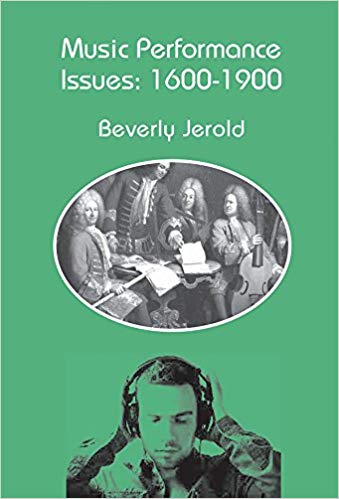 Beverly Jerold’s Music Performance Issues: 1600-1900 is an informative source for graduate students, conductors, scholars, performers, or anyone interested in learning more about musical performances from several hundred years ago. The book includes nineteen chapters, organized by topic. Most of these topics have been previously explored by the author in other publications. The author addresses definitions of terms, intonation issues, vocal and instrumental practices, the challenges of rhythm and beat keeping, early experiences with the metronome, the meanings of particular score indications, vibrato, and more. Although her writing is informed by rigorous research, Jerold’s style is engaging, easy to follow, and often anecdotal. Each chapter is approximately twenty pages. Chapters may be read one or two at a time, in any order, at the reader’s convenience, or the book may be read cover to cover in a relatively short amount of time.

To compile this work, Jerold examined letters, scores, rosters of musicians, concert programs, manuals, and other sources from several European countries to understand what musical performances were like in the years leading up to the twentieth century. Early in the book, she tells the reader that all previous thoughts of how early music had been performed may be only “a pipedream” (p. 31).   She then presents arguments that support this statement, making the reader feel empathy for early composers who worked with musicians of a lower caliber than those who perform today. For example, according to Jerold, J. S. Bach himself may have performed parts written for other instruments because they were too difficult for the musicians he hired (p. 40). Early singing may have been so unpleasant that some composers used organs to cover the voices (p. 59), and although the metronome was a helpful invention for musicians, there were many problems with interpreting markings and finding appropriate tempi when it was first introduced (p. 178).

These initial claims are just the beginning of Beverly Jerold’s inquiry concerning early musical practice. Throughout her text, Jerold presents convincing evidence that supports her conclusions about a variety of topics. She makes use of musical examples, concert programs, charts, tables, and other visual representations to support her findings. She includes issues that address important challenges of composers, vocalists, instrumentalists, and directors at the time. Her chapter about Handel and his choice of singers is particularly compelling. In it, she suggests that Handel often compensated for bad singers by writing low, loud pitches to be played on the kettledrum, covering the sound (p. 89). In the same chapter, Jerold cites the recurrence of particular names on musician rosters as evidence that Handel preferred to hire alto castrati for many of his roles (p. 81). Finally, she discusses the lack of tenor and bass voices available for hire, supporting her position that the lack of knowledge of vocal physiology at the time may have resulted in male voices being damaged during puberty (p. 91). This damage may have been due to over-singing possibly in the high register, thus making those lower voices rare.

Another interesting chapter includes Jerold’s discussion of the limitations of valveless brass instruments and how musicians might have produced notes that were not part of the harmonic series. She explains that composers often wrote based on their own instruments and had very little understanding of how these other instruments worked. The trumpet was particularly problematic. Further, despite the evidence that a lack of intonation was a recurring problem, there is very little evidence that “lipping” was a technique used to help this issue at that time (p. 148).

Although Jerold suggests how we might perform works from various time periods, her book is not instructional in nature, and ultimately, she allows the reader to decide how to use the information to inform their own musical practice. For example, in her chapter on vibrato in choral works, Jerold proposes that the vibrato so many composers disliked was not the natural singing vibrato, but a tremolo-like wobble (p. 287). Natural vibrato was highly desirable at the time, contrary to what many believe today. At the end of the chapter, Jerold gives singers permission to sing early literature with vibrato, but says that, if they choose to use a straight tone, they can do so without being historically inaccurate (p. 293).

Jerold leaves us with some important thoughts to consider as we continue to perform music from various time periods. She reminds us that modern musicians have been trained in a way that is very different from those who lived in the time of J. S. Bach. Technology has given us twenty-four-hour access to recordings, and most of us were trained with a metronome from an early age. We play on instruments that have been standardized and rarely worry about the mechanisms on our instruments breaking. We understand so much more about the human voice, instruments and their capabilities, intonation, and other musical issues. We also live in an age where musicians are specialists on one instrument, allowing for more technical facility and greater ability to perform at a high level.

To understand our music in historical context, however, it is important for us to lay aside our twenty-first-century experiences and look at life through the lens of an early musician. Jerold has helped us do that by organizing information about early musical issues into small chapters that are easy to navigate. Her work in gathering and interpreting sources is invaluable to those who perform, study, and write about this music. A small criticism is that the book does not have an accompanying recording of musical examples. This would be particularly helpful in the section where she discusses dotted rhythms. Nonetheless, Jerold has contributed to an important musical conversation and will have the reader breaking down the myths he or she has held to regarding early music and how it should be performed.

Dr. Michele Paynter Paise is the Music Program Coordinator and a member of the music faculty at Morehead State University. She regularly presents workshops focused on elementary and vocal music education. Paise currently serves on the editorial board of two music education publications, General Music Today and Music Educators Journal.