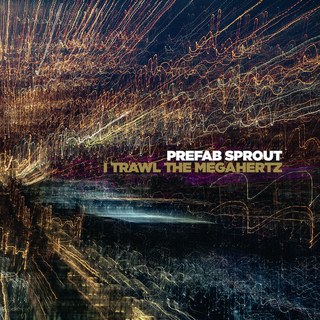 Recently re-mastered and re-released, composer Paddy McAloon’s I Trawl the Megahertz (2003), a genre-bending, 54-minute suite of nine works, serves as a meditation on loneliness, isolation, and the need in the human condition for connection across the void of existence. Conceived while McAloon was recovering from eye surgery and only able to listen to the radio, this collection of movements, three vocal and six instrumental, embraces a mixture of styles and influences, while incorporating and collaging snippets of dialogue sampled from late-night radio talk shows. The loneliness in the recorded voices, and of McAloon’s physical condition of the time, is paralleled and amplified by the focused nature of his orchestration throughout the nine compositions. A sustained, lyrical string orchestra embodies the emptiness of the radio ether in which McAloon searches for voices to eavesdrop upon, while those voices find their representation in an ever-resurfacing muted trumpet. These two timbres form the foundation for the entire suite, though additional instrumentation comes and goes depending on the stylistic worlds the composer inhabits work-to-work. Orchestral brass, jazz vibraphone, klezmer-like clarinet, and theremin contours all find equal footing in McAloon’s soundscape.

Taking up one third of the suite, the 22-minute title track establishes the ambient nature of much of the album. A lulling, diatonic 2-chord progression is repeated and stylistically varied throughout. Much like “The Silence of the Druids” in Charles Ives’ The Unanswered Question, the progression provides a chaconne backdrop for a rotating series of melodic fragments from the film noir-like muted trumpet and a narration of real and imagined monologues on desperation and separation (from vocalist Yvonne Conners).

McAloon maintains this stark harmonic simplicity throughout the nine works. For long-time admirers of his work (as frontman and songwriter for the 80’s pop group Prefab Sprout) this is a surprising departure from his typically angular and adventurous language. However, the harmonic limitations here resonate with the isolation of McAloon and his found-radio protagonists. The work I’m 49 comes closest to his pop-song origins, taking a more upbeat, backbeat-fueled perspective on the call-in show confessors.

McAloon lends his own singing voice to only one work on the album, embodying the forgotten persona of a homeless man in Sleeping Rough. His reassuring, lilting tenor is missed elsewhere and could have salvaged some of the more unfocused, soundtrack-like instrumental works.

A single homophonic refrain for string quartet weaves its way across multiple works (Fall From Grace, …But We Were Happy, and Orchid 7), wearing different stylistic disguises each time and interspersed with new material, recalling Michael Nyman, Maurice Ravel, Miles Davis, and Steve Reich. The amalgamation of jazz, minimalism, classical string quartet, and naked diatonicism in these three pieces doesn’t always breed rich results. However, the most engaging and ambitious composition among the instrumental works, Esprit De Corps, employs Louis Andriessen-style minimalist counterpoint to great effect, with jolting phrasal turns and a riveting energy.

In I Trawl the Megahertz, Paddy McAloon’s Rear Window view of the human need for connection is often compelling and, in rare moments, moving.

Jason Hoogerhyde, DMA, is Associate Professor of Music Theory and Composition at Southwestern University in Georgetown, TX. His works have been performed throughout North America, Europe, and Asia. Hoogerhyde has held residencies at the Ucross Foundation and the Dorland Mountain Colony and has served as Music Critic for the Cincinnati Enquirer.