Fryderyk Chopin: A Life and Times, by Alan Walker 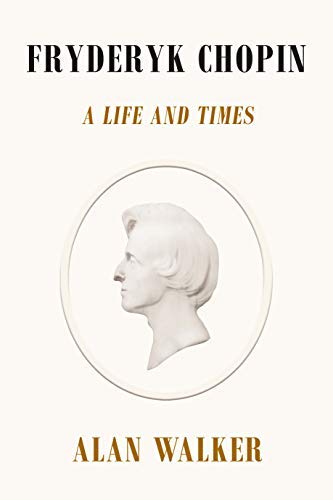 Beginning as early as 1852 with an encomium by his fellow composer Franz Liszt, Fryderyk Chopin (1810-1849) has both suffered and benefited from a century and a half of biographies that have expanded, illuminated, falsified, or even perfumed the legend with varying success, and from time to time shed light on his music. Readers in English may know several of these, including the well-written popular treatment by Herbert Weinstock (1949), as well as the more detailed elucidation by Jim Samson (Master Musicians Series, 1996) which focuses especially on the music, along with the expert documentary examination of Chopin’s correspondence by Arthur Hedley. This new book by Alan Walker, who already gave us a very good, three-volume biography of Liszt, adds profoundly to our understanding of Chopin the human personality, with all his brilliance and imagination and foibles, as psychological background to Chopin the composer and performing artist.

Much of Walker’s book builds on extensive research on Chopin’s family background, his Polish upbringing and education and the importance of Polish and Russian society in his psychology, his relationships with his many friends, and his association with other musicians; most of this research is relatively recent and indisputably authoritative. Chopin’s long and ultimately poignant liaison with George Sand (Aurore Dudevant, 1804-1876) is covered in particular depth in part because of extensively detailed sources on her life and writings published within the past thirty years. Walker’s book is very much a “Life and Times,” illustrating a fine cross-section of Parisian culture within which Chopin moved for the major portion of his mature career, and providing a well-lighted view of the historical cross-currents, including two revolutions in France and two more in Poland and Russia, that so significantly impacted his life. We learn, for instance, about how Chopin’s youthful engagement to Marie Wodzinska was broken off and how this rupture affected his music; about how Chopin originally planned to dedicate his second set of Etudes (op. 25) to Liszt (who is said to have learned the first set, op. 10, dedicated to him, in two weeks) but changed his mind and dedicated them instead to Liszt’s mistress; about Chopin’s influence from and appreciation of the Irish composer John Field, inventor of the nocturne (who spoke of Chopin’s playing as “a sickroom talent”); about how so much critical opinion of the time extolled the sensitivity of Chopin’s piano playing above that of every one of his contemporaries; about his painstaking appraisal of and preferences for the different pianos offered to him; and about the piano music of other composers (e.g., Schubert) that Chopin assigned to his students.

Another constant thread through the book is Chopin’s extraordinary capacity for improvisation, which penetrates so much of his compositional thought even when he struggled for days to perfect just small amounts of what he wrote down on paper. Some of his manuscripts reveal a battleground of indecision, yet others represent systematic and unsystematic afterthoughts in their welter of variant expression markings. “Everything he knew about piano playing he had discovered for himself,” the author says about Chopin, “[...]creating a series of compositions that broke fresh ground, that are absolutely typical of the piano, and that have dominated the repertory ever since” (241-242). It hardly needs adding that Chopin’s entire oeuvre includes a smaller proportion of inferior piano works than do the oeuvres of almost any other major composer, including Schumann and Liszt, for instance.

The beneficial influence of Chopin’s teacher Jozef Elsner (1769-1854) on his developing talent is discussed in some detail. To Elsner Chopin likely owed his absorption in Bach’s keyboard works, especially the complete Well-tempered Clavier, which Chopin could play from memory and which formed a part of his own teaching. The other profound influences were Mozart and Polish folk music. One result is that “[t]here is more counterpoint in Chopin than one might suppose,” Walker writes (247). “Many inner voices lie buried within Chopin’s textures, longing to be discovered and brought out.” This understated description may confuse the student who thinks of “counterpoint” in terms of academic exercises and Bach’s contrapuntal genres, but it accurately describes what accounts for so much of the formal and harmonic richness of Chopin’s music. Walker (247-48) cites Charles Rosen’s description of Chopin as the greatest contrapuntist since Mozart; even allowing for hyperbole, there are good enough reasons for that appreciation on nearly every page of even Chopin’s most straightforwardly homophonic textures.

In all, Walker’s expertly written and thoroughly readable book paints a broad canvas showing an abundance of detail in accounting for Chopin’s too-short, physically restricted, and often painful life that nevertheless was remarkably rich and fulfilled because of what he himself made of it. Previous accounts of Chopin’s life have not accomplished this on such a scale. In both the “life and times” and the survey of the music itself the reader of this book can also get a sense of Chopin’s legacy that the composer himself could not envision. This legacy consists of not just the heroic pianist-composers like Rachmaninoff and their own twentieth-century successors, nor the salon composers of miniatures from Brahms to Tchaikovsky to Chaminade, but also of composers like the symphonic Mahler—who breathed the air of the mountains and meadows—and Debussy, the Impressionist pianist who revered Chopin’s music above all others.