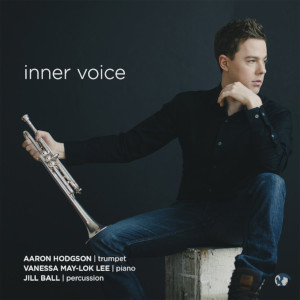 Aaron Hodgson begins his liner notes for this recording by quoting the title of a 17th-century treatise: “Method for Learning to Play the Trumpet in a Warlike Way as Well as Musically.” The music on this recording focuses primarily (but not exclusively) on the musical side of the equation. He ably demonstrates the lyric qualities of the instrument in this collection of five pieces, three of which are borrowed from non-trumpet literature. Collectively, this disc showcases a mature musicality across the range of the trumpet. When called for, Hodgson even approaches “warlike” playing, but always in a controlled manner.

The first piece, Robert Schumann’s Three Romances, was composed for oboe and piano. This arrangement is by Mario Guarneri, Rob Roy McGregor, and Gloria Cheng. Hodgson delivers beautiful long phrases and controlled melodies that give this Schumann standard a new life on the trumpet.

The other two borrowed pieces are the last two on the recording, Six Studies on English Folk Song by Ralph Vaughan Williams and Five Melodies by Sergei Prokofiev. Originally for cello and piano, the Vaughan Williams work was arranged by Hodgson. With long, sustained melodies and occasional flourishes, this is an outstanding addition to the trumpet repertoire for those seeking beautiful melodies to highlight expressive, lyrical playing.

The Prokofiev piece was composed as a vocalise – for a singer without words – and was subsequently adapted by the composer for the violin. While this version is based on the violin adaptation, the trumpet sings the lines as beautifully as any soprano. The contrast of occasional muted tone colors greatly enhances the piece.

Two of the pieces on this recording were composed for the trumpet. The second set of tracks, Jean Hubeau’s Sonate pour trompette chromatique et piano, has been performed frequently since its composition in 1996. The first movement extends the lyrical theme of the entire recording – even the fanfare-like passages in the middle of the movement are controlled and lyrical. The second movement provides more of a playful contrast to the lyricism of the first, and the performance here is a tour de force by both Hodgson and Lee: power mixed with control and musicianship. The final movement, titled Spiritual, was something of a surprise. The piano part is written with a triplet 12/8 feel through much of the movement, while the trumpet part has eighth notes with no indication that they should be swung. Many players choose to swing the trumpet part, but Hodgson gives a straight interpretation aside from a passage near the end. The contrast is truly delicious.

As a collaborator, Lee exhibits an ability to shine as well as support in her role as pianist throughout the four pieces mentioned above. She delivers an excellent performance.

The final composition (third on the CD) is a two-movement piece for trumpet and percussion by Brandon Ridenour. Music for Trumpet and Djembe was composed in 2012 and is an outstanding addition to the trumpet repertoire. The piece provides a strong contrast to the other four in the collection, at times energetic, lyrical, mournful, playful – indeed warlike and musical. The percussion work by Ball is exceptional, particularly the contrasting sounds of the second movement, which echo the contrasting sounds of muted and open trumpet in the same movement.

From this recording, it is clear that Aaron Hodgson is an outstanding trumpet voice with much to say and a mature musicianship that is delightfully engaging.

Trumpeter Aaron Hodgson received his DMA degree from Yale University and is an Associate Professor of Music at Western University in London, Ontario, Canada. His collaborators on this recording are Vanessa May-lok Lee, piano, and Jill Ball, percussion. Lee received her MM degree from the Royal Academy of Music in London and is a Faculty Accompanist at the Manhattan School of Music and The Juilliard School and serves on the piano faculty at Third Street Music School. Ball received her DMA degree from Michigan State University and is an Assistant Professor of Music at Western University.

Don Bowyer is a composer and trombonist and Dean of the School of Arts at Sunway University in Malaysia. He holds degrees from WV Wesleyan College; California State University, Northridge; and the University of Northern Colorado.