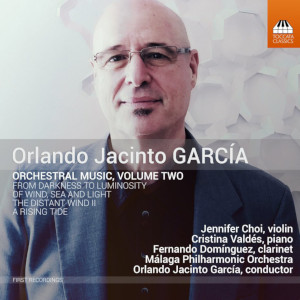 In his second volume of orchestral music, composer Orlando Jacinto Garcia reveals works inspired by nature; three concertos with orchestra for violin, piano, and clarinet; and a piece for full orchestra.

“a rising tide” for solo violin and orchestra is a lyrical and often pensive composition. The opening colors and harmonies are foreboding, moody, and increase in intensity, which is appropriate since this piece is a reflection on the impact of global warming and rising sea levels. It opens with an alternating dialog between simple, minimalist motives in the orchestra and rhapsodic and romantic lines in the violin that rise in vigor and range as the piece progresses. Multiple meters often give a feeling of openness and freedom; Garcia also makes use of extended techniques in the violin while exploring its more Romantic tendencies. The piece concludes with an extended cadenza in its last portion for the solo violin, wind chimes, and tuned wine glasses, evoking sounds of nature.

“from darkness to luminosity” alternates between bold statements in the orchestra and piano. The piano statements are starkly contrasted; some are simple and tonal, while others are strikingly atonal or aggressive. Often, the orchestral interludes are focused on splashes of color, particularly in the winds, but there is a recurring six note motive that returns several times throughout, loosely suggesting a rondo, in which the orchestra joins the piano in a rousing crescendo. The final return of this motive brings this piece to a close. As in “a rising tide,” Garcia uses extended techniques in his piano writing, such as plucking and muting strings inside the piano.

“the distant wind II” for clarinet and string orchestra opens with the clarinet soloist blowing air through the instrument against the gentle backdrop of wind chimes, again recalling nature. The instrumentation of clarinet soloist and strings immediately brings to mind the great clarinet concerto of Aaron Copland, but with nature being the primary inspiration rather than jazz. Clearly influenced by minimalism, this work is based on a three-note motive introduced in the solo clarinet, which forms its structural backbone. The solo writing is very free and rhapsodic, and while not technically demanding in terms of velocity, it explores the many colors of the clarinet, utilizing its well-known power of infinite pianissimo as well as its lyrical upper register, often approached by wide leaps. As in the other compositions on this album, Garcia utilizes extended techniques such as quarter tones and multiphonics.

“of wind, sea and light” for full orchestra recalls themes and elements from the previous three pieces and, like those pieces, opens with a rather rhythmically free sentiment, with alternating splashes of color between the winds and strings. Additionally, the solo violin and clarinet recall motives from their respective compositions. Interspersed sections of rhythmic intensity and later polyrhythms contrast provide interest and drama until the piece concludes with wind players blowing air through their instruments.

As a composer, Garcia relies heavily on minimalism and extended techniques, but also utilizes an almost romantic lyricism that beautifully displays the capabilities of all the soloists. Their performances are excellent as is the caliber of performances from the Malaga Philharmonic Orchestra, revealing works that, like the nature which inspired them, are not only thought-provoking and captivating, but provide moments of true beauty as well.

John Kurokawa is Lecturer of Clarinet at Wright State University. In addition to teaching applied clarinet, he teaches courses on woodwind chamber music, woodwind pedagogy, and music education. Additionally, he serves as principal clarinetist of the Dayton Philharmonic Orchestra and the Cincinnati Chamber Orchestra. Kurokawa performs exclusively on the Yamaha CSVR and Custom 881 Eb clarinets and is a Yamaha Performing Artist.