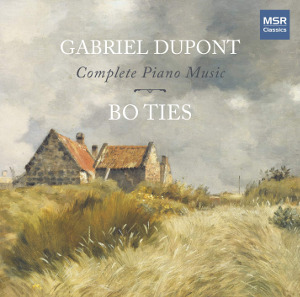 The history of Western music is dotted with brilliant creative minds whose careers were cut short by early death. The French composer Gabriel Dupont, whose life ended at the age of 36 due to tuberculosis, has for the most part been remembered as a historical footnote, one of several colleagues who stood in the way of Maurice Ravel’s ultimately futile quest to win the Prix de Rome. His own music has not yet received comparable attention despite a prolific output that includes four complete operas. Bo Ties’s new integral recording of Dupont’s compositions for piano attempts to redress the balance.

A listener who is new to Dupont’s music will glean the most accurate idea of the composer’s aesthetic by beginning with the two extended sets that date from the composer’s brief maturity, Les heures dolentes (1903) and La maison dans les dunes (1910). Perhaps the most striking quality of this music is its harmonic freshness. Though the vocabulary is firmly of the late nineteenth century, there are unexpected turns and juxtapositions, with occasional splashes of sharp dissonance and whole-tone formations. The opening piece of Les heures, Épigraphe, undercuts its stalwart rhythm with surprisingly elliptical harmony, while a dissonant ostinato provides an appropriately uneasy leitmotif for Hallucinations later in the same set. The main theme of Mon frère le Vent et ma soeur la Pluie, the fourth of the later La maison dans les dunes, anticipates Poulenc in its acerbic whimsy. Overall the ingredients are recognizably those mined by Fauré and the early Debussy and Ravel, but combined in an original and personal manner, presented in idiomatically complex pianistic textures. Melodically Dupont’s personality is less distinctive, though capable of tracing lines of haunting simplicity, as in the purely diatonic opening of the next piece, La mélancolie de bonheur (literally, “The sadness of happiness”). His emotional range spans a satisfying gamut, from poised simplicity and lyricism to grandeur. However, the lack of a unifying dramatic arc in these sets suggests that a considered selection from either would work best in concert performances.

The early collections that round out the disc, Deux airs de ballet and Feuillets d’album, reveal less personality, being dominated by style antique clichés, though not without some startling touches, such as a minuet in G minor with a central trio in E minor. The enharmonic turns in the Berceuse, the third of the Feuillets, most vividly prefigure the boldness of Dupont’s mature style.

Pianist Bo Ties plays all this music with expression and commitment. Though his technique encompasses its frequently virtuosic demands, one sometimes senses caution rather than abandonment in the more densely scored passages. To this listener’s ear he is not altogether successful in getting Dupont’s longer, discursive movements to cohere formally. Despite these minor strictures it is good to have this worthwhile music available in this new recording.

Kiyoshi Tamagawa is Professor of Music at Southwestern University (Georgetown, TX), Kiyoshi Tamagawa has appeared at Weill Hall, Merkin Hall, and Bargemusic (NY), Wigmore Hall (London), and on the Dame Myra Hess Memorial Concerts (Chicago). He is the author of Echoes from the East: The Javanese Gamelan and Its Influence on the Music of Claude Debussy.