Music for St. Cecilia’s Day: From Purcell to Handel, by Brian White 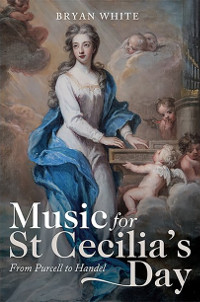 At first glance, there appears nothing enigmatic about music composed for St. Cecilia’s Day in early modern England. Henry Purcell’s Hail, Bright Cecilia and G. F. Handel’s Alexander’s Feast represent some of the most well-known non-operatic vocal works of seventeenth and eighteenth- century England. As the patron saint of music, St. Cecilia appealed naturally to composers seeking a figure who could validate their raison d’être. Yet if one probes the practice of composing music for St. Cecilia’s feast in post-Reformation England, a significant question arises: why did composers and audiences of this steadfastly Protestant kingdom invest in music that celebrated a Catholic saint? This is a central question of Bryan White’s recent book, an exploration of music for St. Cecilia’s Day from 1683 to 1739. A sweeping study of repertoire, musical activities, and the interplay of sacred and public music-making spheres, White’s book offers a significant contribution to current knowledge of Cecilian repertoire while addressing critical issues about the development of a national musical style in early modern England.

White’s study surveys the musical output of numerous composers who wrote music in honor of St. Cecilia. In addition to Purcell and Handel, readers will find encyclopedic details about the Cecilian compositions of John Blow, Giovanni Battista Draghi, Daniel Purcell, John Eccles, William Turner, Charles King, and William Boyce, among others. Purcell and Handel bookmark White’s study: Purcell’s “Welcome to all pleasures” marked the first attested celebration of St. Cecilia’s Day in London in 1683, while Handel’s 1739 A Song for St. Cecilia’s Day, 1687 signaled the final–if radiant–sunset of English interest in musical settings of Cecilian poetry. To address the development of Cecilian music between Purcell and Handel, White adopts a primarily chronological approach to his work. Chapters One through Four discuss St. Cecilia’s feast day celebrations in London between 1683 and 1700, including an analysis of religious sermons written for the celebrations. Chapter Five explores provincial celebrations of St. Cecilia’s Day, including brief yet fascinating remarks on Cecilian musical festivities in eighteenth-century Boston, MA and Charleston, SC. Finally, Chapter Six investigates the renaissance and subsequent decline of interest in Cecilian music in London in the 1730s.

Two key topics interleave with White’s overarching chronological structure: the rise of public music concerts in English cities and the development of the musical ode. White argues that it was in part London’s practice of annual public festivities that paved the way for St. Cecilia’s Day celebrations, which were masterminded by the Musical Society in London, an organization of musicians, lawyers, merchants, politicians, and other middle-class members, from 1683 to 1700. Since at least the 1650s, London hosted annual county feasts, or festivities that celebrated resident natives of specific historical counties in England with public processions, ticketed events, and other forms of entertainment. Rising organically out of a culture of public musical celebrations, St. Cecilia’s Day easily shed whatever loose religious associations it may have held. (The fifth-century saint only acquired her status as patroness of music in the mid-fifteenth century, when artists began to depict her playing an organ). Indeed, White’s analysis of sermons delivered on St. Cecilia’s Day reveals that services steered clear of doctrine, focusing instead on the benefits of using musical instruments to praise God. By contextualizing St. Cecilia’s Day in English public musical culture, White convincingly demonstrates how the feast cemented itself on the London social calendar as a festivity that celebrated music and public music-making without raising divisive issues of Protestant versus Catholic theology.

A second predominant strand that threads throughout White’s study is the history of the musical ode. This genre was a distinctly English phenomenon that originated in court and academic circles in the 1660s. White’s overview of the origins and development of the early ode is particularly helpful for those interested in gaining a solid grasp of the genre as well as for those seeking to understand how Cecilian music evolved out of the preexisting musical tradition. Composers and poets such as Purcell and John Dryden, respectively, expanded on the ode tradition in creating their Cecilian settings, enlarging the musical scope of the court ode while elevating the poetry from its function of praising English royalty to celebrating music and the English language. White’s discussion of the ways in which Cecilian composers and poets borrowed and departed from court odes enables him to examine a large amount of music and poetry in detail. Indeed, the sheer number of musical excerpts that White features in his study is one of the most valuable aspects of this book. Much of the repertoire White discusses has not been recorded in performance; the musical excerpts he includes should not only facilitate the reader’s understanding of his comparative analyses of many Cecilian works but should also inspire readers to advocate for more sound recordings and live performances of these pieces.

Since English interest in music for St. Cecilia’s Day coincided with the crystallization and dissemination of Italian and French musical styles, White’s study engages well in dialogue with broader musicological conversations on how national musical styles solidified and competed with one another in this period. Several pieces he mentions betray French or Italian influence, such as the Italianate symphony that opens Blow’s “Great choir of heaven,” performed at the Cecilian Day celebration in 1695, or the French dance rhythms that Purcell infuses into the final movement of “Welcome to all the pleasures.” In addition to touching on these stylistic debts to Continental music, White also highlights instances of specifically English sounds, such as the double trumpet motif that came to be a staple of the sacred music that English composers wrote for Cecilian celebrations. White’s tantalizing hints at the role that Cecilian music played in creating a uniquely English musical style, one that both melded and departed from Continental musical styles, should encourage future studies that address this topic in more depth. Herein lies the value of White’s book: while his study of Cecilian music traditions is richly detailed and comprehensive, it nevertheless invites additional avenues for future scholarship on English Baroque music.