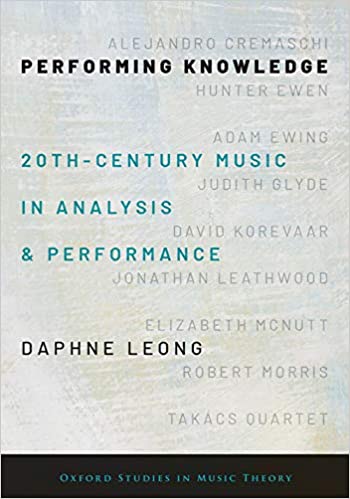 Performance and analysis have long been locked in a struggle for power and primacy. Few scholars have actively engaged both performance and analysis in their writings (often leaning substantially one way or the other), and even fewer have successfully appeased both theorists and performers in so doing. In the past, scholars analyzed works with the intention that performers use their analyses as guides; more recently theorists have analyzed performances or recordings; others (often UK-based) engage in performance practice studies. Daphne Leong’s 2019 book Performing Knowledge: Twentieth-Century Music in Analysis and Performance contributes to a small, but hopefully growing, body of scholarship wherein music theorists (or theorist-performers, like Leong) collaborate with performers and/or composers and study music together.

Leong’s Music Theory Online articles from 2005, “Virtuosity in Babbitt’s Lonely Flute” with flutist Elizabeth McNutt and “The Performer’s Voice: Performance and Analysis in Ravel’s Concerto pour la main gauche” with pianist David Korevaar, serve as the springboard for this book, which includes a companion website that seeks to provide performers with an equal voice in the outcome of analysis that doesn’t require the performer adapting their expertise to text. The website includes a trove of resources: video and audio recordings of scores, complete and partial performances of musical works, interviews with performers, tutorials on music theory topics and exercises for performers, and a composer introduction to a studied work. It also includes photographs and images of relevant artwork.

The book is delightfully structured as a theme and variations where Leong’s framing serves as the theme and counterpoint (and counterpoint and theme upon their return), and each of nine analytical chapters is presented as a variation on the theme. The variations are further broken down into three groups: those that move from performance to analysis, those that move from analysis to performance, and those that present divergent views of the relationship. Leong refers to the analytical chapters as case-studies and makes clear that “the potential relations [between analytical and performative interpretations] are infinite” (385). She conceives these varied musical collaborations in language designed to explore cross-disciplinary partnerships: through discussion of shared items (scores, recordings), shared objectives (the completion of a book chapter, the variations of this book), and shared agents (scholar-performers and performer-scholars). These three concepts, adapted from non-music disciplines, provide an insightful new way of considering performance and analysis.

The concept of shared items (also called “boundary objects”) is borrowed from sociology, having originally been applied to collaborations leading to the Museum of Vertebrate Zoology at the University of California, Berkeley (Star and Griesemer 1989). As shared items, scores, and to a lesser extent, recordings, allow for communication between performers, theorists, and composers. Star and Griesemer (1989, 404) offer collaborative strategies for working through disagreements, which Leong adapts and demonstrates throughout her variations. Shared objectives (also called “activity objects” and “epistemic objects”) are adapted from activity theory and informatics (the study of computational systems). In this application, each co-authored chapter between Leong and her performer or composer colleague(s) serves as the shared objective; it inspires and structures the relations of those involved.

Shared agents build on the concept of “third culture” from sociology (Useem, Useem, Donaghue 1963). Leong asserts that music theory and music performance are different cultures, and a third culture brings together theory and performance through interdisciplinary meetings, scholarship or practice related to both performance and analysis, and bicultural or multicultural people (e.g., theorist-performers, composer-theorists). This type of musical multicultural person serves as Leong’s shared agent and, she notes, may not accurately represent either of the first two cultures. Rather, a shared agent’s culture is hybrid, which leads Leong to assert the importance and value of including views of performers who are not also scholars and theorists who do not perform in order to accurately represent all cultures.

This lack of cultural representation—of performers feeling disenfranchised from the written dialogue of performance and analysis—is a superior characterization of one longtime criticism of previous work in this area, and Leong tackles the notion head on. Additionally, she highlights that one of the collaborative strategies provided by Star and Griesemer (1989) could represent analysis prescribing performance, which is another contentious practice for which previous performance and analysis scholarship has rightly been criticized. Leong acknowledges “fragmented discourse,” “contradictions, conflicts, and missed connections” in performance and analysis and musical performance studies, and then proceeds to work through these very challenges in each analytical variation.

Although this volume was not clearly intended as a textbook, it would be an interesting pedagogical experiment to use this book as a text over the course of a semester, examining the twentieth-century musical works within and the teamwork that led to their chapters, while fostering collaborative relationships between duos and small groups of students, leading to similar shared objects (essays, audio and video recordings) as final projects.

Leong’s identity as a shared agent, and her longtime engagement with performance and analysis, shine through in Performing Knowledge. This book, which is “intended for a varied audience of music theorists, performers, musicologists, and pedagogues” (xiii), provides a workable framework for future interdisciplinary collaborations while comfortably recognizing the inherent variability of such groupings.

Useem, John, Ruth Useem, and John Donoghue. 1963. “Men in the Middle of the Third Culture: The Roles of American and Non-Western People in Cross-Cultural Administration.” Human Organization 22/3: 169­–79.