American Gamelan and the Ethnomusicological Imagination by Elizabeth A. Clendinning 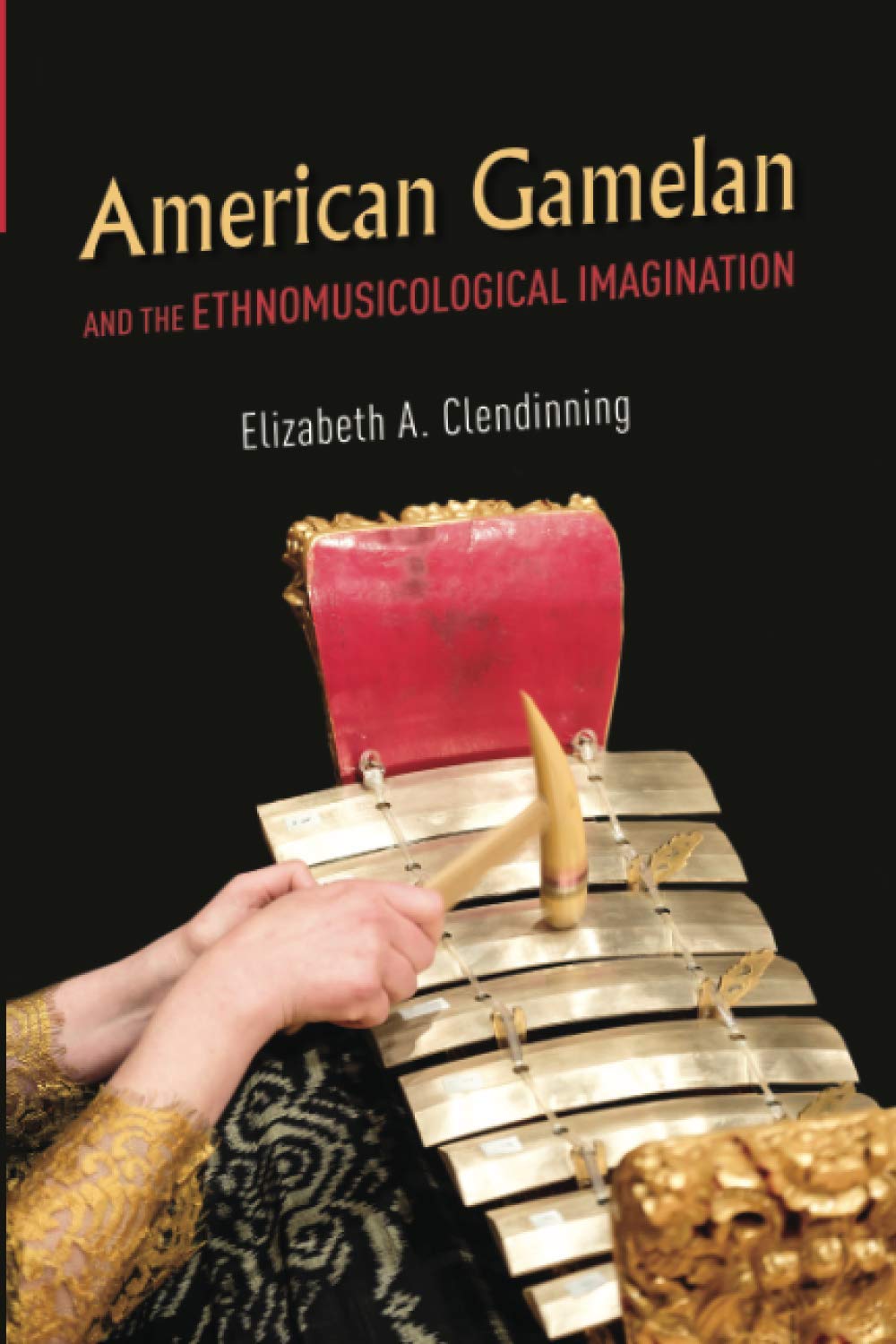 Education plays a vital, if often un-sung, role in ethnomusicology. Elizabeth Clendinning’s timely American Gamelan and the Ethnomusicological Imagination draws from the biographical experiences of I Made Lasmawan and many other Balinese musicians to interweave the tales of these musicians’ lives, careers, dreams, and goals with academic historical development in North America and Indonesia. She paints a picture of the musical and educational partnerships between the US and Bali.

Clendinning rightly asserts that much of the literature on gamelan outside of Indonesia has focused on musicians as performers and composers, not as educators. She shifts the focus to “the particular and in some ways peculiar academic ties forged through gamelan between Indonesia and North America” (2). Through this lens, composer Dewa Ketut Alit’s experiences are analyzed as teaching moments. Clendinning depicts Colin McPhee and Henry Cowell as educators and pedagogues, not simply as composers and travelers. And while Clendinning identifies academic and community gamelan groups, both are similarly scrutinized in terms of education. Chapter Eight argues specifically for multidisciplinary access to gamelan and ends with a powerful clarion call: that if ethnomusicologists are truly dedicated to “decolonizing musical practice” (178), the methods of teaching gamelan in the US must be reexamined by educators and administrators, enriched by collaborations with Indonesian musicians, and connected to other musical subdisciplines and to other disciplines across campus.

The recurring themes of desa, kala, patra (time, place, and situation); history; musical ecosystem(s); and biography continuously join gamelan to and through education in Bali and the United States. Clendinning uses the Balinese concept of desa, kala, patra to resituate American academic and community gamelan ensembles without denying or glossing over issues of authenticity and appropriation. In Chapter Nine, she provides practical and powerful ways of supporting world music ensembles and responding to superficial uses of gamelan and Indonesian teachers.

Nearly every chapter begins with one or several historical contextualizations of larger themes. For example, Chapter Two establishes gamelan’s history in the US and with(in) ethnomusicology. Chapter Three examines the history of Balinese/Indonesian and US sociopolitical relations that allowed Lasmawan and others to establish international careers. Chapter Six includes a history of tourism in Bali and of the political reactions that took advantage of tourist money while maintaining traditional Balinese arts. Chapter Eight contextualizes gamelan-as-world-music-ensemble by including the histories and development of steel pan and West African drumming ensembles. While readers who are familiar with these histories may at first expect these portions to be tedious, Clendinning always rewards close reading with new ideas and correlations.

Clendinning uses Benjamin Brinner’s concept of musical ecosystems (2016) to very good effect throughout the book. The histories and connections among Balinese teachers and their students, partners, spouses, and children is a beautiful living ecology that grows, shrinks, branches off in new directions, and spans multiple countries and generations. The author deftly navigates this admittedly messy framework by revisiting topics and people in ways that encourage growth of knowledge and avoid redundancy. While Clendinning usually mentions exceptions or outliers, she never references American-led gamelan ensembles that operate without input from Indonesian musicians. As she argues that this ecosystem requires collaboration with Indonesian musicians, I would like to have known more about what happens when this collaboration is absent. Are gamelans taught solely by Americans becoming less frequent in the US or did she discount these ensembles entirely?

Although Lasmawan is featured prominently, this work is not strictly a biography of any one musician’s life. Rather, Clendinning uses biographical focus to paint a larger picture that includes many Balinese and Balinese-American musicians. For example, Chapter Seven explores the lives and careers of three generations of gamelan musicians. In addition to Lasmawan, Clendinning presents Ketut Gede Asnawa and I Made Bandem as the “foundational generation;” Dewa Ketut Alit, I Wayan Sudirana, and Sonja Downing and Dewa Ketut Alit Adnyana as the middle generation; and Lasmawan’s two oldest sons, Putu Hiranmayena and Ade Wijaya, as the “next generation.” Throughout the book, stories and experiences from Hardja Susilo, Dewa Putu Berata, I Nyoman Wenten, Nanik Wenten, Gusti Ayu Candra Dewi and many others contextualize Clendinning’s analysis. Although I was disappointed that this biographical focus results in readers hearing more about Lasmawan and other musicians rather than from them, this feeling is mitigated by characteristic ethnomusicological quoting of interlocutors and Dewa Ketut Alit Adnyana’s extended interview in the final chapter. However, the absence of full credit to Balinese contribution also undermines Clendinning’s argument that “encouraging American scholars (including students) to develop scholarly and creative projects with (rather than on) Indonesian subjects would allow for further self-representation on the part of Indonesians” (195; my emphasis). Clendinning could have done just that by working to credit Lasmawan and others as co-authors of this book or by explicitly addressing her own positionality in relation to this argument.

Taken all together, this book is excellent for students and practitioners of gamelan, ethnomusicologists, musicians, educators, academic administrators, and historians. There is something valuable for all levels of readership regardless of their experience with Balinese gamelan, ethnomusicology, or academia. Clendinning clearly explains gamelan and academic terminology. For anyone wanting to learn more about gamelan outside of Indonesia, this book is a treasure trove not only in itself, but also because Clendinning builds inclusively on gamelan literature starting with Kunst, Hood, McPhee, Geertz, and Becker and continuing into the twenty-first century. Her “References” section represents a generation-spanning community of gamelan writers and musicians.

American Gamelan and the Ethnomusicological Imagination is an ambitious book. In less than 250 pages, Clendinning set out to show how the life and work of multiple musicians spanned national boarders, negotiated international political and educational systems, and forged a vibrant ecosystem with tendrils stretching into the past as well as into the future. In this, she succeeds. This is a personal journey for her and for her teachers, colleagues, and friends. She argues positively for a creative and collaborative future of gamelan in the United States and Bali.

Heather Strohschein completed her PhD in ethnomusicology at the University of Hawaii at Manoa in 2018. Her research focuses on the use of Javanese gamelan outside of Indonesia as well as the performance of affinity and community.