This paper was read originally at the Eleventh Annual Meeting of the Society held in New Haven, Connecticut, December 27-29, 1968 as part of a ROUND TABLE discussion concerning "Rehearsal Techniques and Historical Performance Practice." The other participants, whose papers were also included in
SYMPOSIUM Volume 9, were JOHN REEVES WHITE, Conductor of the New York Pro Musica; DENIS STEVENS, Professor of Music at Columbia University and Artistic Director of the Accademia Monteverdiana; and FRANKLIN ZIMMERMAN, Professor of Music at the University of Pennsylvania and Conductor of the Concerto Soloists of Philadelphia. Mr. Zimmerman also served as Chairman of the Panel.

The remarks I would like to contribute to this session were prompted by a recurring question in recent Handel performances: Were certain chorus portions, in which the texture is particularly light and seemingly soloistic, originally intended for single voices rather than choral sections?

The answer is evidently "No." An example of the kind is shown in Table 1, a reproduction of the autograph beginning of the last chorus from Part I of Messiah. 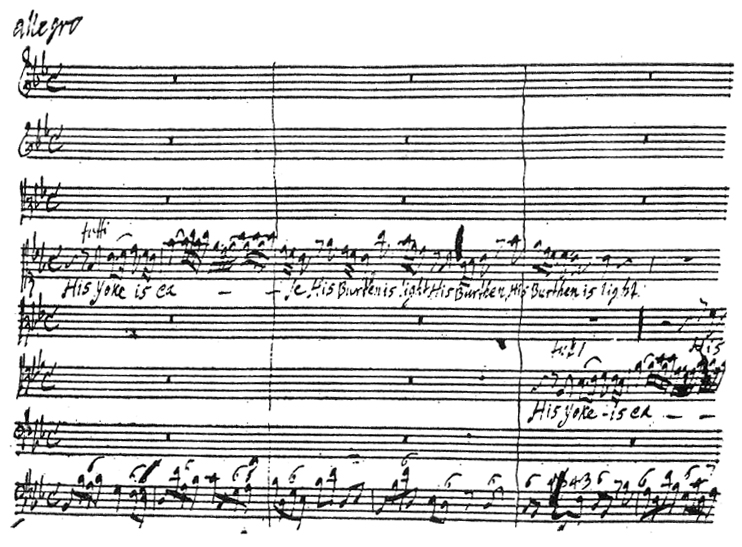 The soprano part enters alone above an agile continuo line. A lightness of texture is especially suggested by the text "His yoke is easy, His burden is light." Yet we see that Handel takes pains to mark this entrance tutti; and we might add that he entered the indication tutti for all similar passages in the work, although, as we know, the autograph was hurriedly written within the span of twenty-two days.

Nevertheless, the question is well justified. It was, in turn, prompted by parallel questions concerning Bach's choral practice. Arthur Mendel was the first in this country to distinguish between tutti and solo groups in choruses of the B Minor Mass. An example is the Cum sancto Spiritu fugue in which there is first an exposition for voices and continuo alone (which is sung by a small group) and later an exposition accompanied by orchestral tutti (which is sung by the whole chorus). About the same time Wilhelm Ehmann published an extensive essay in Musik und Kirche tracing the question of Concertisten and Ripienisten in Bach's choral writing.1

An important consideration in advocating such a free application of the concertato principle is that the difference between solo and tutti was originally quite small—probably two singers; for we can assume that the single part books which have come down to us were used by a total of three singers each; one concertista (favorito) standing in the middle and holding the music, and two ripienisti standing, and looking on, on either side. Thus, the change from tutti to solo could easily be effected on the spur of the moment and did not necessarily have to be marked in the music.

These arguments for and against choral performance contain two pitfalls:

1. Handel's tutti markings, such as shown in Table 1, are, of course, not placed with regard to the present problem. Rather, they are to distinguish the entrance in question from a preceding scoring of aria or recitative, so that they point out the very thing with which we are concerned—the omnipresence of the concerted style.

2. By underlining chorally the difference between, e.g., the continuo accompaniment of one exposition of vocal entrances from the orchestral setting of another exposition of vocal entrances, we are apt to read a detailed structural plan into the score (here the basic tutti framework emerges—these are the subsidiary solo sections), and it is here, not with the free use of the concertato manner, that we may get into conflict with the spirit of the music.

The latter point is born out by Handel's explicit ripieno markings of orchestral parts. Table 2 shows a page of the fair copy made from the Messiah autograph by Handel's copyist. 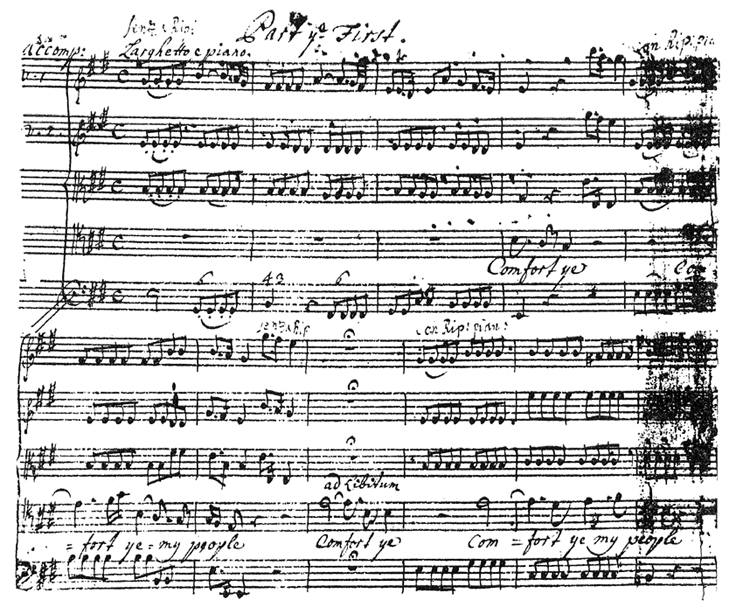 It was from this copy that Handel conducted his performances, and consequently we find his indications for the use of the full string orchestra or for a small concertino group—con rip. and senza rip.—entered here rather than in the autograph. They are in his own hand, systematically carried through the whole score, and full of surprises. For instance, the tremolo accompaniment of the aria "Why do the nations so furiously rage together?" is for the small group (senza rip.), whereas for the gentle accompagnato of "Comfort ye" the large group (con rip.) is repeatedly used (see Table 2); the opening of the "Hallelujah" chorus is marked senza rip., etc. These markings seem to contradict the character of text and music as well as Handel's own dynamic markings. We might take the last portion of "Comfort ye" as an example. For the secco setting of the words "The voice of him that crieth in the wilderness" the dynamic level changes from p to f—but at the same time Handel changed the number of players from the full string orchestra to the small concertino group. Yet all those concertino passages, occurring precisely where one would expect the use of the full orchestra, have one thing in common: a delicate ensemble situation—setting a new tempo, following a "raging" solo part, accompanying a dramatic recitative.

Here we seem to have a glimpse not only into Handel's performance situation but also into his rehearsal situation. We know how he redistributed solo tasks—he chose different soloists, rewrote arias, or replaced them with recitatives on the basis of the rehearsal experience in Dublin. The senza ripieno markings similarly appear as afterthoughts; they were entered into the score evidently at points where Handel had found out in rehearsal that he needed more flexibility than the total group would give him.

With these points in mind, I would like to return to the initial question with an example from one of Handel's earlier choral works. The final chorus of Handel's sixth Chandos Anthem begins with a soprano entrance which is supported only by the continuo line. A change of tempo and character is involved which makes this opening particularly sensitive. No solo and tutti markings appear in the autograph, here or in later similar passages. But an earlier version of the work exists in which Handel entered the name of the soloist for the corresponding entrances and in which he added the word "all" for ensuing entrances of the other vocal parts.2

Here we have a case where the decision to use soloists within a choral texture seems justified even in the version of the work whose score is not so marked—it seems justified through the work's own source and through documentary evidence of Handel's performance practice. Handel's manuscript entries in his scores show that the concertino-ripieno division is not merely a stylistic principle characterizing the work of the composer, but that it is the principle of "divide and conquer" characterizing the work of the conductor rehearsing and sizing up the practical situation of performance.