What Goes On: The Beatles, Their Music, and Their Time, by Walter Everett and Tim Riley 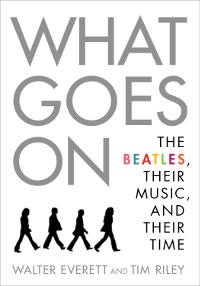 Few rock musicians have inspired such heaps of secondary literature as the Beatles. Scanning the available titles, one finds books that detail the minutiae of their biographies, analyze their music and lyrics, and situate their influence squarely within the culturally explosive decade of the 1960s. Walter Everett and Tim Riley, in their book What Goes On: the Beatles, Their Music, and Their Time, provide an admirable addition to this wealth of Beatles literature. This book clearly targets the college classroom, but it also has many attributes that recommend it for a general readership. Everett and Riley emphasize the elucidation of musical structure in clear and consistent analyses of specific Beatles songs, and they supplement these analyses with historical overviews, explaining the broad musical influences that impacted and preceded the Beatles.

Most chapters focus neatly on a single year of the Beatles’ career, with unique titles like “Celebrity Psychedelia (1967)” “or “Runaway Train: British Beatlemania (1963).” These narrative touches are indicative of a text that, for the most part, is well-written and informative. Each chapter begins with a broad introduction to cultural touchstones, such as urban race riots and student protests in 1967 or the rise of second-wave feminism in 1963, before moving on to events specific to the Beatles, such as their performance on the Ed Sullivan Show. Each chapter ends with a list of recommended readings and discussion points that can be easily be used in class sessions. The final chapter includes a chapter on the “The Ex-Beatles,” while also alluding to the “Paul is Dead” mystery and the Beatles’ financial bumbling.

Two appendices precede the selected bibliography: the first delineates songs and artists, including their US and UK chart positions, that were inspirations for the Beatles; the second is a timeline, listing important dates like births and deaths, but also cultural moments like the introduction of penicillin, the Marshall Plan, or John Lennon’s infamous statement, in an interview published in March 1966 in the Evening Standard, that the Beatles were “more popular than Jesus.” This second appendix alone is a tremendous collection of cultural touchstones, and its collation here significantly enhances the value of the book.

The main thrust of the book, and its strongest selling point, is an emphasis on the music itself. The authors foreground this strategy through a variety of overlapping approaches, including a series of YouTube videos and “song essay boxes.” The videos are listed in the preface, but they are also referenced in the text itself. But the primary delivery of the music analysis is in what the authors call “song essay boxes.” These stand apart from the text, with a darkened background. They provide a précis of the song’s narrative and insight into its compositional history and conclude with a graphic representation of the song’s musical form, including a textual description of each section’s harmony (e.g., VI7 - IV7 - V7 / II7).

These analyses represent the bulk of the text, yet they are not exactly intuitive. The authors rely on a series of invented terms, including the “tattoo” and the acronym “SRDC.” The first of these (the “tattoo”) refers to a discrete instrumental stinger or motif that functions like a pickup or instrumental fill. Listen to the opening of McCartney’s “Things We Said Today” for a typical example. The authors helpfully deploy this term both in the narrative text and in their song essay boxes, the latter of which conclude with a graphic representation of song form. But their other invention (the so-called “SRDC” acronym) is less useful: “SRDC” refers to the Statement, Re-statement, Departure and Conclusion often found in the authors’ descriptions of song form. In theory, these seem like useful additions to the pop-music analyst’s arsenal; in practice, they burden the text with a visual clutter that diminishes its usefulness.

Apart from the song essay boxes, the written text is generally vivid and easy to follow. Complex discussions of narrative intent often conclude with concise insights. See, for example, the analysis of “If I Fell,” which includes this sentence, linking the song’s title and narrative: “These authorial questions frame the song’s larger subject: the free-fall insecurity of leaping headlong into an affair” (89). At other times, the authors do not clearly contextualize their statements, providing vague or unclear references that make it difficult to be sure of the meanings they intend. For example, of “Lucy in the Sky with Diamonds,” they write that “[the song’s] fantastic imagery was inspired by the Beatle father’s fond memories of Lewis Carroll’s Alice books” (160). At the same time, the authors can be rather brusque, as when they suggest that the reader seek online the generally available hand-drawn sketch of the plot that McCartney made before shooting began on Magical Mystery Tour.

Despite occasional missteps like these, Everett and Riley’s textbook What Goes On is a valuable addition to a variety of courses on the Beatles. Its overlapping approaches to content make the book a foundation for courses in not only music history and theory, but also broader historical investigations of pop music in the 1960s. When it comes to the Beatles, there are many musical, literary and cultural veins to mine, and Everett and Riley provide an excellent jumping-off point.

Alex Ludwig is Assistant Professor of Liberal Arts at the Berklee College of Music. He received his PhD in Musicology from Brandeis in 2010. He teaches music history courses, including a cultural and musical history of the Beatles, and is currently the secretary of the Haydn Society of North America.