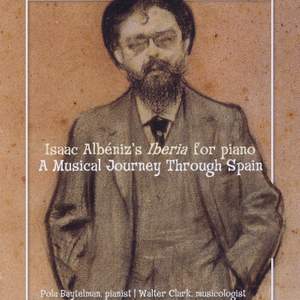 The back cover of this Blu-Ray DVD/CD package contains a summary of the authors’ intentions: “Pianist and Albéniz scholar Pola Baytelman teams up with musicologist and Albéniz biographer Walter Aaron Clark to present the only documentary on this magisterial work.” It also contains a CD track listing and Blu-Ray chapter list, but the four listed chapters are not titled, so it is unclear how the disc might be structured, and the listing is incomplete, as the disc actually contains five chapters. Such production errors plague what is, overall, a valuable and worthwhile product.

The video documentary features presentations by Dr. Baytelman and Dr. Clark, enriched by artwork and photographs of Albéniz and various locales in Spain, facsimiles of selected manuscripts, and Dr. Baytelman’s performances of various piano works (some of which feature in their entirety on the CD). The documentary offers welcome insights into Albéniz’ life and work, and particularly into his compositional evolution, culminating in Iberia. This is high quality content delivered in a logical and accessible manner, it is well-supported by the accompanying booklet, and could serve as a valuable resource for performers and scholars alike.

The CD features seven works that trace Albéniz’ compositional evolution. Dr. Baytelman has an affinity for this repertoire, and her interpretations are laudable for their soul, for capturing the spirit of the Andalusian inspiration that was often at the heart of Albéniz’ music. Dr. Baytelman is in top form in “Espagne (souvenirs): No. 2: Asturias,” which is delicate, colorful, and show her technique and control at their best. While the spirit manifested here is often wonderful, the value of this recording is diminished by numerous musical inaccuracies. While some “grit”—in the form of missed notes, for example—is welcome in a world of over-polished recordings, my concern lies not in “grit,” but in misreadings.

These reading mistakes occur in chords that are played incorrectly numerous times within a single piece, and are also found in wrong notes that occur only once, but are played with conviction and not corrected during the editing process. The original edition of Albéniz’ Iberia was rife with note errors, but the Baytelman/Clark booklet specifies the use of the corrected EMEC/EDMES edition. Using that edition for comparison, I found many errors on the recording. “El Albaicín,” for example, suffers from at least twenty-one misreadings in twenty measures. To provide several specific instances: Baytelman repeatedly plays [Ab-Db-Eb] instead of [Ab-Eb-F] on beat three of m. 54, 56, 100, 102, 230, and 232. In the same piece, C-natural instead of C-flat is played on the second sixteenth of beat two in the left hand and in the right hand chord on beat three in m. 275. Similar mistakes can be found in m. 38, 40, 100, 102, etc.

The sheer number of reading errors makes the recorded work an unfaithful rendering of Albéniz’ score. Such misreadings are, unfortunately, present in some of the other works recorded here, and detract from what is, overall, a highly valuable documentary and recording.

Paul Sánchez, composer and pianist, has been lauded as “a great artist” (José Feghali, 2013; Cecilia Rodrigo, 2019). He is Director of Piano Studies at the College of Charleston in South Carolina. He has recorded six albums to date. Sánchez studied with Tamás Ungar, Douglas Humpherys, and Alicia de Larrocha.