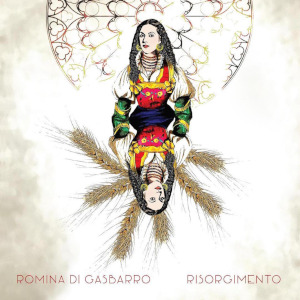 In her Juno-nominated concept album “Risorgimento,” Italian-Canadian artist Romina Di Gasbarro weaves together the individual and collective stories and experiences of the Italian people. The term “Risorgimento” (“resurgence”) is an historical term used to denote the 1861 unification of Italy. Throughout the album, Di Gasbarro draws from a variety of musical and literary references that form part of the foundation of contemporary Italian identity both in the homeland and in diaspora.

The first track “Cantu” introduces the listener to the Sardinian language, part of the rich and varied linguistic heritage of Italy. The music is in the Cantu a tenore style, a polyphonic a cappella vocal style recognized by UNESCO as an intangible cultural heritage of Italy. Di Gasbarro layers her voice to perform the melodic line and accompanying parts. The use of traditional styles is carried into the second track, “Villanella,” named after a type of Italian strophic folk song. The monophonic vocal line is accompanied by an 1831 Guadigni guitar, and the timbral quality of the vocal line is open, clear, and piercing, similar to “Cantu.”

“1000 (VIVA V.E.R.D.I.)” draws upon opera as well as the traditional Neapolitan tammorriata style. Beginning with whispered tones and ending with percussive instrumentation and bold vocals, the song narrates an historical risorgimento battle. The cry “Viva Verdi!—V.V.V.!” at the end refers to Italian composer Giuseppe Verdi, whose chorus “Va, Pensiero” is widely considered the unofficial Italian anthem.

“Kings” is the first track to incorporate English-language lyrics. The song attempts a longer-range narrative than the previous numbers, using increased harmonic dissonance to dramatize the story of Peter Thorn, the protagonist of a mid-20th century anti-fascist novel by Italian author Ignazio Silone. Drawing from this text, Di Gasbarro continues the story of the Italian working-class, emphasizing the lack of improved living conditions previously sought through revolution and unification. “A Place in the Sun (Make Our Nation Great Again)” refers to Mussolini and his attempt to occupy Ethiopia and establish an Italian empire. The instrumental accompaniment uses the kalimba, a “thumb piano” from the family of mbira percussion instruments originating in East Africa.

The mechanical, driving rhythm of “The Factory (Full Steam Ahead)” carries elements of funk, a welcome contrast. Against this modern rhythmic backdrop, Di Gasbarro uses vocal ornamentation that recalls the earlier traditional styles. Old and new meet head-on, reflecting the urban-rural divides that led to mass waves of emigration post-World War II and the factory work of Italian immigrants in their new environs.

The album ends with “Bedouin,” another English-lyric piece that mixes sounds of soft-rock and jazz. The lyrical references carry across place and time, and the character of the “Bedouin” is an archetype who is subliminally present throughout the album and represents the desire for freedom—freedom from regimes, from poverty, and from uncertainty.

Nadia Younan is a PhD candidate in ethnomusicology at the University of Toronto. Her research, which is supported by the Social Sciences and Humanities Research Council of Canada, examines the intersections of cultural trauma and collective memory in Assyrian popular music practices. Nadia is also a vocalist and saxophonist in the Toronto-based Balkan music group Meden Glas, and is member of the San Jose-based choral ensemble Assyrian Women.