In Mulieribus, Cycles of Eternity: Contemporary Works for Female Voices 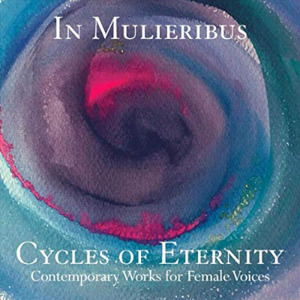 Cycles of Eternity: Contemporary Works for Female Voices is the fifth album presented by In Mulieribus, a female vocal ensemble based in Portland, Oregon, which features works by living composers, many of them women. The disc hearkens back to the early days of choral music, exploring the numerous traditional and unexpected ways in which unaccompanied women’s voices can interact with each other. The listener will enjoy the ethereal nature of the ensemble’s clear, well-blended voices, all of which exhibit mastery of straight tone techniques. The intonation is crisp and precise, allowing the voices to emphasize dissonances which resolve into pleasing tonal chords or unisons.

The opening piece, “Columba aspexit” by Tarik O’Regan, is a fitting introduction to the disc. The low voices are particularly lovely in the chant-like introduction, which leads to an energetic contrapuntal section before returning to the calm of the opening. The two “Ave Marias” are of uncommon beauty. The first, composed by John Vergin, makes liberal use of lovely arching lines (most notably at the invocation “Sancta Maria”) and ends with delicious suspensions. The second, composed by Robert Lockwood, focuses more on the virtuosity of the singing voices, with large leaps and gentle dissonances that resolve to perfectly-tuned unisons. Also of interest is the lovely “Cancion de siete doncellas” composed by Craig Kingsbury. There are several unexpected chord progressions that delight the ear, and Kingsbury also achieves some interesting textures, “stacking” the voices to create a cascading, rippling effect that trickles both up and down.

The only issue that may confound the listener is the diction, which is muddied by the reverberant acoustic of the recording space. It was particularly difficult to pick out the words in the three pieces from the cycle for which the disc is named; this is a shame, because the melody and harmonies in these pieces were both intricate and thought-provoking. Overall, Cycles of Eternity is an enjoyable and worthwhile listening experience.