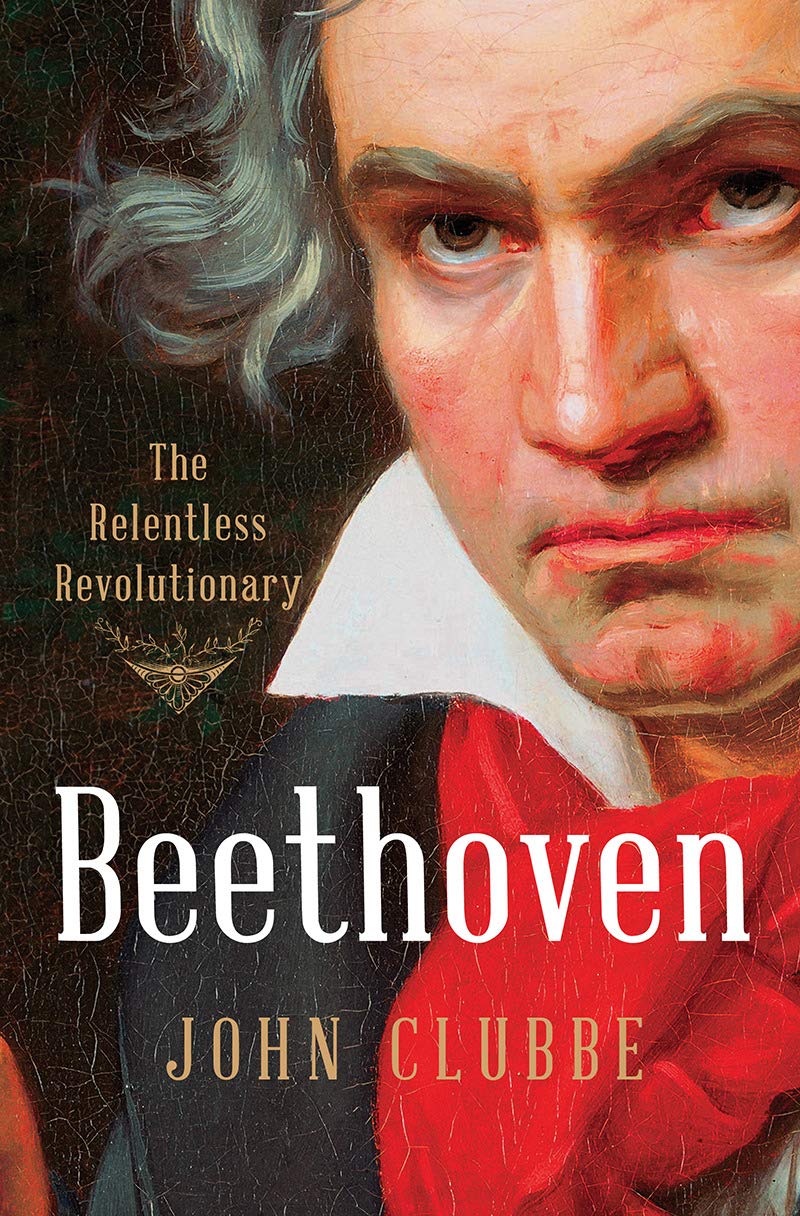 Do we need another Beethoven biography? The composer has been thoroughly examined in countless volumes, from the nineteenth century on. Even so, John Clubbe in Beethoven: The Relentless Revolutionary has proven that, although many have unveiled new understandings of the composer, there is still more valuable insight to be gained. Clubbe’s writing neither panders to the traditional hegemony of the composer, nor focuses on the relationally difficult man that some biographers, such as Jan Swafford, seek to reveal. Rather than a conventional chronological biography of such a well-documented man, Clubbe writes a political history of Beethoven, focusing particularly on the influence of Napoleon Bonaparte and the French Revolution.

Clubbe states early on that his work is not a “life-and-times” biography of Beethoven. Yet it begins as most biographies do. In the first chapter, Clubbe predictably, yet swiftly, leads the reader through the important minutiae of the composer’s origins. While these details often take up dozens, sometimes hundreds, of pages in the hands of other biographers, Clubbe only uses a few. He omits many fascinating biographical details, favoring a more thorough discussion of the connections between the French Revolution and Beethoven’s artistic trajectory. The subsequent chapters examine Beethoven’s political beliefs as evinced from letters, personal effects, and even portraits of the composer that have survived. They also investigate some of Beethoven’s compositions and their “revolutionary” connections.

As Clubbe states in the introduction, this work is intended for the layperson, not the musicologist. The tone throughout is both authoritative and unpretentious, in part accomplished through the translation of non-English text (a welcome addition that is often excluded in more strictly musicological works). Rather than providing pages-long analyses of Beethoven’s compositions complete with musical excerpts, Clubbe writes a refreshing contextual account of the composer’s music infused with politics and war stories. As a result, Clubbe gives the reader a politically-informed social history that revolves around a musician, not exactly a musical biography in the traditional sense.

Although Clubbe insists this work is not written for musicologists, it reveals historical insights that musicologists will surely value. Clubbe does not provide theoretical analyses of Beethoven’s compositions, but his lengthy discussions of what he deems the “revolutionary” works are of considerable importance to his study. Beyond the expected examination of the “Eroica” symphony, he cites the funeral march from the Piano Sonata, Op. 26 (incorrectly identified as the second movement of the “Pathétique” Sonata, Op. 13) as a possible precursor to the “Eroica” (145-146); he also gives a striking evaluation of the militaristic songs Beethoven wrote to appease Austrian officials, who would have surely punished him if they were aware of his true political feelings (154-158). Clubbe thereby shines light on these and other examples that lie outside of Beethoven’s most familiar repertory.

Although Beethoven: The Relentless Revolutionary is generally free from overly academic jargon, the layperson who picks it up should be prepared for quite an involved reading, with many complex military and political descriptions. There is much information to be absorbed, begging the question as to what relevance this five-hundred-plus-page tome has to the layperson or the dedicated enthusiast of Beethoven’s music. Writers since the nineteenth century have emphasized Napoleon’s influence on Beethoven, particularly in the Third (“Eroica”) Symphony; Clubbe fills out this picture, revealing, for example, a possible double-meaning behind Beethoven’s Twelve Variations for Cello and Piano (WoO 45), which may be informed either by an allegiance to Vienna or reverence for Napoleon (155-158).

Clubbe’s chapters are organized by themes and ideas rather than as a strict sequence of events. There are also numerous references throughout the text to writers and other figures born long after Beethoven’s death, but the approach is far from anachronistic. Clubbe notes the ideas of the novelist Milan Kundera (426), mentions Stanley Kubrick’s implementation of Beethoven’s music in his films (407), and quotes the writings of Friedrich Nietzsche on numerous occasions to impress upon the reader the long-lasting relevance of Beethoven’s work beyond his own lifetime.

Clubbe does not consider himself a musicologist but rather a “cultural historian” (xviii). Regardless, his work toward a politically-conscious understanding of Beethoven is worth taking seriously, especially among students and educators of Beethoven’s music. Despite the occasional overly-thorough explanation and mis-identified sonata movement, Clubbe has contributed a significant addition to the scholarship of an iconic composer. He has revealed the political savviness and ideological fortitude that were so evident in Beethoven’s actions. Above all, Clubbe has helped his readers to understand that while other artists of the Enlightenment were simply inspired by revolutionary philosophies, Beethoven did everything in his power as a composer to embody those philosophies and bring them to actualization in his flesh-and-blood world, that his music carries the very sounds of revolution.

Jacob Clark is Adjunct Professor of Piano at Drury University in Springfield, Missouri. He received his Master of Music in Piano Performance from Missouri State University. His pedagogical experience is varied, focusing on both elementary and adult piano techniques. Jacob performs regularly, both as a soloist and collaborative pianist.