Wagnerism: Art and Politics in the Shadow of Music, by Alex Ross 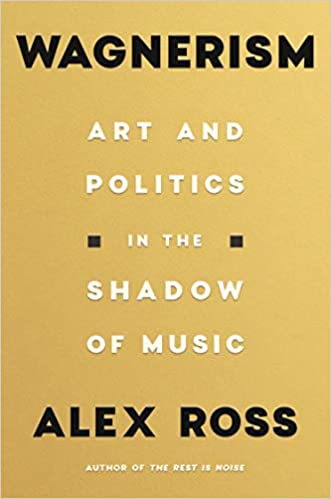 In the supporting digital material for Alex Ross’s seismic, exhaustive, absorbing tome Wagnerism, a photograph shows Adolf Hitler sitting in the very front row at the Gewandhaus in Leipzig for the commemoration of the fiftieth anniversary of Wagner’s passing.1 Alex Ross has compiled an extensive audiovisual companion to the text that will make one’s journey through Wagnerism come alive. See www.therestisnoise.com/wagnerism. He is joined by Winnifred Wagner, the composer’s daughter-in-law, and her son Wieland. Hitler looks ahead directly to the podium, where he sees Carl Friedrich Goerdeler, the mayor of Leipzig - a man he will execute twelve years later. Each man is present to honor the legacy of Wagner, and each man will attempt to murder the other. Only one will succeed.

This kind of violent political posturing, whether subliminal or obvious, is a major leitmotif that emerges from the soaring legacy of Richard Wagner. Alex Ross aims to excavate the man, the myth(s), and the legend, and succeeds in presenting a complex and nuanced look at Wagner as he was, Wagner as he wanted to be known, and Wagner as we now know him: he was perhaps the most complicated and polarizing figure in classical music history.

Alex Ross makes a bold choice in functionally eschewing a simple answer to the question “What is Wagnerism?” Rather, as he teases out infinite threads toward their cultural ends, he poses the question instead to the reader. There will be as many good answers as there are purveyors of the art.

The book begins, as all good stories do, at the end. Wagner has died, and the world rends its clothes as if “God is dead” and all is lost. (In fact, Nietzsche, the author of that very famous proclamation, will make a recurring and complex supporting figure in the first third of the book.) Wagner’s impact on fascist thought and his popularity with nationalist autocrats are well-recognized, but the extent to which his thematic mettle, sense of scale, and keen knack for evoking transcendence have shaped the rest of history often go unappreciated. Most interesting in this book is the way that Alex Ross illuminates the dignified cast of supporting characters who come into contact with The Meister, whether directly or indirectly. Although it is Richard Wagner’s name that is emblazoned on the dust jacket, we learn of his every feature in a million tiny mirrors through his close contacts, distant fans, and posthumous disciples - willing or otherwise.

The vividness of these supporting characters, some of whom only appear for a page or two, is dazzling. An emerging Friedrich Nietzsche idolizes Wagner, and even after a dramatic falling out continues to proclaim his love for Richard (and his wife Cosima, but that’s another story) in subversive and overt ways until his death. Irish author James Joyce emerges as an “almost-was” in the musical world, whose output is rife with Wagnerian narrative themes, practices, and subject matter, including in his milestone Ulysses. J.R.R. Tolkien denies the overt influence of Wagner on his literary masterpiece The Lord of the Rings, a work which carries great synergy with a Ring of a different kind, even as he and C.S. Lewis read aloud to one another from Walküre in The Eagle and Child. The complexity of these characters’ (and a thousand others’) relationships to Wagner, and of his impact, resonate with tensions and presuppositions that persist around The Meister’s legacy to this day.

Ross deftly shows the more subversive and even beautiful ways in which Wagner shapes, toward both exultant beauty and lingering darkness, our popular conscience, as in film. Modern cinema continues to engage with Wagner, whether in sprawling modern epics like The Lord of the Rings or Star Wars, or in more intimate ways, as it does within the aching beauty and hazy-edged mystery of Terrence Malick’s To the Wonder or The Tree of Life.

For this reason, it is possible that the Richard Wagner you encounter in Wagnerism will be a more compelling figure than you’d predicted. This documented anti-Semitic figurehead, this toxic chauvinist, is also an engine of fantastical wonder, deploying the power of myth on a planetary scale and yet finding himself alone on the shores of Lake Lucerne, afraid that his work will be forgotten. These complexities are embraced throughout the book without judgment, and while Ross is always candid about Wagner’s racism and basest instincts, he refrains notably from evaluation. Rather, we are given supreme context to draw our own conclusions about the best way to interact with Wagner’s complicated legacy. Ross lays out one approach to answering the problem of performing art by deplorable people: present their art from three hundred sixty degrees with exhaustive context that does not romanticize genius at the expense of humanity.

In spite of the painstaking detail and seemingly endless cast of characters, Wagnerism remains enormously readable. Even as it synthesizes hundreds of sources and deploys extensive direct quoting, I found myself gripped by the sheer scale of Wagner’s complicated and enduring shadow. If Ross used composers to illuminate the Twentieth Century in The Rest Is Noise, then here he allows modern cultural history itself to reveal the titan of Wagnerism. The palpable shockwaves of Wagner’s impact reverberate to this day, still shaking the foundations of opera houses, still rattling university lecture halls.

1. Alex Ross has compiled an extensive audiovisual companion to the text that will make one’s journey through Wagnerism come alive. See www.therestisnoise.com/wagnerism.

Andy Hudson, Assistant Professor of Clarinet at the University of North Carolina Greensboro, performs widely across North America and Europe in a variety of settings and is praised for his “fearless” performances. Hudson holds a DMA in Clarinet Performance with a Cognate Certification in Music Theory from Northwestern University.