The Secret Between the Shadow and the Soul. 2019. Branford Marsalis Quartet 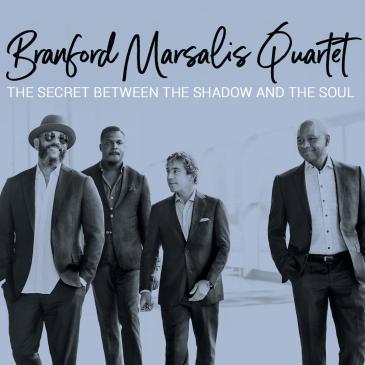 Branford Marsalis has led several iterations of his quartet over the years; the current ensemble features pianist Joey Calderazzo, bassist Eric Revis, and drummer Justin Faulkner. The Secret Between the Shadow and the Soul balances the group’s traditionalist inclinations with virtuosic free improvisation and unbridled expression.

Revis’s Dance of the Evil Toys employs an unpredictable, sinuous melody that playfully trades back and forth between Marsalis and Calderazzo above a primal, incessant bass line with comical, whirring interjections from Faulkner. This oddball evocation of mechanical toys gives way to breakneck post-bop solos from Marsalis and Calderazzo. Revis is also the composer of Nilaste, a ballad based on an ostinato bass line. For both of Revis’s tunes, Calderazzo and Marsalis perform adroit solos, each with a clear sense of narrative married to the admirable ability to react instinctually to the rest of the ensemble. In relatively stark contrast to Revis’s adventurous pieces, Calderazzo’s haunting Conversation Among the Ruins is a more traditional tune buoyed by colorful harmony, delightful textures, melodic syncopations, and some masterful Latin-tinged brushwork from Faulkner. Conversations Among the Ruins features solos from Calderazzo and Marsalis that are dexterous in their climaxes, but also played with moving nostalgia.

Calderazzo’s Cianna is more direct in its Latin groove, beginning with a rhumba and continuing to the most traditional-sounding rhythmic feel of the album. This track is perhaps the CD’s most insistent earworm. The last original on the album is Life Filtering from the Water Flowers, which pays tribute to Marsalis’s late mother, Delores Marsalis. Calderazzo plucks inside the piano and Revis taps the body of his double bass, creating a mystical, grief-stricken soundworld. The overall aphoristic effect of these percussive explorations is similar to that of an experimental classical composition. Marsalis plays tenor sax on the tune, overlaying the thumps and taps with a somber meditation that gives way to a section of high-intensity jazz keening. This latter section mixes a Coltrane-esque wall-of-sound grit with poignant, dark melodies.

The remainder of the disc balances out the darkness of Life Filtering with ebullient performances of bright cover songs. The first, Andrew Hill’s Snake Hip Waltz, is an idiosyncratic blues-waltz that features burning solos by Marsalis, a McCoy Tyner-channeling Calderazzo, and Revis, who sings along with his improvisation. The closing track of the album is an extended New Orleans-style take on Keith Jarret’s tune The Windup, during which the group imposes a second-line feel supporting some churchy gospel sounds from the ensemble.

The musicians shine during their solo improvisations, but are just as captivating in their intuitive reactions while supporting one another during those improvisations. All of the musicians are brilliant, but this album shines because of the unique way they create jazz with one another, interacting intuitively to create wildly expressive music.

Joel Love, DMA, University of Texas Austin, is a composer and Professor of Music at Houston Community College. Love also holds degrees from the University of Houston and Lamar University. His compositions often seek to marry Western classical music with popular music and jazz, which shaped his early life in Texas and Louisiana.