The Potential for Sight-Singing Evaluation with SoundCheck

SoundCheck is a performance assessment tool recently acquired by and integrated into NoteFlight, a popular music notation software application. Like NoteFlight itself, SoundCheck is entirely browser-based (NoteFlight recommends the Google Chrome browser for optimal performance), making both tools attractive options for music educational applications.1Both NoteFlight and SoundCheck are available as iOS applications as well, though these were not reviewed here.

Currently, SoundCheck is available as an optional add-on feature to NoteFlight Learn, a Premium version of the notation software that is geared toward classroom settings: unlimited virtual classrooms can be configured, hundreds of ready-made lessons can be accessed, custom worksheets, templates, and assignments can be created, integration with many of the major Learning Management Systems (Google Classroom, Blackboard, Moodle, Canvas, etc.) can be configured using the LTI standard, and COPPA compliance is assured.2My first attempt to integrate Noteflight Learn via LTI was with Moodle, the LMS used at my institution. However, though the integration worked, I found it to be a less elegant solution than connecting with Google Classrooms (which are also available to me through my institution’s G Suite). It became immediately clear to me that Noteflight’s engineers have invested much more in the latter integration, as the available features and UI are much more robust. NoteFlight Learn pricing begins at an annual rate of $69 for up to 10 students, with the SoundCheck add-on cost of an additional $3/student. For my use this year, I am using NoteFlight Learn (and the SoundCheck add-on) in two classes totaling 30 students. Total cost for our department came to $199 ($69 for 10 students + $2/additional student for NoteFlight Learn, plus $3/student for SoundCheck) for the full year.

As it is currently configured, SoundCheck is an excellent tool for the type of playing or singing test commonly used by ensemble directors at the college or high school level. Instructors can create passages to be assessed using NoteFlight’s notation tools (or import them from MusicXML files or other NoteFlight Learn Content Libraries available as add-ons), convert them from NoteFlight into SoundCheck files, and create assignments that students can access and submit. Upon clicking the “Create SoundCheck Score” button, instructors are given some customization options, and NoteFlight works in the background to generate the SoundCheck score to be used during the assessment (see Example 1 and 2).

Example 1. Sample passage to be assessed created in Noteflight 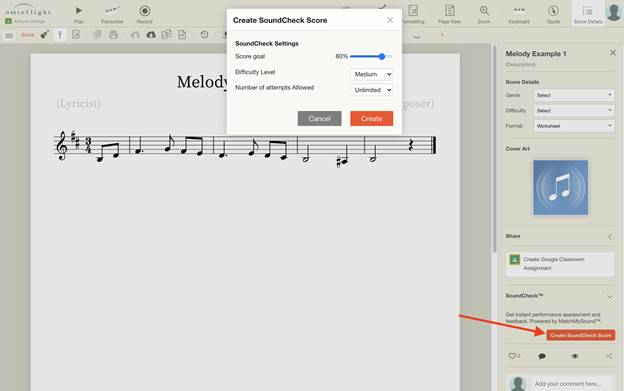 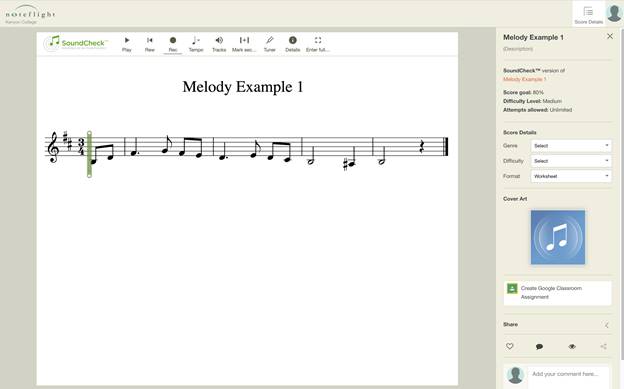 As in many other applications, students press the Record button when they are ready to perform the passage and receive their assessment. SoundCheck creates an attractive visual beneath the passage showing an outline of the recorded waveform (gray) superimposed by a colored line. NoteFlight’s documentation explains interpretation of the colored line in this way:

The performance feedback is displayed as a full graph or a simple graph, with individual messages to indicate rhythm, pitch, and intonation errors. Simply hover over any section of the line to see the error message. The Full Graph mode uses red-yellow-green to indicate pitch errors, and the height of the line indicates rhythm errors. When the line goes up it means the performance was ahead, and the line going down means the performance was behind.3https://support.noteflight.com/hc/en-us/articles/360045725372-SoundCheck-in-Noteflight-Learn-Assessment-Overview, accessed 30 November 2020.

In Example 4, SoundCheck assessed my performance at 98% accuracy overall: 98% for length (it claimed that I did not hold the final half note for full duration), 96% for pitch (the areas in yellow indicate slightly out of tune singing on the first pitch as well as the E4 in m. 2), and 100% for rhythmic accuracy. Example 5, which I purposefully sang with some pitch and rhythm errors, did not score as highly, at just 61% overall.

Example 5. Assessment of a “Poor” performance

In a Spring 2021 update, SoundCheck introduced a feature called “Locked Mode,” which allows instructors to have greater flexibility and control in setting which aspects of an assignment may be fixed (“locked”) or adjusted by the student (“unlocked”). In Locked Mode (see Example 6), tempo, recording, and playback settings are not editable by the student; rather, they remain as the instructor set them up. In Unlocked Mode, these parameters may be adjusted by the student. Locking tempo, recording, and playback settings gives instructors greater control over assessment assignments, while leaving them unlocked would be advantageous to students who wish to hear MIDI playback of the melody, practice assignments at slower tempos, or record more takes. 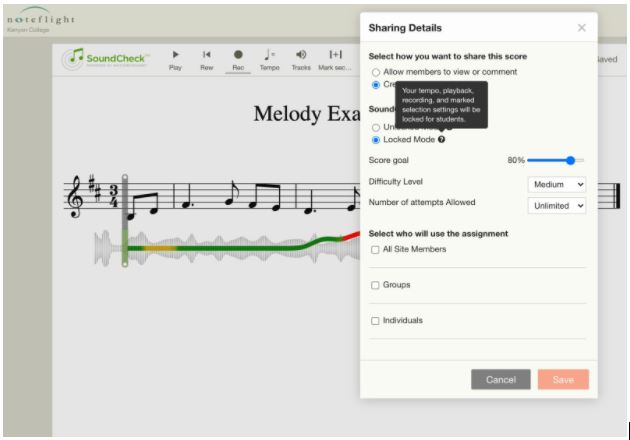 I had high hopes that I would be able to incorporate SoundCheck into my music theory/aural skills classroom this year to help with the assessment of sight-singing. While SoundCheck boasts many useful features as an assessment tool for playing/singing tests of the type I described earlier, the goals of sight-singing differ enough, and SoundCheck’s controls were not yet customizable enough, so it did not meet my particular needs until the “Locked Mode” update in the late spring, at which point it was too late to integrate this year. While I plan to use SoundCheck in the fall, I continue to hope for additional improvements. Two come immediately to mind. First, SoundCheck does not presently allow the file to be transposed higher or lower (e.g., into a more comfortable part of a student’s vocal range). As the instructor, it would be nice to have the flexibility to toggle these capabilities on or off. Second, while I have the option to limit the number of takes the student may record, I have no ability to limit the amount of time in which this occurs. If a goal of sight-singing is to see and realize a novel melody relatively quickly, it would be helpful to control how much time a student has to do so. On both counts I am optimistic; the support team at NoteFlight has welcomed feedback and suggestions, and the updates that have been released this year have clearly made the product better.

1. Both Noteflight and SoundCheck are available as iOS applications as well, though these were not reviewed here.

2. My first attempt to integrate Noteflight Learn via LTI was with Moodle, the LMS used at my institution. However, though the integration worked, I found it to be a less elegant solution than connecting with Google Classrooms (which are also available to me through my institution’s G Suite). It became immediately clear to me that Noteflight’s engineers have invested much more in the latter integration, as the available features and UI are much more robust.

Ted Buehrer (Ph.D. in Music Theory, Indiana University) is Professor of Music at Kenyon College in Gambier, Ohio, where he teaches classes throughout the undergraduate music theory core curriculum, offers electives on jazz theory/arranging and jazz history, and leads the college’s jazz ensemble.