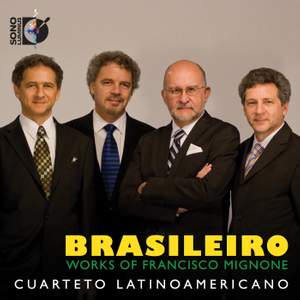 The Mexico-based string quartet Cuarteto Latinamericano is committed to the performance of music by prominent Latin American composers. Their 2002 recording of the Villa-Lobos string quartets was nominated for a Grammy Award. Brasileiro, released in 2012, features the quartets of Brazilian composer Francisco Mignone. The music included in this collection serves as a strong introduction to the composer’s distinctive compositional style. Mignone’s music displays European influences from time spent in Italy and Spain, but it also bears the stamp of a composer true to his Brazilian “soul,” showing great harmonic and rhythmic inventiveness. The Cuarteto Latinamericano shines in this repertoire.

The album’s opening tracks are from the composer’s mature period of the late 1950s. The two string quartets presented take the proverbial torch from fellow Brazilian Heitor Villa-Lobos’ string quartets. Villa-Lobos’ final string quartet was composed in the same year as the two presented here: 1957. Mignone’s string quartets brim with color and an outsized dynamic range. The ensemble tears into the brisk and bouncy first movement of the second string quartet, and produce whispering and shimmering textures in the second movement. The final movement, “Desafio” (which literally translates to “challenge”), features irregular meter and extensive interplay between clear tonality and biting dissonance. The first string quartet features a lovely Andante second movement where the ensemble sways in dancing rhythms with sultry legato thematic development in the minor mode. There are touches of an Argentinian tango; its bittersweet elegance is effectively captured by the Cuarteto. The final movement of the first quartet is the brightest and most bubbly of the two quartets. The ensemble here grooves to the zesty syncopations, providing a triumphant finale to these two major works by Mignone.

The next selections on the album highlight the influence of European models on Mignone’s compositions. These pieces from the 1920s and ‘30s capture the nostalgic wistfulness of an Italian Barcarolle (Barcarola), the gracefulness of a Viennese-style minuet (“Minueto,” excerpted from an opera by Mignone), and the evocative songs of Spain (Tres Canciones Españolas). These three “Canciones” seem like separate movements of a unified work; the first, simpler in texture and gently flowing in a major key, the second, sadder and with more sentimental soaring violin lines, and the final movement an outburst of excitable energy. The last song may be the highlight of the album. The group masterfully balances pizzicato and strummed effects with a sultry, flamenco-inspired lyricism and rhythms that strongly evoke the Spanish folk idiom.

The album closes with more music from the 1950s. The Two Essays are more traditional than the adventurous string quartets, focusing firmly on conservative, lyrical melodies. The first essay is dark and passionate, while the second is almost hymn-like in its opening and closing sections.

This is a most satisfying album. It is to be hoped that the Cuarteto Latinoamericano will continue to record important works by Central and South American composers.

Justin Badgerow, pianist, is an Associate Professor of Music at Elizabethtown College in Pennsylvania. He has been a performer and presenter at meetings of MTNA and CMS.