Designed by bassist Mauro Battisti, Drumgenius was first released in 2012 as a tool to make his practice sessions more efficient and fun. Battisti describes his earliest practice routines as play-alongs with famous recordings or with a traditional metronome. Drumgenius emerges from combining these resources. The focus is on sound and groove from accessible drum set patterns, going beyond practicing and learning how "different exercises or melodies can change under one's fingers based on sensations of rhythm."1Mauro Battisti, interview by author, October 15, 2021. This "super metronome" heightens the quality of the experience by helping players play with a virtual drummer, instead of practicing against a non-musical click. As a result, players learn how to listen to and interact with musical contexts that are happening in real time. According to Battisti, "nothing can substitute for a live drummer... this is just preparation for having a better relationship with a drummer or percussionist."

Now in version 3.02, 500 loops are available in a wide range of styles, such as Brazilian, Afro-Cuban, jazz permutations, pop/rock/country, funk/hip-hop, world, mixed meters, and polyrhythms. Each pattern has a brief description, pre-set starting tempo, and implied pitch center (see Figure 1). Of these, 168 contain a “clave added” feature for an additional layer of rhythm on top of the core loop (see Figure 2).

Drumgenius contains loops of 2-12 bars sourced from virtual drum sound libraries. Battisti builds them note by note from a MIDI keyboard directly into a digital audio workstation (Logic Pro). By splitting rhythmic components into different tracks, he avoids the mechanical feel of a standard metronome and can instead replicate the nuances of a live player.2i.e., a single ride cymbal pattern can exist as multiple separate tracks in Logic Pro each representing downbeats, offbeats, and smaller interior subdivisions/"skip" notes Users can explore loops that emulate famous drummers (e.g., the "Purdie" shuffle or "brushes ala Elvin Jones") or follow annotations to source recordings. The app does not contain transcriptions of entire songs or arrangements, or any harmonic backing from piano, guitar, or bass.

Drumgenius can be used by any level of student, providing a fresh approach to fundamentals, improvisation, or (with the right sound system) as a backing track during rehearsals. This app is adaptable for studio lessons or solo practice, chamber or large ensembles, patterns for meditation, or a structure for practicing extended bowing exercises or pitch drones.

One minor limitation is tempo throttling, keeping loops to +/- 20% of the pre-set tempo. This prevents warping at extremes but hinders functionality as a replacement metronome. Fortunately, there are multiple examples under each style to cover various tempi. A second consideration is interpreting the pre-set tempos. In select tracks, the tempo reflects smaller subdivisions instead of perceived groupings.3The included "Mambo 1" loop is marked at MM=190, a reflection of the underlying quarter note pulse used to build the loop. It is not uncommon to interpret this up-tempo pattern in half note groupings, which would change the marked tempo to half note=80. This does not detract from the quality of the loop; users should interpret the sound instead of the number.

While comprehensive, there are occasional gaps in the collection. Battisti's ongoing goal for Drumgenius is to reach 1,000 individual loops within the app. Currently, he has plans to expand the world music category, with requests from Greece, Peru, South Africa, and more. 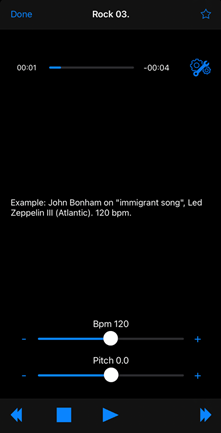 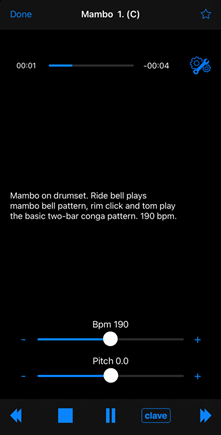 3. The included "Mambo 1" loop is marked at MM=190, a reflection of the underlying quarter note pulse used to build the loop. It is not uncommon to interpret this up-tempo pattern in half note groupings, which would change the marked tempo to half note=80.

Michael S. Yonchak, DMA in Wind Conducting (University of Kentucky) is the Director of Bands and Associate Professor of Music at Otterbein University in Westerville, OH. In addition to freelance percussion work, his research interests explore popular music and culture and the music of Frank Zappa.