The Cambridge Companion to Women in Music Since 1900, edited by Laura Hamer 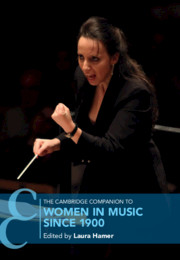 The Cambridge Companion to Women in Music Since 1900 focuses exclusively on the contributions of women, not only as art music composers and performers, but as educators, conductors, and practitioners of popular, folk, and electronic music over the past hundred and twenty years. As noted in the book’s preface, this work is intended to enhance an understanding of music in a gender-inclusive context (xxii).

For any one book to adequately cover all of women’s contributions throughout the past century would be impossible; as such, the topics in this book are selected to “represent examples and case studies of the sorts of musical work which women have done and the lived experiences which they have had, covering as broad a range of professional fields and musical genres as possible” (xxiii). The Companion’s content is extremely well-organized; it is separated into four sections: “The Classical Tradition,” “Women in Popular Music,” “Women and Music Technology,” and “Women’s Wider Work in Music.” At the close of each section are reflections entitled “In Her Own Words,” firsthand accounts by women with experience in these fields. These thoughtful inclusions provide powerful summations, allowing women’s voices to be heard, a critical element of feminist methodology.

The contributing authors encompass a broad range of disciplines and scholars, primarily from the US and the UK. Because it covers varied topics and musical styles, and the language while sophisticated is not overly technical, the book can be read and appreciated by anyone interested in the contributions and challenges that women artists face and continue to face. The content, however, will be most meaningful to those interested in the cultural and musical traditions of the United States and/or the United Kingdom, as nearly all of the case studies derive from these regions. The contributors’ area of expertise focuses on these areas; therefore, this perspective is logical but narrows the work’s scope considerably.

Rather than providing detailed biographies of women musicians/composers (presumably, the reader will have either a familiarity with these women or the knowledge and resources to access the details of their lives), the book provides only biographical content relevant to the topic and subsequently supported by musical examples from these artists. The chapters provide detailed social context. This is particularly effective in the chapter by Elaine Kelly, “Behind the Iron Curtain: Female Composers in the Soviet Bloc.” Kelly explores how the supposed gender equality “promised by Marxist Leninist ideology” differed in some ways from that afforded female counterparts in the West (33). Another standout chapter for examining social context is Jacqueline Warwick’s “Leaders of the Pack: Girl Groups of the 1960s.” Warwick’s insightful assessment regarding the way “girls constitute a particularised subset of youth, which is normally gender-neutral but actually usually designates boys” provided an extremely relevant background of how girl groups and music targeted specifically to young, female audience are often immediately dismissed as trivial (120). This early context opens Warwick’s fascinating discussion about music in girl culture.

Each individual chapter is meticulously researched and cited, and a “Further Reading” section closes each chapter. In many of the chapters, the authors include their own writings among the suggestions for further reading; although the authors are experts on the topic and do provide excellent supplemental material, ideally, further reading would provide a different perspective on the topic. Michael Brocken, in his contribution, “The British Folk Revival: Mythology and Women,” spends an unnecessary amount of time talking about his own experiences and previous research. Approximately a third of the chapter was about its male author, including a subsection entitled “Gender and My Mid-1990s Thesis.” In a book about women in music, a lengthy extolling of the male author’s background and experience was an uncomfortable inclusion and temporarily silenced the voices of women in favor of his own. Brocken’s chapter does represent a significant contribution on the subject of folk music. Of particular interest are his comments on the misogynistic content so often found in folk ballads; he points out that “rape, infanticide, and murder narratives contained in some ballads and traditional songs require at the very least discussion, recontextualisation or perhaps ‘answering’ in a new song” (169).

A “select” bibliography, which is quite extensive, closes the book. This alone is incredibly valuable, and the sources include not only the most recently published research on the topic, but also the well-known feminist musicologists such as Adrienne Fried Block, Marcia J. Citron, Suzanne G. Cusick, Susan McClary, and Nancy B. Reich. Equally important are the numerous sources that provide a voice for women of color, an aspect frequently and regrettably absent in the early days of feminist musicology. Representative examples include Patricia Hill Collins’s Black Feminist Thought: Knowledge, Consciousness, and the Politics of Empowerment; Kyra Gaunt’s The Games Black Girls Play: Learning the Ropes from Double-Dutch to Hip Hop; D. Antoinette Handy’s Black Women in American Bands and Orchestras; and bell hooks’s Black Looks: Race and Representation.

The Cambridge Companion to Women in Music since 1900 is an excellent addition to any library. The diversity of musical genres and of the women represented makes the book a fascinating and valuable read on the significant roles that women have played in music since 1900 and on the obstacles they continue to face.