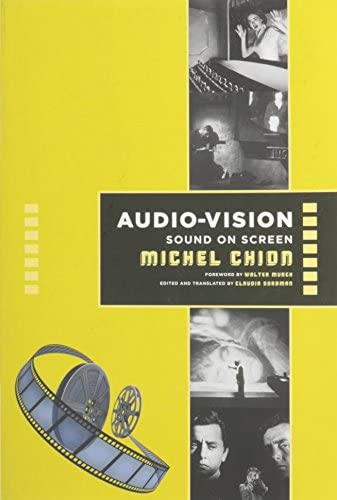 The second edition of Michel Chion’s Audio-Vision: Sound on Screen calls on readers to engage with cinema through an exploration of the rich mutual relationships between image and sound. Chion’s focus is on the myriad ways by which cinematic sounds (which include all foley sounds, dialogue, music, and acoustical spaces) contribute to and take on meaning within films. This work presents a way of experiencing film that will reward those who seek to have a thoughtful and critical engagement with cinema regardless of their background and training.

Chion’s approach is rooted in the idea that all sound (speech, noise, and music) provides “added value” to the image, and that the spectator makes meaning from the “contract” between these overlayed elements (34). By uncovering the often overlooked contract between sound and image, Chion reveals the illusion of cinema and asks readers to explore the fascinating inner workings of that illusion. This book is not intended to be a textbook on film music nor, for that matter, on any one kind of sound, and those seeking an analytical approach to music may be a bit disappointed.
Many of the interactions that Chion observes between sound and image are expressed through an impressive lexicon that can at first seem esoteric, but that ultimately gives the reader freedom to grapple with the filmic content. A helpful design element in the eBook version is that all terms and notes are conveniently hyperlinked to a pop-up glossary, aiding the reader in a timely manner with Chion’s definitions of terms such as “acousmatic,” “braided,” “noniconogenic,” and “vectorization”.

The book is organized into two sections. “Part I: The Audiovisual Contract” articulates how cinematic sound and image combine to create an illusion of realism. Giving names to the sounds in film is central to breaking through the illusion, as doing so leads the spectator to consider both the source of the sound and the intended impression when the sound is paired with an image. For, as Chion writes, we “do not see the same thing when we hear [as we do when we merely see] and we do not hear the same thing when we see [as we do when we merely hear]” (xxi). “Part II: Beyond Sounds and Images” provides a methodology for reading the audiovisual modes within a film. Chion provides methodologies for approaching the detailed work of reading scenes for meaning by identifying key interactions between sound and image. Audiovisual synchronization is more than Mickey Mousing. It occurs between spoken word and visual cuts, emblematic sounds, and even in association with temporal elasticity (as in those time-bending moments found in Japanese animation) (61).

Chion explains that being cognizant of the sound-image pairing opens the spectator to reflect on the meaning we impose upon such pairings. Take for example the pairing of voices and faces, of footfalls within implied spatial environments, the sounds of punches, and variations in timbre with respect to microphone positioning (95). The recurring questions that Chion wants his readers to ask are “What do I hear of what I see? What do I see of what I hear?” (189). Ultimately, the processes of analysis are most interesting for Chion when they free the spectator from the “causal yoke” between sound and image (“I hear X sound because of X image”) and reflect on large-form organization between sound and image within a the narrative as a whole (185).
Chion’s equalization of all sound in film results in his giving relatively little attention to film music strategies or conventions. Traditional terms such as “diegetic” and “non-diegetic” are reconceived as “pit music” and “screen music,” referencing the implied source of musical sound (80). This terminology, as much as it guides one to identify the minutia in audiovisual pairing, doesn’t fully broach the broader narrative questions presented by a film. For Chion, the meaning made between a paired sound and image can occur with any sound/image pairing, yet his statement that these sounds (as part of an intentionally constructed film) were made “independent of any rational logic” is questionable (64). For consideration of how music and other sound provide broader narrative support in film, the reader may wish to consult a supplemental source such as Ben Winters’s 2014 book, Music, Performance, and the Realities of Film: Shared Concert Experiences in Screen Fiction.

The film repertory from which Chion draws his illustrative examples is predominantly French New Wave, American film noir, and international experimental film. (He also makes interesting forays into sound temporalization in Japanese films and lip synchronization between Italian and French film studios.) This second-edition text includes many new examples of twenty-first-century Hollywood productions and includes a chronology of films that can serve as a reference on the changing world of sound through the history of film.
Ultimately, this book encourages readers to rethink their assumptions regarding the use of sound in cinema and to question in minute detail the roles of sound in a film’s artistic structure. In an age where video media is increasingly raining sound on all aspects of life (education, entertainment, news), Chion’s book is, for this reader, a welcome invitation to stop and consider what some of these sounds might mean.

Edward C. Knoeckel is Adjunct Professor of Music at George Mason University, where he received his DMA in Music Composition. He is a composer and pianist with interests in film music and instructional design and technology. He authored Music in Motion Pictures, the Early Years 1900-1960 (Kendall-Hunt, forthcoming). www.theworldheard.com

Edward C. Knoeckel is Adjunct Professor of Music at George Mason University, where he received his DMA in Music Composition. He is a composer and pianist with interests in film music and instructional design and technology. He authored Music in Motion Pictures, the Early Years 1900-1960 (Kendall-Hunt, forthcoming).