The Female Voice in the Twentieth Century: Material, Symbolic and Aesthetic Dimensions, edited by Serena Facci and Michela Garda 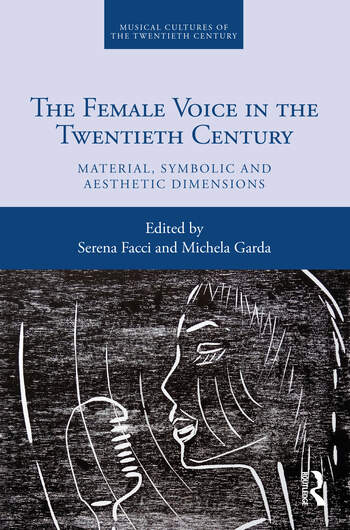 Perspectives on both voice and gender frequently occupy researchers across musical and other disciplines. Recent scholarship in these areas is further propelled by overdue reckonings with gender understanding and equity, as well as ongoing fascination with the infinite treasury of inquiry surrounding the human instrument. The twentieth century presents uniquely rich material for such explorations, owing partly to tumultuous shifts in nearly every arena. Developments in feminism, musical technology, and artistic expression lend additional poignancy to this crucial period. The eleven authors featured in The Female Voice in the Twentieth Century: Material, Symbolic, and Aesthetic Dimensions draw on these contexts to together present a colorful, multidisciplinary retrospective.

Editors and authors Serena Facci and Michela Garda do not explicitly contend with contemporary gender discourse in their preface, but readers can expect that references to the “female” voice encompass discussions of the philosophical feminine, women characters (e.g., Eurydice), and with no exceptions known to this reviewer, cis-gendered women performers. This is also a primarily Western-focused volume, save for Virginia Danielson’s contribution on women’s voices in Cairo. The volume contains an abundance of theoretical discourse, including many references to twentieth-century frameworks surrounding language and the voice. Basic familiarity with the theories of Jacques Lacan, Julia Kristeva, and Roland Barthes will make it easier for the reader to discern the intentions of some of the volume’s authors. Adriana Cavarero is another writer active in this area, and her contribution, “Vocalizing Honey,” is strategically positioned as this volume’s opening chapter.

The chapters of The Female Voice in the Twentieth Century offer a varied assortment of distinct viewpoints. The body of the book is structured in two large parts. Similarities in topic or approach—some obvious and some less so—create an intricate web of scholarly vignettes through which to engage with the twentieth-century female voice. Cavarero’s evocative foray into the metaphor of the “honeyed” voice, for example, is the first of many philosophical adventures of the volume, with Garda’s later “How female is the voice? Conceptualisations and Practices” serving as one of the more conspicuous offerings in this theoretical vein.

Facci and Garda identify increasingly individualized vocalism as a hallmark of twentieth-century female vocal practice, and it follows that commentary on singers’ sounds and the related artistic and societal implications is found throughout the volume. For example, Marco Beghelli, in “Maria Callas and the Achievement of an Operatic Vocal Subjectivity,” delves into Callas’s famously unique voice, her upending of the female operatic ideal, and her reclaiming of singers’ artistic control. True to the aim of including multiple genres and styles of music, other authors consider the sounds and impact of folk singers (e.g., Joan Baez, Rosa Balistreri), jazz/multi-genre singers (e.g., Nina Simone, Abbey Lincoln), experimental singers (e.g., Joan La Barbara, Michiko Hirayama), and in the case of Pamela Karantonis’s “Remediating the Female Voice in Extremis(m): The Human Voice (1966),” a film actress (Ingrid Bergman).

The role of the female voice in cultural and political landscapes is a pervasive theme of this volume, and several authors take up this mantle explicitly. “Women’s Voices in Cairo, Egypt, at the Turn of the Twentieth Century” by Virginia Danielson is one notable example. Unique in scope and subject, this chapter represents the sole cultural examination of the female voice outside of Western regions. Danielson’s work helps replace incorrect and incomplete narratives on women’s musical voices in twentieth-century Cairo, identifying the central role and agency of those voices in many facets of Egyptian culture, including political defiance.

Facci and Garda powerfully argue the centrality of the female voice, particularly as both agent and representative of innovative upheaval. Perhaps the clearest evidence presented is in the realm of woman-dominated experimental vocals, plumbed by both Garda (“How Female is the Voice? Conceptualisations and Practices”) and Veniero Rizzardi (“‘Hear What I Feel’: Joan La Barbara, the 1970s and the ‘Extended Voice'”). Julian Johnson, in “Writing the Female Voice from Debussy to Boulez,” approaches female vocal centrality from a different vantage. With vivid musical analyses, he traces a path through selected modernist works, characterizing the material for the female voice as a tangible expression of extreme tensions between sound-body and language. Yet another analytical angle is taken up by Michal Grover-Friedlander (“Eurydice’s Voice in Contemporary Opera”). She examines the treatment of the character of Eurydice herself, tracing how the evolving portrayal of Eurydice reshapes the myth and asserts Eurydice’s agency. The developing power and agency of female voices—as characters, creators, dissenters, and innovators—is a common theme.

Disciplinary variety is a strength of this book and its parent series (Musical Cultures of the Twentieth Century), and the volume reads true to its origins as a multifarious collection of topical conference contributions. The original conference, which shares this volume’s title, took place in March 2018 at the Institute of Music of the Giorgio Cini Foundation in Venice. Musicologists, performers, philosophers, and others with intersecting interests are all likely to find compelling offerings. The depth and breadth of thematic nuance, both within and between the rich chapters, is a captivating feature. Especially due to the variances in style, idiosyncrasies in flow should be expected. Readers may find some aspects of the chapter ordering and the loose two-part organization more cumbersome than elucidating. Beyond gender and global considerations, the volume has a conspicuous lack of attention to female composers, and questions remain regarding ensembles of female voices and the collective female voice. Furthermore, although somewhat beyond the scope of this volume, inclusion of empirical approaches would enrich examination of this topic. Like many volumes of its ilk, it is not designed for specificity of focus. Pedagogical use of the entire text, for example, would be most efficient and cost-effective in seminars already designed as multidisciplinary ventures.

This volume offers a number of musical and music-adjacent attractions for voice-interested scholars, although readers may find themselves both fascinated and frustrated in turn by the collection’s eclecticism and the occasional disjuncture of the reading experience. The thematic commonalities throughout may help to lend to a satisfactory sense of the whole, at times deftly balancing frustration with delight when unanticipated threads reveal themselves. Facci and Garda successfully fulfill their promise of presenting a selection of differing and novel perspectives on the twentieth-century female voice. Much like the conference from which it was born, the book is poised to ignite new curiosities and illuminate new pathways to explore.

Sarah Bowe is a multifaceted choral artist, active in research and performance as a conductor, soprano, and educator. She is currently appointed as Assistant Professor of Choral Music Education at Queens College (NY). She has also served on the choral faculties of Cornell University, University of Massachusetts Amherst, and Central Connecticut State University.