The Music-Driven Syllabus: Using Music Notation and Content to Engage Students with the Syllabus

Persuading students on the importance of reading the syllabus and synthesizing its content is a long-standing challenge in higher education. One of the most time-consuming aspects of teaching is responding to student emails, especially when the information students seek can be easily located in the syllabus. But what if you could make one small change to the syllabus that not only gets students to read it but also helps them internalize the information and interact with course content?

Most syllabi typically contain a litany of text-based content. Faculty often seek ways to make the information both available and obvious. For example, in a discussion of music history syllabi, William Everett advocated for employing bullet points to organize information (Everett 2012, 10). Students respond better to syllabi that display content visually. A “graphic syllabus” highlights important information using images. A project I developed took this idea one step further. I found that placing short notated melodies in my music history course syllabus—melodies derived from pieces that my students were going to study that semester—helped highlight important policies and improved students’ reading of the syllabus.

In our technological world, students respond to visual stimuli more than written material. One study concluded that students who received syllabi with images described them more positively than those without images (Harrington and Gabert-Quillen 2015, 239). Studies on the graphic syllabus have illustrated that students who were enrolled in courses with visual rather than text-based syllabi were more engaged and viewed the course and the instructor more positively (Ludy et al. 2016, 1). In a world where students crave instant gratification in the form of short posts on Facebook, Snapchat, and TikTok, the traditional syllabus is not only outdated but also contains too much text. Even recently-published textbooks are more graphically oriented than those published a decade ago. Students today may be more attuned to visually-oriented syllabi than text-based ones, with information conveyed through color, images, and charts (Pacansky-Brock 2012).

The music-driven syllabus is an extension of the graphic syllabus. I have an identification tag on my instrument case with decorative music notation. Almost every time other musicians would see it, they would sightread it and I wondered about the implications of adding music to a document that students typically do not read. The policies in the music-driven syllabus are strategically set to melodies from pieces that the students will learn that semester. This is a manipulation of processing fluency, or “the subjective ease with which information is processed,” where students receive visual cues about the most important details to help them navigate the information (Guenther 2012, 946). Researchers examining music as a mnemonic device by setting unfamiliar text to familiar melodies have discovered that long-term recall is significantly higher when memorization tasks incorporate music (Rainey and Larsen 2002, 181).

At least one example existed of a music theory professor setting his entire syllabus to music using a familiar earworm in the nineteenth-century canon—Gilbert and Sullivan’s “I Am the Very Model of a Modern Major General” from The Pirates of Penzance—and posting it on YouTube (unfortunately, it is no longer available). This musical syllabus contained not only the policies for the course but also the course objectives and an overview of the material to be covered that semester. While the video surely solicited some laughs, there is some promise in this approach given music’s ability to serve as a mnemonic device for learning.

I piloted a music-driven syllabus project in the school of music at a state university where I have taught since fall 2013. My project was sparked by personal observations, and it is important to note that it was not intended as a scientific study (though I hope to be able to expand it in the future as such). I first performed this experiment in spring 2018, in the second semester of the music history sequence covering music from 1710-1890. Since the music covered in the course was from the common practice period, some of the melodies were already familiar to students. I continued the project a second time in fall 2018 for the first semester of the music history sequence, which covers music history from 800-1710.

Upon distributing the syllabus, I noticed several students sight reading some of the melodies on their own without being prompted; as most of us know, putting a score in front of musicians is like putting honey in front of flies. During my first class, I mentioned that the syllabus would look different than any other they had ever received and one student shouted “It has music in it!,” indicating that they had perused it on the course website beforehand. I distributed the syllabus and the students examined it. The students were asked to learn the melodies and the words by the following class two days later. I emphasized the importance of learning the melodies but I did not explain why since I did not want to color the results of my pilot project in any way. My thought was that the students should treat this syllabus as any other they would receive.

Examples of the differences between the syllabus with and without notation for both fall and spring semesters can be found in figures 1, 2, and 3 below. For this example, the music-driven syllabus emphasizes the two most important parts of the attendance clause. First, the number of absences allowed is set to “Una voce poco fa” from Gioachino Rossini’s Il barbiere di Siviglia. Information about the number of late arrivals and early departures that students were allowed was set to “And Then Shall Your Light Break Forth” from Felix Mendelssohn’s Elijah. For the first semester, the number of absences was set to the cantus line of Claudio Monteverdi’s madrigal Cruda Amarilli while the information about late arrivals and early departures was set to the cantus line of John Dunstable’s motet Quam pulchra es. 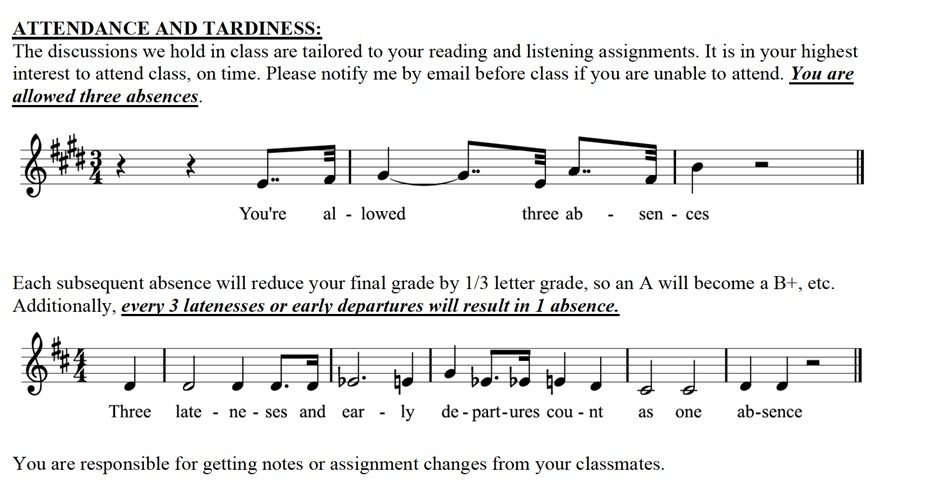 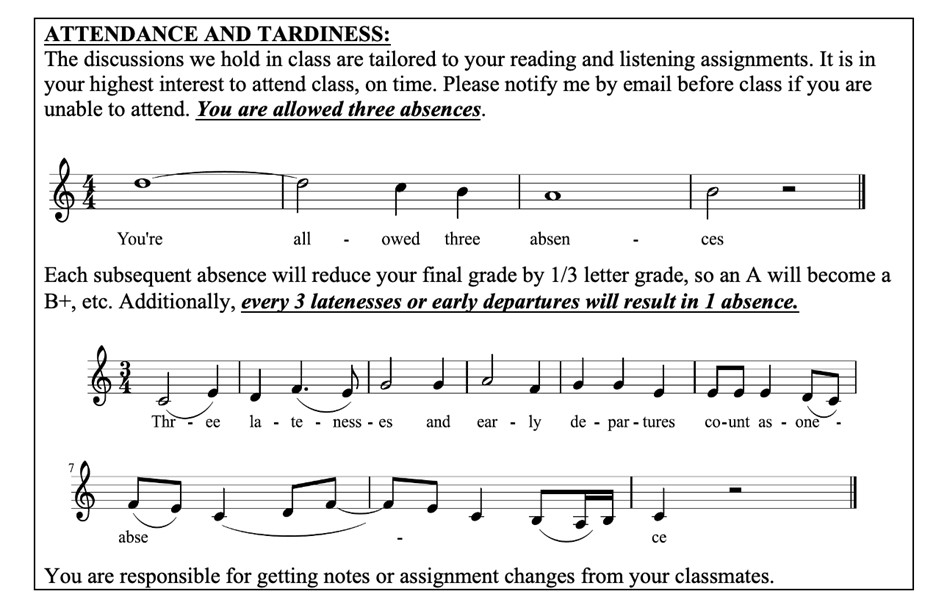 Because of the melodies, some of the text had to be modified and some policies shortened. Since the students had a wide range of abilities, I did not remove the information that was set to music from the text; rather, I replicated it in case a student needed to use text-to-speech software so the program could read it.

Until this project, my syllabus layout had always remained the same. In previous semesters teaching at this specific university, 50-75% of emailed questions could be answered by reading the syllabus. I reviewed the student emails I had received since fall 2013 and categorized them so I could see the effect of using musical examples in the syllabus. Table 1 displays a breakdown of the syllabus-related emails I received before employing music-driven syllabi. Emails about policies concerned late work and attendance. Emails about due dates pertained to the dates by which students needed to complete reading, writing, and listening assignments. Emails about exams referred to anything exam-related, including the format, dates, and material. Last, emails about assignments concerned the parameters of and directions for class assignments. Since students inquired about these specific areas via email despite that content often appearing in bold, italics, and underlined in my syllabi, I chose those areas for musical notation examples in my music-driven syllabi. Incredibly, in both semesters where I used the music-driven syllabi, I received zero emails about any of these aspects of the course.

All semesters included two sections with an average combined enrollment of 40 students except fall 2016 and fall 2018, both of which included one section of 25 students.

Musical content of this nature can be incorporated into electronic syllabi and permits the incorporation of multiple media to create an “interactive course manual” (Gifford 2003, 7). The downside of using a music-driven syllabus is that it only works with students who read music. However, it allows multiple levels of information retrieval, which can be used in different contexts. As with any map, a good syllabus should contain guiding information for getting from point A, or the course’s beginning, to point B, the course’s end. Typically, maps contain symbols and codes for doing so. The music-driven syllabus provides such a roadmap using symbols and codes music students are used to: notation.

Langendorfer. 2016. “Student Impressions of Syllabus Design: Engaging Versus Contractual Syllabus.” International Journal for the Scholarship of Teaching and Learning 10, no. 2. https://doi.org/10.20429/ijsotl.2016.100206.

Reba Wissner is Assistant Professor of Musicology at the Schwob School of Music at Columbus State University. She is the author of numerous articles and books on music history pedagogy, seventeenth-century Venetian opera, Italian immigrant theater in New York City, and film, radio, and television music.