Software and hardware company Steinberg is no stranger to the digital audio workstation (DAW) market: its flagship program, Cubase, has been available since 1989, making it one of the oldest existing DAWs in the industry. Cubasis is a fully-rewritten version of its older sibling, meant to bring the full DAW experience to mobile platforms. This review concerns the paid version of the app.

Cubasis allows users to natively write, edit, and mix audio and MIDI projects, utilizing a plethora of tools and sub-menus. Users of Steinberg’s Cubase will find the interface exceedingly familiar, as it was designed from the ground up to mimic the older program’s workflow. Audio and MIDI tracks exist on the program’s main timeline, while other features like the mixer, edit window, and channel effects window exist as collapsible panes on the left and bottom portions of the screen. Double tapping on any audio or MIDI element opens the Edit window, which allows for fine-tuned work utilizing the device’s touch screen interface. Touchscreen controls are highly responsive, allowing for the user to adjust and edit their project with relative ease. Figure 1 demonstrates the default view of the audio timeline with the Edit window open. 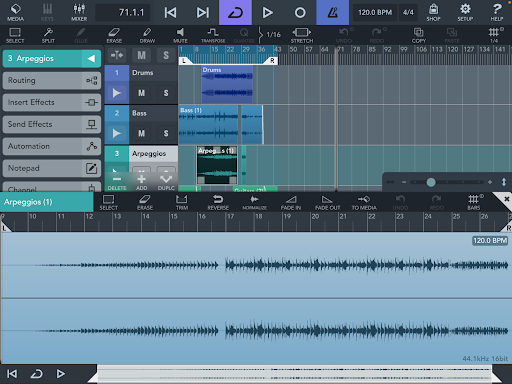 The program comes with a commendably large array of built-in effects units, enabling most of the functions of a modern audio editing program. Track defaults include the Channel Strip (with its handy collection of basic effects like Low/High Cut filters, Noise Gate, Compressor, and Saturator; see Figure 2), a four-band EQ, and space to optionally add other effects. Most impressively, each track can also take advantage of send effects, allowing for creative use of time-based units like Reverb and Delay on a track-by-track basis. Automation is also incorporated into each track, a must-have feature for modern audio production. 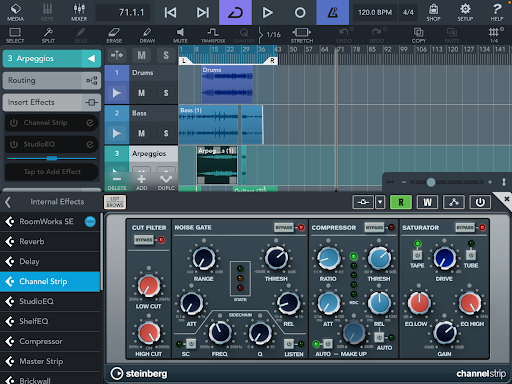 Cubasis utilizes two useful data routing systems called Inter-App Audio and Aubiobus 3, respectively. These two features allow for expressive and creative uses of the wide variety of audio apps available on iOS devices today; in practice, though, both protocols proved to be slightly buggy and overly-complex to handle on a touchscreen device. Much more useful is Cubasis’s support for MIDI hardware and external audio interfaces. Steinberg maintains a large list of compatible hardware devices with Cubasis, and plugging into the program is a simple and relatively painless process. That being said, I have encountered a few occasions where certain audio hardware devices did not immediately connect, and as is often the case with mobile devices, a variety of adapters and/or a powered USB hub are required to take full advantage of Cubasis’s hardware functionality. This is not unique to Cubasis, though, and any dedicated user of mobile audio software will likely already have the required accessories.

In summary, Cubasis is a supremely competent and engaging mobile DAW, with only a few small hiccups. For occasions where a light and mobile DAW would suffice (such as recording and editing personal projects or editing on the go), Cubasis makes a fine solution. At $49.99, the price of entry is a little on the steep side, but given the value and functionality that is packed into this program, one can make an argument that the price is worthwhile.

Aaron Hynds, DMA, Bowling Green State University, is a Kentucky-based audio engineer, low brass performer, and composer. He is currently Lecturer of Music Business and New Media at the University of Kentucky, teaching courses in audio recording and the music industry. He also directs the RocKats rock ensemble. His creative practice as both performer and composer focuses on the intersection of digital and analog domains, with a particular emphasis on the use of his primary instrument, the tuba. He has performed widely throughout the United States, with many recent performances consisting exclusively of newly-written compositions for the tuba and bass trombone. And as a composer, his compositions have been performed in a number of venues around the country, including the 2022 Great Lakes Regional College Music Society Conference and the 2022 Great Plains Regional Tuba-Euphonium Conference. Upcoming projects include the performance and engineering of a double-CD of commissioned works for the tuba entitled Colossus: New Works for Solo Tuba, and the publication of a new textbook on audio engineering (Taylor & Francis).