Performance and the Laborde Chansonnier: Authenticity of Multiplicities—Ornamentation and Other Performance Problems

This paper was part of a panel entitled "Performance and the Laborde Chansonnier: Authenticity of Multiplicities" which was presented for The College Music Society at Baldwin-Wallace College, November 8, 1969. The moderator was Robert Austin Warner. The other panelists were Gwynn S. McPeek, David Crawford, and Edith Borroff. Their papers also appear in SYMPOSIUM Volume 10.

By and large, there is little difference between the performance decisions faced by a fifteenth-century group of performers and those faced by a collegium musicum today. And if anything is clear, it is that the earlier group would have had fewer inhibitions about matters of textual and musical adaptation, textual underlay, musica ficta, the choice of voices and/or instruments, and ornamentation. At least it is difficult not to come to this conclusion if one considers an example from the Laborde Chansonnier, Philippe Caron's lovely rondeau "Helas! m'amour, ma très parfete amye" in some of its many settings:

Thus, having been asked to say a few words about fifteenth-century ornamentation in this symposium and also to introduce performances of a composition from the Laborde Chansonnier, as taped by our Collegium Musicum under the direction of Professor Gilbert L. Blount, it occurred to me that it might be useful to draw some practical observations from these four settings of Caron's composition. (Hereafter we shall refer to them respectively as Lab, Odh, Trent, and Glogauer.)

Before proceeding, however, some clarification is needed regarding the sources used for my comments and for the musical performances by the Collegium Musicum. For the Lab setting we were furnished with photocopies of Professor Gwynn S. McPeek's transcription. At that time this selection had underlaid only the refrain of the rondeau text. Also, there were a few places where problems had not been fully resolved. Professor McPeek was kind enough to furnish a facsimile of the manuscript and the missing texts. Meanwhile, some even more serious musical problems (e.g., three parallel fifths in measure 19) prompted me to undertake a new transcription, especially for the second half of the composition. Inasmuch as this also affected Professor McPeek's textual underlay, and I was not fully acquainted with his criteria, I attempted to underlay the text as closely as possible to that of the manuscript itself. In general this came rather close to the solution in Helen Hewitt's edition of Odhecaton A, No. 13, pp. 246-248. The addition of the si placet part from Odhecaton A was an experiment. The only problem was the cadence at measure 23. Odhecaton A solves it by a cadence to D, and with a few different notes. My own solution was a cadence to G. Otherwise, there is relatively little difference between the Odhecaton A transcription with the si placet part and my Lab transcription with the si placet part added.

Textual underlay was attempted for all voices, including the si placet part. The criteria were: (1) to treat the imitative parts similarly; (2) in the beginning, not to disturb the presentation of the main thematic ideas of the soprano and tenor parts (thus the si placet and contratenor parts vocalize, somewhat, in their opening phrases); and (3) where similarities between the four parts are not apparent, to use the available notes, melodic design, and possibilities of vertical alignment as a guide. In regard to syllabification, the text seems to be entirely hendecasyllabic, and the manuscript also supports the older pronunciation of "a-my-e," so the textual underlay was modified accordingly. Helen Hewitt was apparently also of this opinion in her transcription of Odh.

Alternate musica ficta suggestions were made for the a 3 version and the a 4 version (with si placet part added). From the variety of fifteenth-century settings it seems clear that performers of that time were also aware of this problem and variant solutions.

The Trent setting was transcribed by our Collegium Musicum director, Professor Blount, inasmuch as Adler's transcription (see DTOe, Jg. VII, Bde. 14-15, pp. 248-249) represents more of a collage than a faithful adherence to the main manuscript source. Although the Trent version seems to be designed for instrumental performance, and is textless, Adler adds an alto si placet part and underlays all four voices with the text "Helas, que pourra devenir."

For the Glogauer setting we have used the source previously mentioned, with the exception that it was necessary for Professor Blount to modify the textual underlay in several places.

Now, ornamentation can be considered from at least three different aspects:

1. Compositional—i.e., as worked out by a composer for one kind of medium or another, and sometimes going as far as parody.

2. Improvised on a large scale—dependent on the kind of medium. In general, when we attempt to do this today we base our judgements on much later practices.

It is the latter that I would like to discuss, with the suggestion that a comparison of the various sources for a specific composition might be a fruitful avenue to explore for fifteenth-century figuration. In this regard a comparison of figuration for Caron's rondeau in Lab, Odh, Trent and Glogauer can perhaps serve as an introduction.

In Example 1, Trent, apparently designed for instrumental performance, and Glogauer, with a sturdy Latin text, do not ornament the suspension figure as frequently as do Lab and Odh, both designed for more supple French texts. Moreover, even where it might be desirable to try the ornamented version in other places within the composition, it will not always fit the harmonic situation.

In Example 2 we see still other ways of ornamenting a suspension figure. In this case it is clear that cadential articulation was the primary motivation.

In Example 3 we can only deduce that either simple or ornamental cadential figures are often feasible and that the latter might well be used if desired.

EXAMPLE 3. Suspension figure with ascent of fourth and lower auxiliary, revolving on F.

In Example 4 we can see that the impetus toward a cadence can be ornamented in a variety of ways, all perfectly suitable. 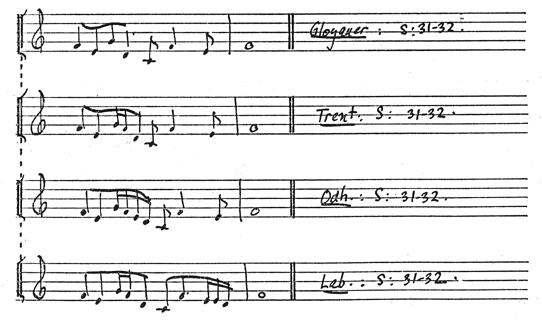 In Example 5 we see a contratenor line that moves toward a lightly demarcated, less important cadence. All solutions are attractive in their own way and reflect a high degree of personal taste. 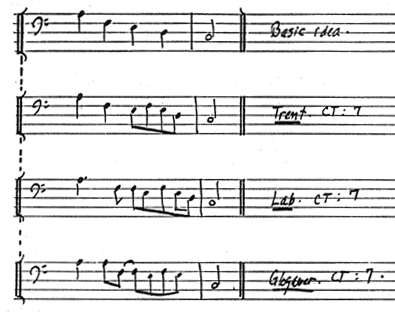 In Example 6 we see two different anticipation figures. Although anticipation may be used elsewhere, one might conclude that its most important use is in the cadential figure, and if it is feasible or desirable it will often be indicated in the manuscript itself.

In Example 7 we see that some of the kinds of figuration already mentioned are often part of a larger design and are especially effective in a strong cadential drive. 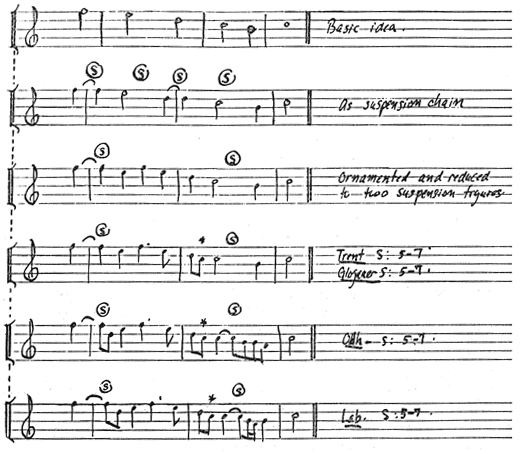 But even if we might be able to expand our vocabulary of fifteenth-century ornamental figuration through further comparative studies—as seems most plausible, even to the extent of detecting subtle regional preferences—their application to music of that time by a present-day collegium is ultimately a matter of personal choice and available time. In this regard, the following general observations may be useful:

1. The more complex a piece is rhythmically, the less desirable it is to further obscure the main compositional lines by excessive ornamentation.

2. The main objective should be to provide a reading that is aesthetically desirable for audiences today. A melodic line already beautiful in concept should not be unnecessarily distorted.

3. Good taste would seem to suggest that moderation is the best policy. The safest place to employ ornamentation is at points of cadential articulation.

4. A good way of gaining a sensitivity for varying ornamental possibilities is to perform several versions of the same piece with a variety of vocal and instrumental solutions.

It is the fourth point that has been illustrated in the five excerpts of the Caron rondeau recorded by the University of Texas Collegium Musicum under the direction of Professor Blount, as follows:

3. Soprano and three tenor voices. Laborde, No. 4, plus si placet part from Odhecaton A, transcription by Grubbs.

The composition is very effective with soprano voice plus two instruments, and also with soprano and tenor voices plus one instrument. With the latter the excitement and beauty of the canonic passages is especially effective. The use of four voices without instruments is more effective than I would have expected, but this results in a rather dense texture in the upper three voices. One solution not tried with the si placet added, but which would likely be effective, would be to use voices for soprano and tenor parts and instruments for the si placet and contratenor parts.

4. Two tenor and one bass recorders. Trent 89, transcription by Blount.

The Glogauer version illustrates the adaptability and variety in performance of such a fifteenth-century composition. Here one sees not only a typical German title for an instrumental piece, but also the first and third part of a three-part strophe in Latin adapted to music for a rondeau. In essence, the refrain structure of music and text is ignored in this setting. If musicians of the fifteenth century saw no hindrance to adapting to the same music a rondeau quatrain, a rondeau cinquain, and a saincte chansonnette with still another metrical and poetic scheme, we will be hard put to regard any composition of the time as a fixed entity with an ideal solution for solving the performance problems.