Tonal Ambiguity in the Opening Measures of Selected Works by Chopin

During the Nineteenth Century, composers used various means to experiment with and challenge the commonly accepted boundaries of tonality. Consequently, ambiguous tonalities frequently resulted during this period. Arnold Schoenberg1 refers to "floating" and "suspended" tonalities, the floating being those which vacillate between two or more keys, whereas the suspended tonalities are ambiguous or unexpressed, with a rapid alternation between keys. This alternation is commonly achieved through the use of diminished sevenths and other altered chords in transitional passages.

Chopin, although not alone in the use of tonal instability during the Nineteenth Century, nevertheless is innovative in his methods of achieving a suspended tonality. By employing a series of altered chords which have no traditional harmonic function, he creates a temporary lack of tonal center. Gerald Abraham calls these passages "harmonic parentheses"—in other words, coincidental harmonies resulting from the transition from one point to another, either modulating or nonmodulating.2 Although Abraham's understanding of the passages in terms of their tonal instability and nonfunctional harmonies is clear, he still attempts to explain them using harmonic vocabulary. Conversely, Richard Parks describes these coincidental harmonies as a function of voice leading.3 The harmonic progressions serve as melodic, not harmonic, space-fillers. Because they do not function harmonically, no resolution is required. In the analyses within this article, it can be seen that chord labels have little or no meaning, yet a linear analysis of each voice in such passages reveals a pattern of chromatic ascent or descent. Therefore, a linear rather than vertical description is more useful in understanding these passages.

This method of unexpressed tonality is common in the opening measures of many of Chopin's works as well. In determining the frequency of tonal ambiguity in the openings of Chopin's works, Waltzes, Mazurkas, Polonaises, Nocturnes, Preludes, Etudes, Impromptus, Scherzi, and Ballades were examined, resulting in some general observations. The start away from the tonic does not seem to correspond to any chronological period of his compositional career; examples are as frequent in his early period as his late period. Thus, this study is limited to those works published during Chopin's lifetime, eliminating his posthumously published youthful works. There does seem, however, to be a correlation between the particular genre and the number of times opening tonal ambiguity occurs, as will be seen in the following discussion (see Table 1). 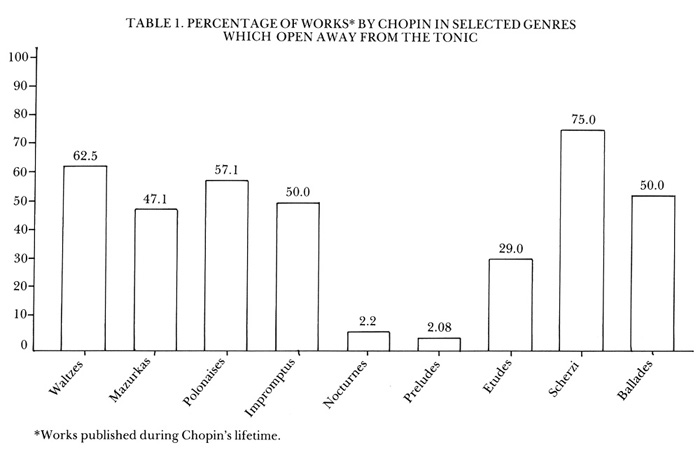 The tonal stability exhibited in the opening measures of most of the Nocturnes could perhaps be attributed to the calm, serene nature of this genre. Tension created by the suspension of the tonal center would have conflicted with the desired sense of repose. In the Preludes, firm establishment of key early in each piece is common, perhaps because most of these works are so brief that insufficient time exists to digress from and return to the tonic (the analysis of the Prelude No. 2 later in this article illustrates an unusual exception). As seen in Table 1, immediate tonal stability is much more frequent in the Preludes than in all other genres.

By contrast, introductions away from the tonic key in Chopin's dances are frequent. The length of these unstable introductions varies from one to more than seventeen measures. Although it is unlikely that any of these works actually accompanied the dance, it is possible that Chopin was conforming to the tradition of setting the tempo and giving dancers sufficient introduction to begin the dance. The opening measures of the dances are much simpler tonally than his larger character pieces. Most begin in the key of the dominant, with an immediate return to the tonic. The complete suspension of the tonal center in the openings occurs most frequently in the Ballades, Scherzi, and Impromptus.

Although the Mazurka is in the key of A Minor, the tonic does not arrive until measure 20; indeed, only two additional root position tonic chords are heard in the entire A section. The harmonic progression of the opening twenty measures reveals a descending chromatic line of various altered chords with each change in harmony resulting from the linear movement of each voice (see Ex. 1)4

This progression exemplifies Chopin's use of implied resolution. Rather than resolving the non-chord tones, the other voices descend to form new harmonies. The F Major, first inversion chord (VI6) aurally functions as an A Minor chord with an F appoggiatura which should resolve down by step to E. Although we never get that resolution, the pull to A Minor is sufficiently strong that the resolution need not be literally heard to confirm it.

The middle section, in A Major, contains an important drone on the A-E open fifth. This drone, along with the A pedal in the twenty-five-measure coda, more than compensates for the lack of A tonic in the first section. The piece closes with the same four measures which opened it, ending on the unresolved F appoggiatura.

The Second Prelude exhibits one of Chopin's most inventive uses of ambiguous tonality. The melodic line is built on a series of descending perfect fourths, resolving upward by step or minor third (see Ex. 2).

Only one break occurs in this pattern. At measure 14, a leap back up to the A begins the descending pattern again. Yet at this point, the resolution is by half step rather than step, which is another alteration of the original pattern. As in the preceding example, Chopin has achieved this instability through linear movement which forms non-functional harmonies. Although Chopin completely avoids root position tonic and dominant chords until measure 21, this analysis illustrates his expression of the dominant of A Minor throughout the entire Prelude. Yet chord labels would prove meaningless in describing this work. The A Minor chord in measure 15 is in second inversion and does not function as a resolution. The tonal stability in the final measure, achieved through a one-measure harmonic progression, is a welcome surprise.

The linear projection from measure 1 to measure 24 in the C-sharp Minor Scherzo is a chromatic descent, moving one voice at a time as in the Mazurka examined above. The chromatically descending line predominates throughout the entire piece. Tonic chords in root position are rare. The opening twenty-four-measure series of altered chords (major first inversion, diminished seventh, and German augmented sixth) give little indication of tonal center (see Ex. 3).

The German augmented sixth (spelled in the key of F-sharp), resolves to C-sharp as it should, though the C-sharp Minor chord functions as tonic rather than dominant. Therefore, it is not immediately apparent even at measure 25 that the tonic has arrived. In addition to this tonal suspension, Chopin opens the work with a rhythmic ambiguity of four quarter notes per measure rather than three.

The opening could be removed entirely from the Scherzo with little effect on the overall structure of the work. Its removal, however, would eliminate the prolonging effect and the emphasis of the tonic when reached.

In this Ballade, Chopin uses a different method to avoid the tonic. Unlike the previous examples, there is an immediate feeling for key in the opening, established through the chord progression V-V7-I-V7/V-V (I-V7/IV-IV-V7-I in C Major). Chopin has established the key of C Major, the dominant, rather than F Minor. Like the Scherzo in C-sharp Minor, the introduction could be detached from the work. Adding the opening, however, heightens the impact of the main theme. The opening is shorter than the others examined above. Only seven measures in length, the upper melodic line as well as the two inner lines descend scalewise, while the root movement firmly establishes the key of C Major. Each line individually expresses the C Major tonic triad through linear projection (see Ex. 4).

In summary, several similarities in Chopin's avoidance of the tonic key in the opening measures of his works are apparent. More often than not Chopin begins his pieces on dominant-function harmonies. Frequently, in his Waltzes and Mazurkas, he moves directly from the dominant to the tonic, but often digresses further from the tonic before stabilizing the tonality. Many serve as introductions which are structurally unnecessary, as in the Scherzo and Ballade examined in this article. Examples of opening tonal ambiguity are more common in his dances and larger character pieces. Although there is no absolute consistency, the length of the introduction is usually proportional to the overall length of the piece, with the dances containing fewer measures of extended tonality. Chopin frequently achieves this tonal ambiguity through the use of progressions of altered chords which have no harmonic function.

From all the examples, we may draw certain generalities regarding the effect of this ambiguity. Particularly in the larger pieces, there is a significant increase in tension through the lack of a recognizable tonal center, creating a stronger pull toward that tonal center. Consequently, the arrival of the tonic creates an even greater sense of relief from the tension. After Chopin, the resolution of suspended tonalities was delayed further or avoided altogether, resulting in a total absence of tonal center, which eventually contributed to the dissolution of tonality.

4For a different view of tonal ambiguity in this Mazurka, see William Thomson, "Functional Ambiguity in Musical Structures," Music Perception 1, No. 1 (Fall 1983), 3-27, where he discusses rhythmic, melodic, harmonic, and structural aspects of ambiguity.